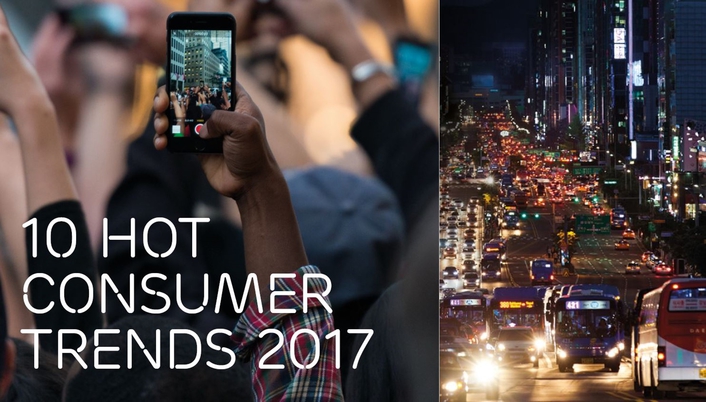 Taking a look into the future, Ericsson (NASDAQ: ERIC) ConsumerLab presents the sixth edition of its annual trend report The 10 Hot Consumer Trends for 2017 and beyond.
AI is an important theme this year and consumers see it playing a much more prominent role than before – both in society and at work. In fact, 35 percent of advanced internet users want an AI advisor at work, and one in four would like an AI as their manager.

1. AI Everywhere: 35 percent of advanced internet users want an AI advisor at work, and one in four would like an AI as their manager. At the same time, almost half are concerned that AI robots will soon make a lot of people lose their jobs. 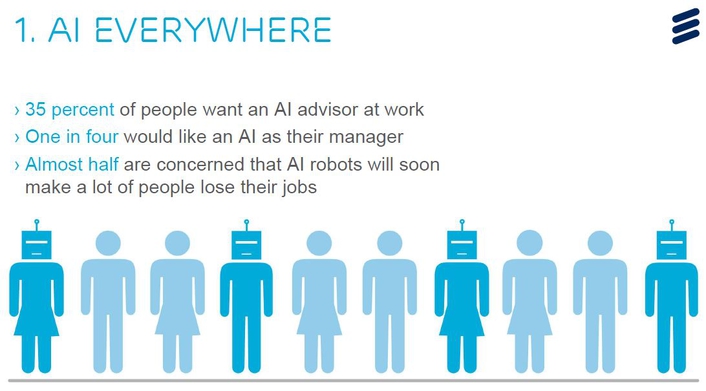 2. Setting the Pace for Internet of Things: Consumers are increasingly using automated applications, encouraging IoT adoption. Two in five believe smartphones will learn their habits and perform activities on their behalf automatically. 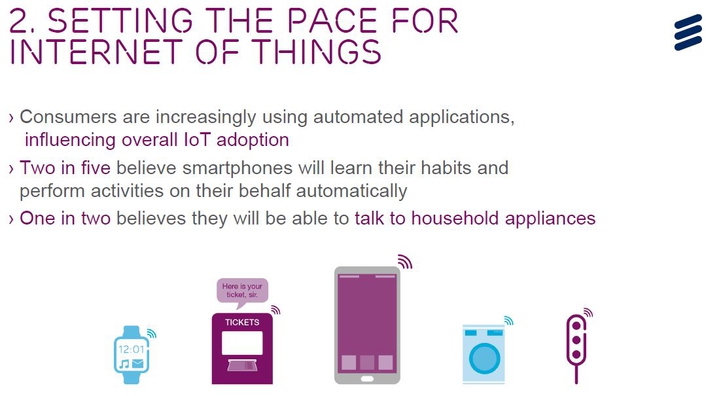 3. Pedestrians Drive Autonomous Cars: Car drivers may not exist in the future. One in four pedestrians would feel safer crossing a street if all cars were autonomous, and 65 percent of them would prefer to have an autonomous car. 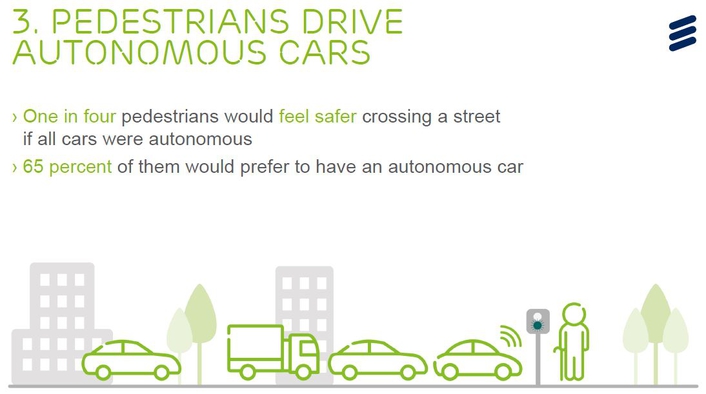 4. Merged Reality: Almost four out of five virtual reality users believe VR will be indistinguishable from reality in only three years. Half of respondents are already interested in gloves or shoes that allow you to interact with virtual objects. 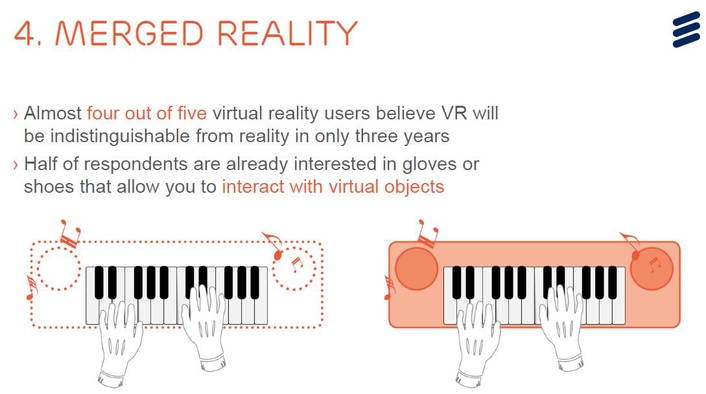 5. Bodies Out of Sync: As autonomous cars become reality, car sickness issues will increase, and three in ten foresee needing sickness pills. One in three also want motion sickness pills for use with virtual and augmented reality technology. 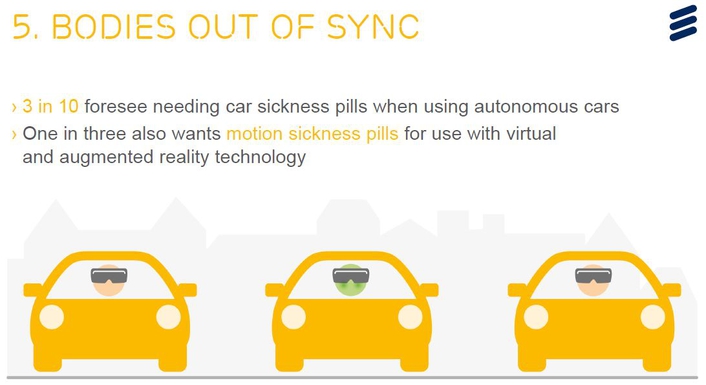 6. The Smart Device Safety Paradox: More than half already use emergency alarms, tracking or notifications on their smartphones. Of those who say their smartphone makes them feel safer, three in five say they take more risks because they rely on their phone. 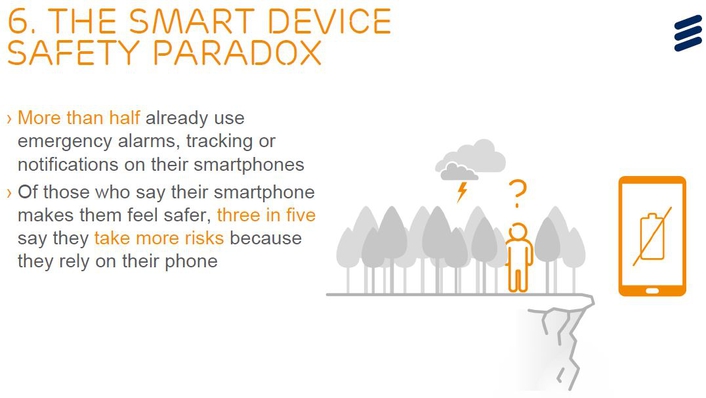 7. Social Silos: Today, people willingly turn their social networks into silos. One in three says social networks are their main source of news. And more than one in four value their contacts’ opinions more than politicians’ viewpoints. 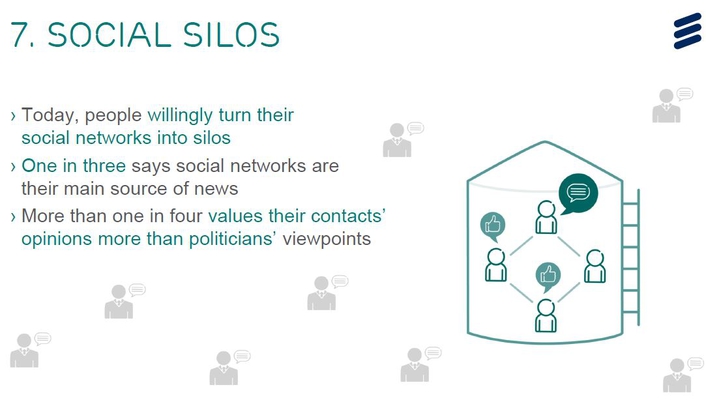 8. Augmented Personal Reality: Over half of people would like to use augmented reality glasses to illuminate dark surroundings and highlight dangers. More than one in three would also like to edit out disturbing elements around them. 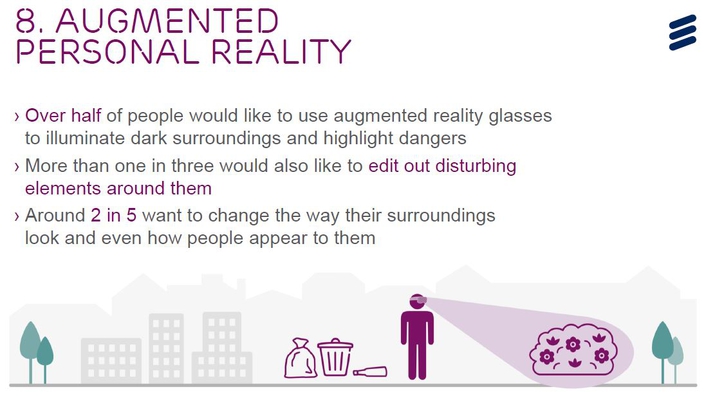 9. The Privacy Divide: Two in five advanced internet users want to use only encrypted services, but people are divided. Almost half would like to have just reasonably good privacy across all services, and more than one out of three believes privacy no longer exists. 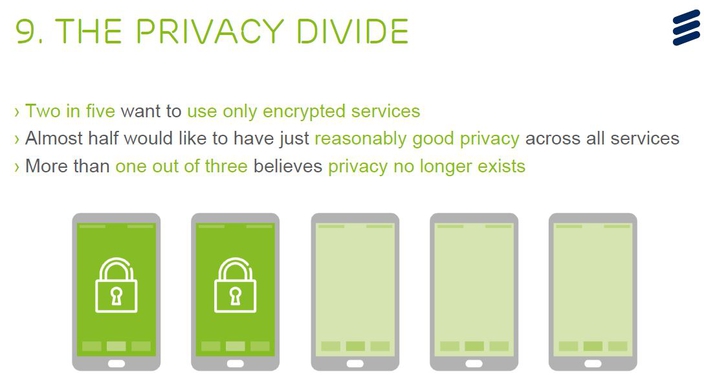 10. Big Tech for All: More than two out of five advanced internet users would like to get all their products from the biggest five IT companies. Of those, three in four believe this will happen only five years from now. 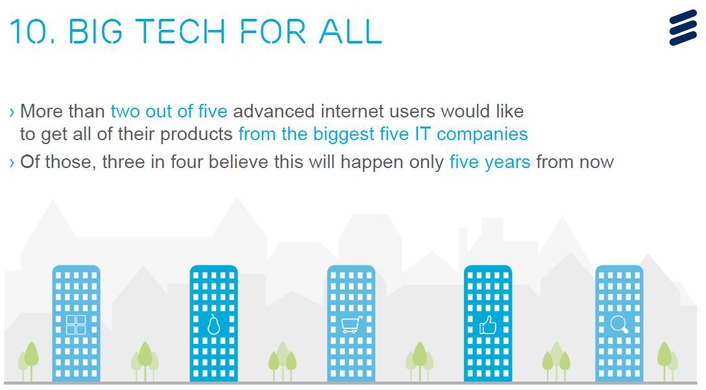 Reflecting on the rise of virtual reality, Michael Björn, Head of Research, Ericsson ConsumerLab, says: "Beyond real time, I believe we should be talking about reality time. In fact, what we call reality becomes ever more personal and subjective. Consumers not only surround themselves with the like-minded on social networks, but also are also starting to customize the way they experience the world with augmented and virtual reality technologies. 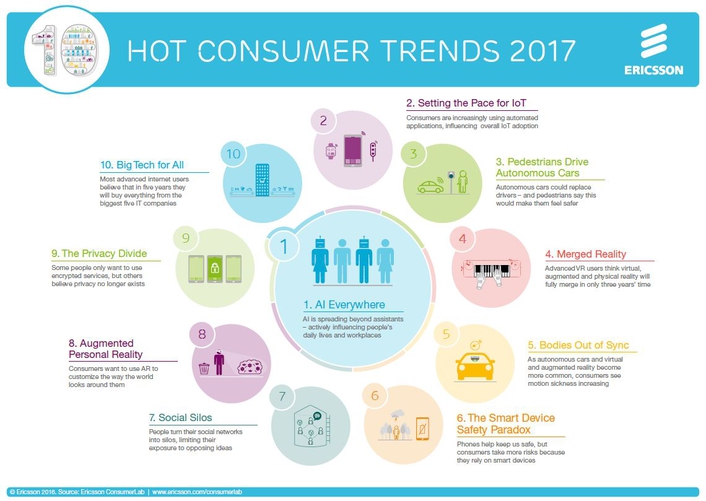 "Consumers also want the future to remain fully mobile, implying that demand for battery-friendly, instant and fast connectivity is set to grow rapidly. In that sense, reality   time means it is time for 5G networks.”
The insights in the 10 Hot Consumer Trends for 2017 report are based on Ericsson ConsumerLab’s global research activities over more than 20 years, as well as data points from an online survey of advanced internet users in 14 major cities across the world, performed in October 2016. Although the study only represents 27 million citizens, their early adopter profile makes them important to understand when exploring future trends.