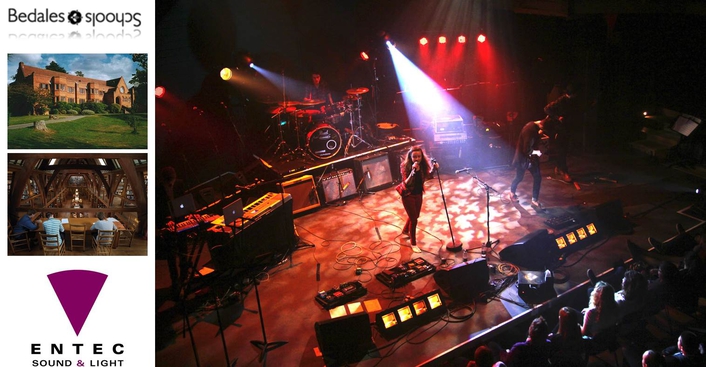 Bedales is one of the UK’s leading independent schools, founded in 1893 by the innovative educator and author John Bradley with the aim of being profoundly different from other public schools of the day. Putting the key elements of the child’s education, welfare and happiness right at the core of its values, Bedales continues to be one of the most sought after educational experiences in the UK, encouraging independent thinking and inquisitive minds to flourish.

Entec’s relationship as a technical partner started 10 years ago with the very first Bedales Rock Concert via the company’s long association with legendary rockers The Who, when guitarist Pete Townsend’s son attended the school.

Entec’s Head of Sound Dick Hayes first worked with The Who in 1969, a relationship that has continued in various different formats to this day, with Entec also gaining the band as a client and servicing their live sound needs in the UK and Europe. Bob Pridden, long time Who stalwart, contacted Dick in 2005 … and the Bedales Rock Concert story began.

The first Bedales Rock concert, recalls Hayes, was a relatively simple affair audio-wise, with a 24 channel analogue console and some speakers.

The theatre is relatively compact, so a stack of d&b C7s a side is a perfect fit,  together with Q7s each side to cover the balcony which goes around three sides. A Protools HD2 hard disc recorder was also part of the package, together with a KT DN9650 network bridge and an SSL Delta-link MADI  interface.

Monitors were run from a Midas PRO2 console, and comprised d&b M4 and E3 monitors. A strings section utilized Shure PSM900 IEMs as space is tight onstage, and a number of Shure UHFR hand-held radio mics were supplied, together with a selection of  Shure, Beyer and AKG mics, plus Schertler transducers for the strings.

Two of Entec’s top engineers crewed the event – Mark ‘Magic’ Ellis-Cope looked after FOH together with Simon Higgs on monitors.

Bedales Rock Concert Organiser and Guitar Teacher Neil Hornsby enthuses, “Entec is an incredible partner of the Bedales Rock Show and their support over the years has turned the event from an ambitious school show into a very special event”.

The Rock Concert has helped launch the careers of several notable ‘old Bedalians’ including  Markia Hackman, Gabriel Bruce, Leah Mason and Freddy Sheed, and in 2008 featured a spectacular special guest performance by Pete Townsend which was “Truly inspirational” recalls Neil.

He adds that they have always prepared for this event as if it is a professional gig, “Entec have helped immensely by buying into this version of it every step of the way and we look forward to this great relationship continuing as we enter our second decade of the Rock Concert”.

As with previous years, the biggest challenge of the show for Entec’s crew was getting the truck out of the tenacious Hampshire mud – especially this year with the biblical proportioned downpours – at the end of the get-out! However an improvement is ‘on the cards’ for next year!!