Entec Collaborates with The Gig Company for Suggs & Friends Event 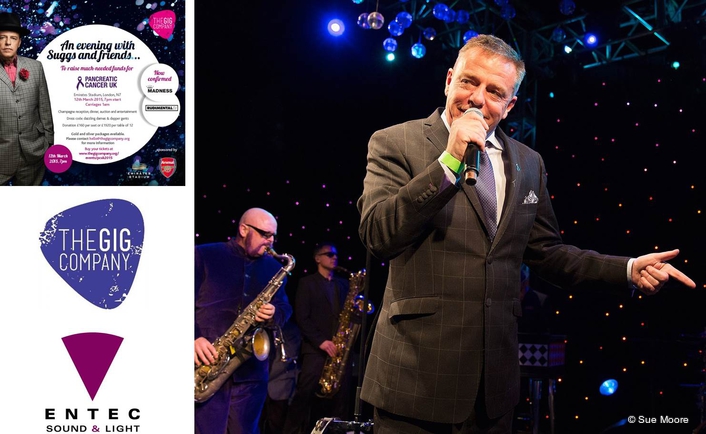 .
The entertainment industry is well known for its enthusiastic support for fund and awareness raising for a wide variety of good causes, and north London based The Gig Company is a boutique specialist event organisation working in this very specific area. They optimise their excellent reputation and many connections with high profile musicians and entertainers to deliver simply amazing experiences.

Entec was proudly involved in a recent collaboration with The Gig Company as technical production partner for “An Evening With Suggs and Friends”, an intimate action-packed showcase staged in the Woolwich Suite at the Emirates Stadium which raised over £130,000 for Pancreatic Cancer UK.

Hosted by Suggs and Stephen Kelly the gala dinner evening included an auction which was presented by Charles Hanson plus incendiary performances from Rudimental and Madness together with a fabulous house band comprising top session musicians.

Entec took care of all aspects of the lighting, sound and staging design and realisation, which was project managed on site for them by Matt Arthur working closely with Noreen O’Riordan and Mark ‘Magic’ Ellis Cope in Entec’s west London base.

Jenny Johnson and Viva McPherson of The Gig Company comment, “It is wonderful working with Entec – as well as bringing a vast amount of event production experience and knowledge to the table, they are friendly and accessible. We trust them to deal with all aspects of the technical production and staging, and they come up with the most fantastic looking and sounding environments every time! Having Entec on-board leaves us free to focus on the many other areas of organising a smooth running and successful event”.

This year, in addition to the site co-ordination, Matt designed the whole environment, which was based on satisfying all the various artist riders and requirements as well as producing something imaginative and memorable for the occasion. Matt’s creative objective was also to produce a jazz club type vibe - moody, comfortable and personal - for the 400 guests.

The space is around 60 metres wide by 13 deep and gently curved to follow the architecture of the stadium, with a balcony / mezzanine level covering part of it, so the decision was made to build the stage shallow side on, with a dancefloor immediately in front and tables to the side and back of the room. 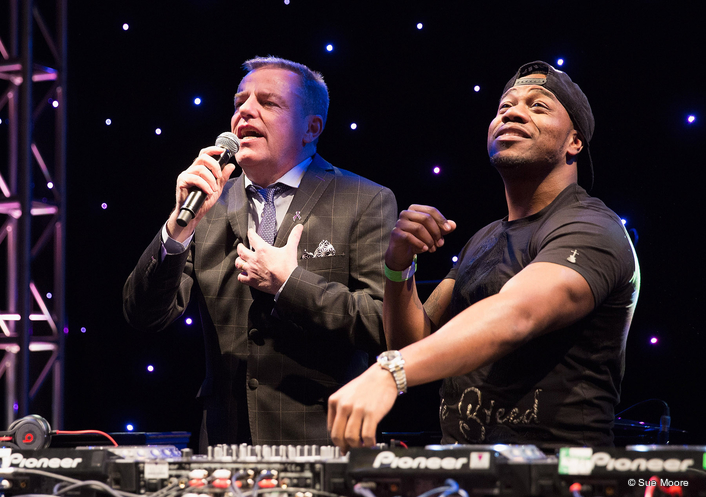 There were no flying facilities, so a four legged ground support system was installed measuring 6 x 6 metres with 6 metres of headroom. The stage which was also 6 x 6 metres but with two upstage sections cut out to accommodate two of the stadiums’ structural pillars which penetrated the room. Having to do this also helped create enough upstage space for dimmers, storage and an AV control position for those running the auction.

The ground support was constructed from 12 inch trussing with regular A-type truss box  sections, and when built, cleared the concrete structural pillars by about 10 cm … so the placement was somewhat crucial!

For lighting, Matt chose primarily moving fixtures as power was limited. Moving lights also proved the most effective solution for lighting the band performances and creating a nice ambience for the dinner section of the evening. On the two side sections and along the back, 11 x Martin MAC 700 Washes were rigged four on each side truss and three on the back on outriggers off the top chord of the truss, so there was some definition between them and the spots hung on the lower chord. The side lights also helped fill the stage when there was no-one onstage.

Four out of six Clay Paky Alpha Spot 300 HPEs were positioned along the rear truss and one on each upstage end of the truss grid.

Eleven MAC 250 Beams joined the party, with four on the front truss to illuminate the dancefloor in front, six on the floor upstage for back beams and the remaining three on the balcony above the FOH area also pointing towards the dancefloor.

Nineteen ETC Source Four profiles fitted with a mix of 26 and 36 degree lenses provided the main key light, with the 26s highlighting the main band members and the 36s adding some general filler for artists as they moved around and for people making speeches and presentations. 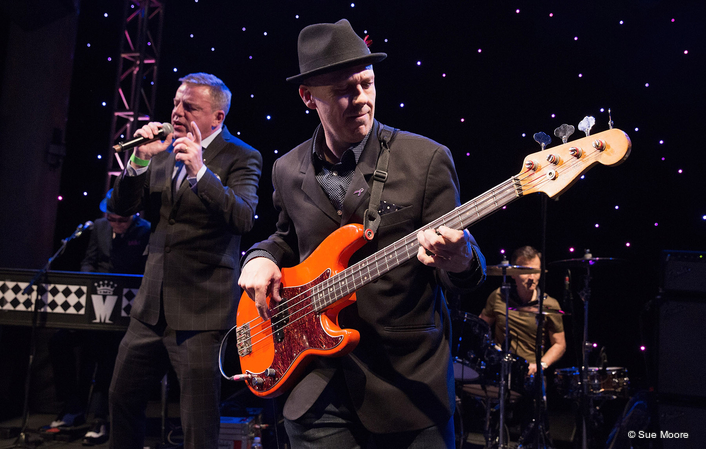 Two with 36 lenses were rigged lower down on the front legs of the ground support where they were ideal for Rudimental’s vocalist and any others strutting along the downstage edge of the stage.

The ground support legs and box truss were toned with i-Pix Satellite LED ‘bricks’, turning the whole ground support structure into an architectural centrepiece, while a couple of pairs of 2-lite blinders each side brightened the room and helped boost the excitement levels during the auction.

The stage and wing areas were draped with an LED starcloth, and to create some technical areas back stage and extend the drapage outwards, two further 6 metre wide ‘wings’ of black Bolton drapes on pipe-and-stand were added each side where the starcloth ended.

The room itself was lit with fixtures placed on eight 4 metre high vertical 12 inch trussing towers on floor bases, each  with an Alpha Spot 300 HPE on top and two MAC 250 Washes  on cross pipes lower down.

On the balcony / bar level in the corners of the room, two wind up stands rigged with more Mac 250s and Alpha Spot 300 HPEs were deployed to be able to fill out the room with light when needed, and two more similar stands / lights were located in the middle of the reception area.

No haze was permitted in the building, so it was all about big bold washes,” explains Matt adding that he beamed gobos onto any surface that looked effective – including the roof, dining tables and blinds! 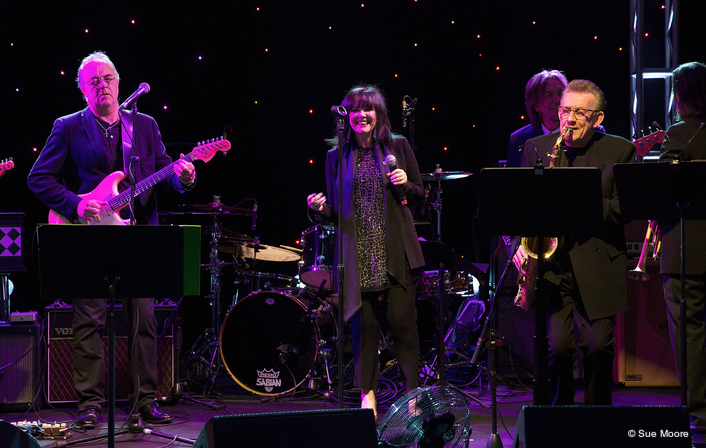 Matt worked alongside a top Entec lighting crew of three: Simon “Boff” Howarth, Simon Honnor and Steve Major. The show rigger was the superb Firmin Moriarty who has worked The Emirates room many times before.

On the sound side, Entec’s James Kerridge co-ordinated the project for which a d&b system was supplied comprising four d&b V8 speakers flown off the ground support to cover the width of the room, together with three T10s further down the space for delays.

A couple of Y10Ps were used to cover the dancefloor, with two V-SUBS and two B4s stacked side-by-side. A smaller set up of four E12s was provided as a stand-alone system in the bar area.

The consoles were Avid Prolife for FOH and a Yamaha PM5D for monitors.

Onstage the wedges were d&b M4 and M6s, and these were used combined with Q7 / Q-SUBS sidefills, and Entec also supplied a Sennheiser 2000 IEM system. Madness supplied some of their own microphones, with the rest supplied by Entec, including new Neumann KM184s which are added to their rental stock.

Liam Halpin took care of the FOH engineering, liaising with the relevant band engineers, while Kev Smith did the same in monitor world. Simon ‘Kas’ Kasprowicz was the stage technician while Kedge – showing his great aptitude for multi-tasking - also took on the role of Stage Manager.

Everyone was delighted with the results.

Jenny and Viva, commented, “Entec did a brilliant job as usual – over and above what was expected - to ensure it looked, sounded and felt really extra special”.

Entec Discovers the Pale ...n Ghosts with John Grant
Entec To The Power of Sev... at the Royal Albert Hall
Entec Lights Imelda May Tour