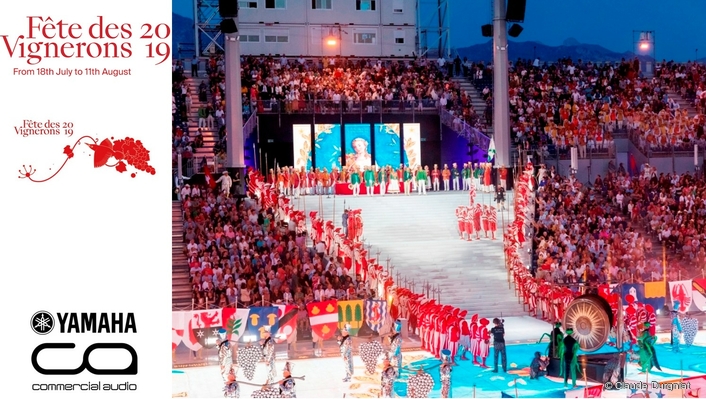 Around every 20 years, the ‘once in a generation’ Fête des Vignerons takes over the Swiss town of Vevey for a month in July and August. Featuring nearly 6400 performers, musicians and singers, 2000 lighting fixtures, 612 loudspeakers and over 300 channels of wireless microphones, 11 networked Yamaha digital mixing systems were needed for the centrepiece production of the 2019 event.

Fête des Vignerons is a spectacular event which pays homage to the centuries-old traditions of the Brotherhood of Winegrowers, which covers the area from Pully to Vevey, in the Lavaux region of Switzerland. The centrepiece production takes place in a temporary arena, built on the banks of Lac Léman (Lake Geneva) and depicts a year in the life of the vineyard over 20 scenes.

Taking place from 18th July to 11th August, this year’s production comprised 23 shows, plus the Coronation of the Vigneron-Tâcheron (wine-grower’s hand), traditionally regarded as the ‘keeper of the immemorial know-how’. It saw a quantum leap in the staging and production since it last took place in 1999, with today’s technology meaning the audio production could surpass the highest audience expectations. 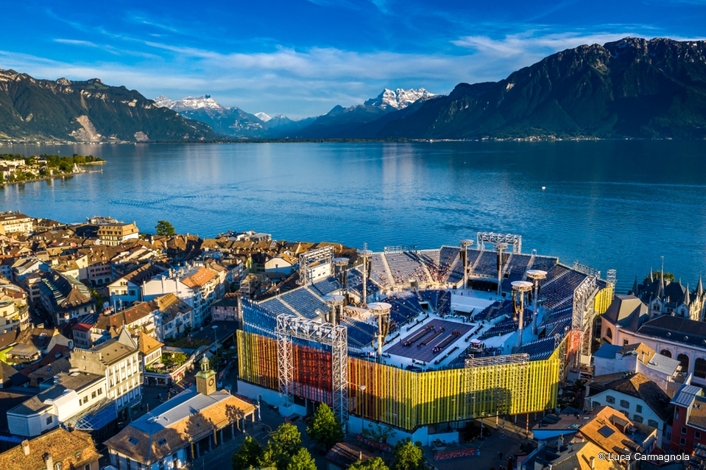 The show’s design was for five stages - one in the centre, plus one on each side of the arena - so sound coverage was a complex issue. For the 1999 event, the audio system was mounted on a single tower in the middle, meaning all of the sound came from one point. This year’s technical director François Mottier wanted to make sure that the mistakes from last time weren’t repeated, with artistic director Daniele Finzi Pasca also very keen to address the issue of sound localisation.

Martin Reich, head of Swiss company Audioconsulting AG, was in charge of the production’s audio concept and system design, working closely with Gregor Baumann. Digital networking meant that Martin could give each of the five stages its own PA system that would cover the whole arena. This was achieved with eight main PA towers, plus surround speakers and fills around the outside and the centre of the arena and subwoofers under the seating. “This was the best solution in a situation where any part of the PA could be 130 metres from the furthest audience point,” he says.

With a cast of 5500 actors, over 900 singers and musicians, plus a pre-recorded score by the Gstaad Festival Orchestra, Martin chose Yamaha digital mixing systems on twin Dante networks to handle the many audio channels, including 324 channels of Shure Axient digital wireless microphones.

“I realised that we would have to put everything in place once we were on site, because we wouldn’t necessarily have the information we needed up front. Dante would allow that, because it only needs a click of a mouse to change something quickly and reliably,” he says.

“The advantages of Yamaha RIVAGE PM series digital mixing systems were the sound quality, flexibility and the high channel count available on Dante - here we had 288 inputs on each system.  Another was that there is a high degree of integration between the two. And with these advantages also came great reliability. With Yamaha we knew exactly what we would get.”

Martin’s choice of three Yamaha RIVAGE PM10 and six PM7 digital mixing systems was a practical answer to dealing with over a thousand singers and musicians across five stages.

“We put a RIVAGE PM7 and two Rio3224-D2 I/O units on each stage, with a second PM7 on the main stage,” says Martin. “The sheer number of inputs meant that pre-mixing was essential to reduce the individual workloads, so I added two RIVAGE PM10s for mixing the choirs and a third PM10 for mixing the brass band. The premixed stems were then routed to the PM7s, where the engineers mixed them with the live signals from each stage.”

The networking was designed by Martin’s assistant and the event’s head of IP networks Gregor Baumann. He chose two parallel Dante networks - one for the live audio inputs to the RIVAGE PM systems and from them to the PA, the second for playback of backing tracks, live recording and virtual soundchecking - because it allowed the two Yamaha Nuage systems and the four 128-track recorders  to be used as a recording pool, which could be assigned dynamically per production day. 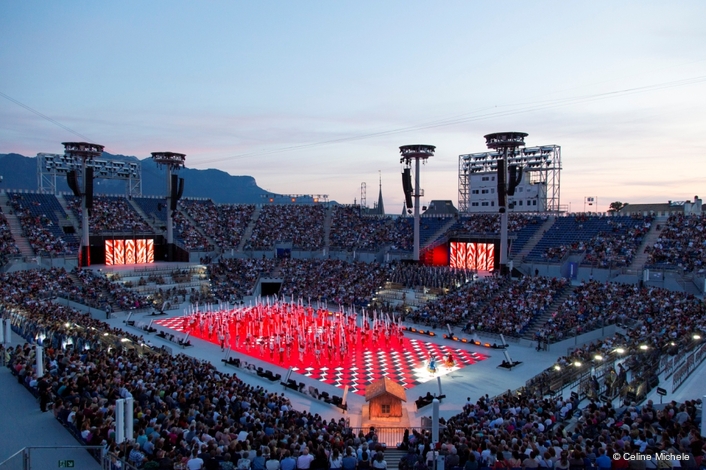 “Virtual soundchecking was a breeze and the RIVAGE PM systems saved us a lot of time,” says head of premixes Julian Fehlmann. “With hundreds of channels, having the copy and paste functions close at hand for any type of setting was a huge time-saver. I believe that’s a major point for being in the digital environment, yet is something that some brands don’t seem to have thought about too much.”

Nuage had been a core part of the production from the beginning, being used to record the orchestral score. “We pre-recorded the Gstaad Festival Orchestra, because we were not able to move it fast enough from one stage to another during the production,” smiles Martin. “We could have put it under the stage but we felt that, if you cannot see it, you might as well pre-record it.” 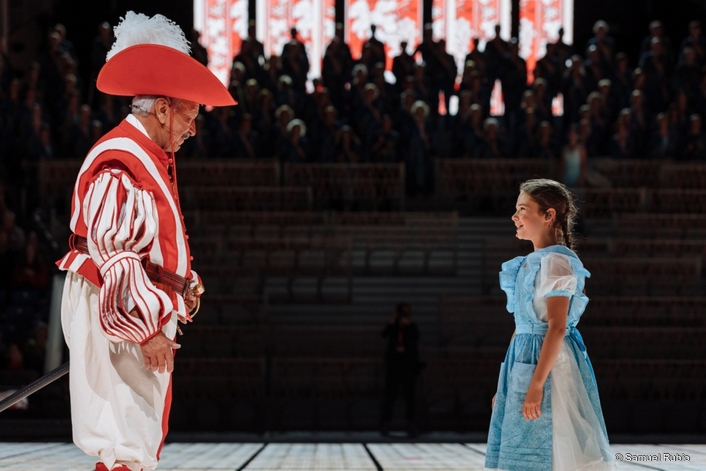 Used for the live playback of the orchestral score and sound effects, as well as recording and playing back rehearsals for the virtual soundchecks, another advantage of using Nuage was, like the RIVAGE PM systems, its close integration with Dante.

“Nuage and Nuendo really became the studio tools of the Fête,” says the head of SFX and virtual soundcheck David Weber. “The design of the audio system meant that we could use a lot of surround sound for effects. Also, as the show developed during rehearsals, timings changed and I was able to make some pieces of the music shorter or longer.” 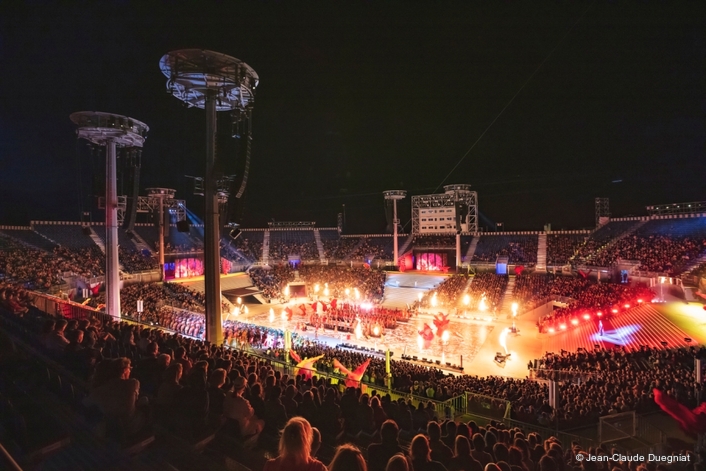 The Nuage system was also used to create alternative monitor mixes, where the dynamic sound of the orchestra was needed for playback, but for some of the performers’ in-ear monitors it was better to have a less dynamic mix.

The amount of wireless microphone channels meant that the entire bandwidth from 400 to 700mHz was needed, with the Axient receivers all connected via Yamaha Dante interface cards to Macintosh computers running Wavetools monitoring software. RF over fibre was also run to transmitters at various locations, some of which were over a kilometre away from the central monitoring location, allowing system checks via iPad.

By the end of July, three weeks into the month-long run of the 2019 Fête des Vignerons, when the Dante network and the Yamaha RIVAGE PM/Nuage systems had been running faultlessly (and continuously) for several weeks, Martin’s confidence in the audio system had already been well-rewarded.

“My main concern was about the network, but we used it 24/7 for all the sound, as well as all the communications, and we didn’t have a single hitch,” he says. “Gregor did an incredible job. It meant I was able to sleep at night!” 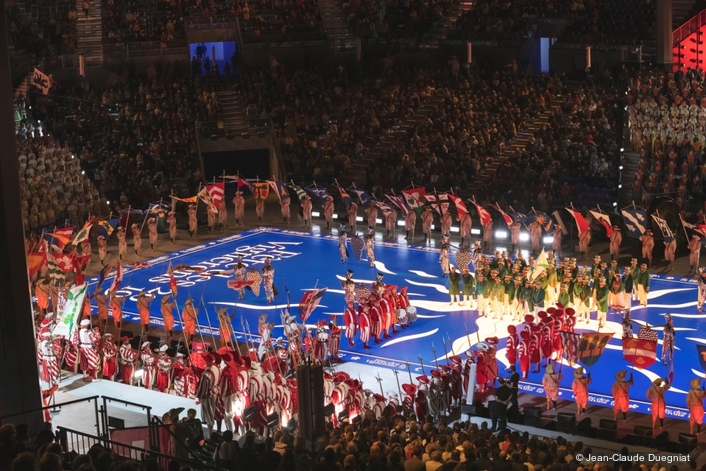