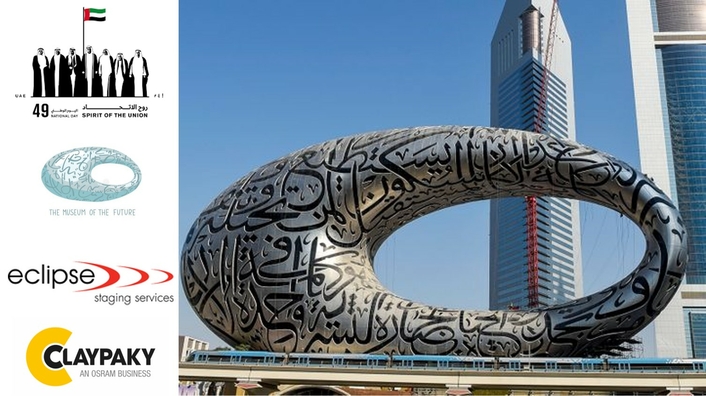 “Dubai is open for business” – a very clear message from the Government, as the UAE celebrated its 49th National Day in style. Eclipse Staging Services LLC were proud to support its long-term partner, People, with one of the most visually spectacular installations in recent years. Museum of the Future, a 255ft architectural masterpiece, set to open in 2021, was activated for the National Day celebrations with the temporary installation of 49 Clay Paky Mythos within its central void.

With design concept and event production from People, Eclipse crew worked alongside iRIG, the appointed rigging contractor, to hang the fixtures within a 360-degree, clockface design, from custom-rolled pipe dead hung to the building structure. As the site is currently still under construction, careful consideration and additional health and safety measures had to be implemented and followed to ensure that all crew could seamlessly work around the active site. 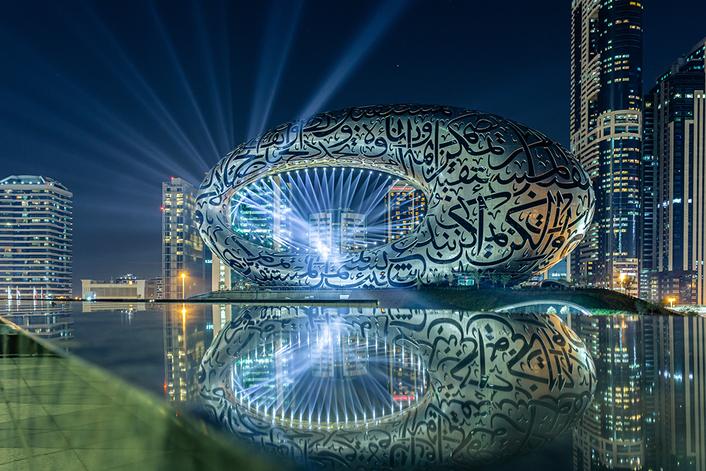 Lighting designer Tony (Turbo) Hall worked alongside the Eclipse programmer as the light show ran live for 6 nights. The design of the rig allowed for various key looks, ranging from tight beams all focused to the center of void, changing between the red, white and green colors of the UAE, to stunning aerial effects as the fixtures tiled out towards the nearby Emirates Towers.

Tony Hall says: “I was delighted to be able to use the ClayPaky Mythos 2 from eclipse for this project. The outstanding output from these fixtures created one horse race as far as fixture selection went. During programming, the enhanced output, even in saturated colours, proved a winning combination. The units proved to be extremely robust, with no failures on site. Given the issues with getting to any units, this was of paramount importance.”