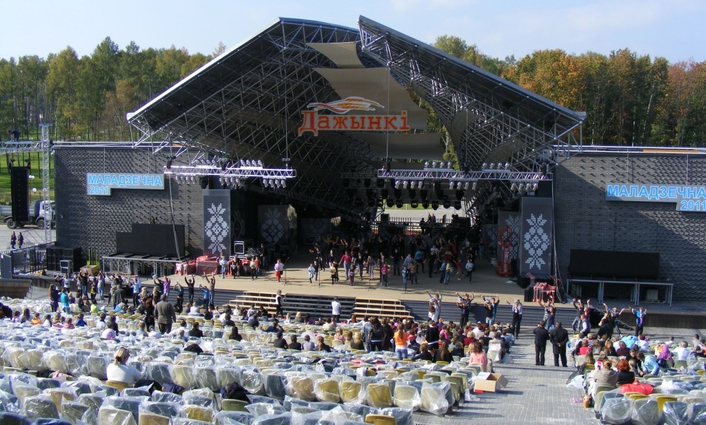 The amphitheatre was built specially for the festival, and EAW’s territorial distributors were brought in to reinforce the traditional festival of folk music, which was attended by nearly 3,000 people.

The opening ceremony was attended by well-known Belarusian bands and artistes, such as Anatoly Yarmolenko, (the Belarus representative at the 2011 Eurovision International Song Contest), Alena Lanskaya, (winner of the Grand Prix of the International Slavonic Bazaar Festival of Arts in Vitebsk) and Tatiana Lozovskaya, (soloist of folk music ensemble, Byaseda). The event was also attended by the President of Belarus, Alexander Lukashenko.

With a big relay screen located in the City’s central square for live streaming, MediaContract’s sound design specialist Pavel Sinilo designed his PA around hangs of eight KF760’s and two KF761 nearfield enclosures per side and nine SB1002 subwoofers per side. 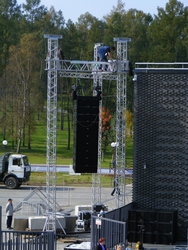 Four EAW MicroWedge MW12 (12-inch woofer and 3-inch compression driver provided the stage monitoring and the stage was further reinforced by four EAW MK5364 2-way, trapezoidal loudspeakers with SB600 2 x 15in subwoofer — and further SM12’s for performers at the back of the stage.

Managing (and optimizing) the main PA system were a pair of EAW UX8800 dedicated digital processors.

Said MediaContract general manager, Andrey Rybakov — whose company was also responsible for the lighting, “The 100 degrees of horizontal dispersion from the KF760 made the coverage angle perfect, providing even distribution across the entire site.

“Considering we had to contend with live TV transmission, and the fact that we ‘lost’ the first three rows, it made no significant impact to the nearfield. To provide absolute clarity for the President’s speech, without feedback, we moved the line arrays out of the stage area and placed them on the side towers.”

Operating the system at front of house was sound engineer Oleg Afanasiev from the Vitebsk amphitheatre who was hugely impressed with the quality and coverage of the sound. “In particular he noted the reserves of power in the system which made it possible to obtain a wide dynamic range for both the orchestral performance and the live band music,” Rybakov stressed.

About EAW
Founded in 1978 and celebrating over 30 years of excellence, Eastern Acoustic Works® (EAW®) is a global leader in producing high-performance professional audio equipment trusted by the most discerning professionals for every possible sound reinforcement application.