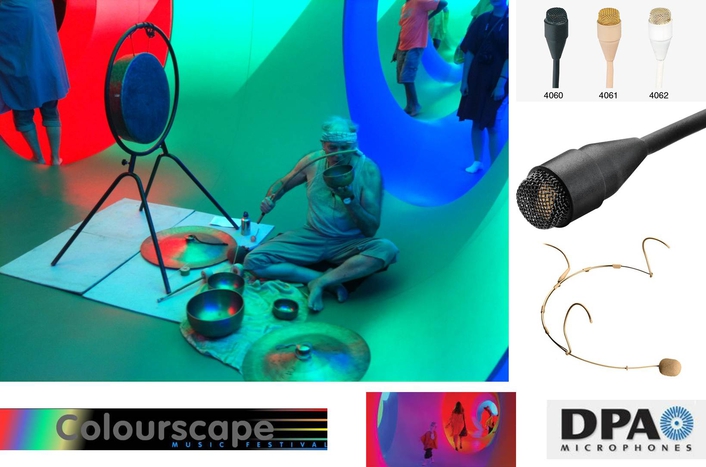 “I chose DPAs above all for their purity,” says Matt. “I’ve worked with the mics extensively in the past and I know they are extremely reliable and sound beautifully accurate. Their microdot connector system is very practical too, allowing me to use them with any of our motley assortment of radio mics. We try to use radio mics as much as possible for Colourscape, as cables mar the visual purity, not to mention the health and safety aspects of a performance space with total public access, and with DPA I know that I don't have to compromise quality for convenience.”

Staged by Eye Music Trust, Colourscape festivals combine music, colour, light, space and movement in a bid to bring contemporary music and arts to the widest possible public. The events take place in inflatable structures through which the public can wander, conceived and created by artists Peter Jones and Lynne Dickens. Festival One, the largest, comprising 98 four-metre wide chambers and a large performance space, was used for the Finnish and London festivals. Over the course of each festival a wide variety of musicians and ensembles performed.

Working with a selection of DPA 4060, 4061 and 4062 miniature omni mics and 4088 cardioid and 4066 omni headset mics, Saunders applied some ingenious solutions to the creative performances and wide range of new and traditional instruments. 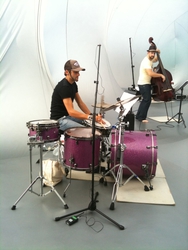 “I mounted four DPAs onto one flute to perform a piece written by composer Jonty Harrison, which is supposed to make you feel like you’re inside a giant flute,” recounts Saunders. “I used a 4088 cardioid headset mic for the mouthpiece, and then I constructed a wire gantry to suspend two 4061s above the keys, and put one 4062 in the open end of the flute. In this way, the audience are ‘moved’ up and down the flute as the air and key sound move along the instrument.”

Horns Aloud, a French Horn quartet formed at the Trinity College of Music, performed an afternoon-long set set, with Martin Mayes on French and Alphorn. “Each musician had a 4061 clipped inside the bells of the French horns and outside the bells of the Alphorns to compensate for their unfeasible volume,” says Saunders.

Other artists included Dr Jeff Higley, who wore a 4061 mounted on his shirt and sometimes on his bandanna, to pick up various percussion and ethnic instruments including Tibetan singing bowls, gongs, Chinese cymbals and harmonic flute.

The Threads Orchestra, performing music by themselves, other British composers and Frank Zappa, were miked with DPA 4061s as drum overheads on stands, and 4060s on all strings.

One of the more precarious applications was for flute player Simon Desorgher, suspended in the middle of a 30ft inflatable polythene sphere floating on the River Aura in Turku. “We mounted one 4061 on the index finger of the left hand to pick up key noise and a 4066 omni headset mic to pick up mouth noise. We clipped a couple of 4060s on his clothes to act as backups. There's no going back once he's sealed inside and on the water! 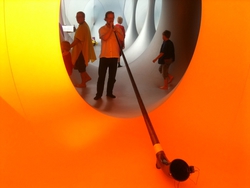 “Working on the Colourscape Festivals is always challenging fun,” concludes Saunders. “One day it might be crum horn and theorbo (a sort of bass lute), the next an ensemble of free improvisers and then a Balinese Gamelan. I find myself reaching for the DPAs first. They are accurate, dependable and handle outrageous volume levels. This, together with their size, gives me the freedom to be as creative as I need with placement. The microdot system is great, allowing me to use them on any radio mic system or a cable.

“The mics we use for Colourscape can get some pretty harsh treatment and the DPAs have never let me down. Be it on the end of a brutalised trombone, hung in a hung or in a 30 foot bubble on a river, they are unfailingly musical.”