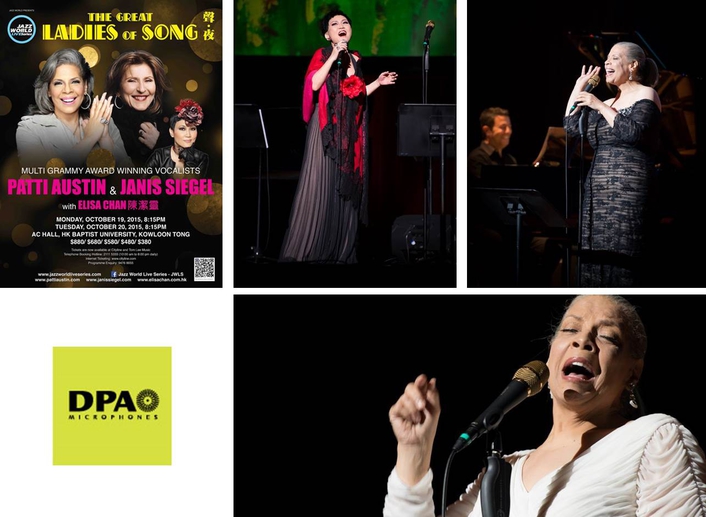 Patti Austin, Janis Siegel and Elisa Chan relied on the company's d:facto™Vocal Microphone for their recent concerts in Hong Kong.

The concerts, which were organised by promoter Clarence Chang as part of his Jazz World Live Series, took place at the Hong Kong Baptist University in Kowloon Tong. All three ladies were equipped with d:facto™ Vocal Microphones, which were specifically chosen because they deliver an extremely natural sound and high separation from nearby sound sources.

Sound designer and FOH mix engineer John Lin says: "DPA Microphones have become a staple part of Mr. Chang's Jazz World Live Series concerts because they are so reliable and of such high quality. We have used d:facto™ Vocal Microphone on a number of occasions because the high profile international artists we work with really appreciated the clarity these microphones bring to their vocal performances. In the case of Patti, Janis and Elisa, this was especially noticeable because their voices cover such a wide dynamic range. Having a vocal microphone of this calibre meant that we could deliver true studio sound quality on the live stage with barely any EQ adjustment."

"We make grids in a variety of finishes and for these concerts we fitted Patti Austin's d:facto™ with a gold coloured grid and used a nickel finish on Janis Siegel and Elisa Chan's microphones," Kimura says. "Obviously, changing the colour makes no difference to the sound quality, but it does bring a little extra theatre to the staging, which the ladies really appreciated."

"The concerts were an enormous success and the sound was crystal clear," John Lin adds. "All three ladies gave fantastic performances, particularly Patti Austin whose stage presence and voice were absolutely amazing and a perfect match for the d:facto Vocal Microphone. Using DPA for the Jazz World Live Series makes absolute sense because we can guarantee exceptional audio quality, and this in turn allows us to deliver a truly memorable experience for our audiences."

About DPA
At DPA Microphones we’re passionate about acoustic truth. That’s why every DPA microphone combines ingenious audio engineering with brilliant design and is crafted with more than 200 hands-on procedures at our own facilities in Denmark: to get as close as humanly possible to honest sound.