Rehearsals in Aix-en-Provence - DPA’s Michael Trolle mikes up a cast member
DPA’s new Reference Standard series of microphones have been used for a large outdoor event in Aix-en-Provence by French rental company Texen. Parade(s) was the opening concert for the Festival d’Aix-en-Provence, and featured the London Symphony Orchestra, the Estonian Philharmonic Chamber Choir and various soloists, performing Verdi’s La Traviata.

A selection of DPA’s new Reference Standard microphones, including the 2011A and 2011C twin diaphragm directional mics, was used for the concert. A total of 18 2011As and 2011Cs were used across orchestral instruments including violas, cellos, flutes, trombones, bassoons and marimbas. Four 4011As and 4011Cs were used for percussion and timpani, with 4011-TLs for 22 violins and a harp. For the choir, six 4098H hanging supercardioids were mounted directly on XLR adaptors on tall stands, pointing downwards, while five soloists were fitted with 4088-F directional headset mics. Additionally, 4015C compact wide directional mics were used in a DPA D3 Decca Tree mount suspended over the stage, with another three used for horns.

According to François Mondié at Texen, using DPA was a natural choice. “We’ve been working for a long time with Didier Rupin from DPA’s French distributor Audio2, to introduce DPA mics to our customers in the South of France,” says Mondié. “From the 4060 miniatures, through the 4088 headbands and through to the new 4099 clip mics, we offer them to our clients to raise the profile of the DPA range. 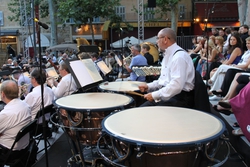 “During one of the first production meetings for this event back in March, I immediately realised that Texen would need some help, so I called to Didier from Audio2. He understood our needs, and drew up a partnership agreement to work together on the concert.

“We faced the enormous task of updating the mic list given to us by the engineer Bernard De Almeida, as well as staff from the LSO staff, exchanging their entire mic list with the new DPA range. 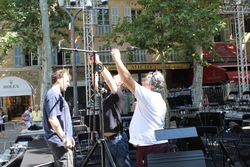 Thomas Goeuriot, who was babysitting Bernard De Almeida at the concert, is also a longtime fan of DPA microphones, but this was the first time he had worked with the new mic series. “The Reference Standard series is for me unbeatable, with its elegant design, and an improved result over the DPA microphones I already knew,” he says. “My preference is towards the 4011s, with their very precise and neutral vocal tones. The 4015 capsules give a ‘wide cardioid’ directivity, which was very interesting with the horns and gave us an overall sense of unity from the suspended Decca tree as well.