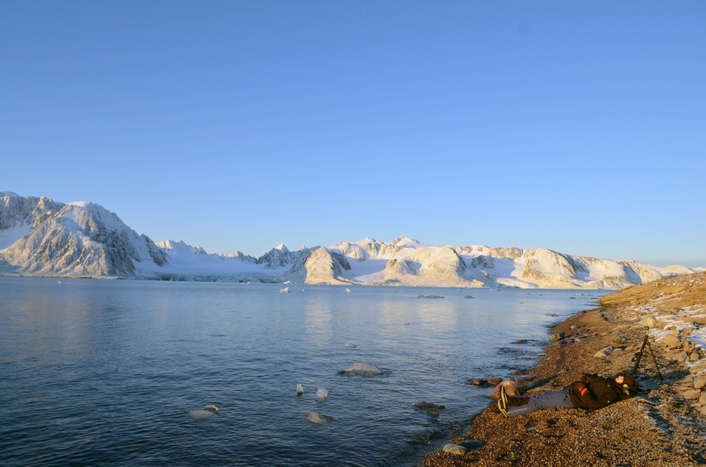 Blinkhorn travelled to the region on a traditionally rigged tall ship, working on creative field recordings for sound installations and electroacoustic compositions as well as a feature for ABC radio’s 360 program and his own research into composing with environmental sound.

“It’s an area renowned for its visual and cinematic beauty, and sound plays an integral role in the uniqueness of its appeal,” says Blinkhorn. “There’s a great deal of sonic activity within the archipelago, both animal - aquatic and birdlife: walrus, arctic fox, deer, polar bears etc - and aqueous: ice sheets calving from glaciers, icebergs colliding, pancake and brash ice melting - as well as plenty of driving wind and snow.

“In this type of location, it’s paramount that the sound equipment is highly portable and easy to handle, is highly reliable and acoustically accurate and won’t malfunction within extreme temperatures. There were a number of obstacles encountered during the expedition, including extremities in wind, rough seas and lots of moisture, but the most salient characteristic was definitely temperature.

As well as recording on land around melting icebergs and glaciers, Blinkhorn also carried recorded on the ship using the 2006As. “Whilst the region can be excessively noisy due to wind and water, inversely it can be incredibly quiet, and I was taken with how well the 2006As reflected the true nature of the extremes,” he says. “Driving wind, often at up to 80 km/h, and smashing ice was captured perfectly; with a decent wind jammer of course! The complete absence of human activity meant often near zero noise within the environment, which the 2006As captured so completely, ensuring the smallest sounds within the silence became highly articulate and acoustically authentic.”

Blinkhorn was mainly using the 2006As in an AB stereo configuration. “The accuracy of the 2006As working in concert with one another ensured a beautifully homogenous and balanced stereo image, with a consistency that ensured striking resolution throughout all the recordings,” he says. “I also used the microphones in an individual, omnidirectional configuration and was once again highly impressed with their accuracy and depth, where they seem to provide such an expansive and detailed spectral window, regardless of the subject matter. In short, thanks to DPA’s remarkable design and overall attention to detail, I found the 2006As impossible to fault, providing a truly inspired recording experience.”

A selection of recordings from the expedition are available through Creative Commons Licensing for listening and use, and can be previewed here. The expedition was made possible through the assistance of the Winston Churchill Trust and the Ian Potter Cultural Trust.