Italy: the Arena in Verona filled with people, 5.5 million viewers in front of Rai television and even more tuned on national radios for the celebration of the 10th anniversary of Pavarotti’s departure from this world. As the media described in more than one occasion, both the man, Luciano, and the artist, Pavarotti, have left a deep mark in our world which will last forever.

Many of the artists who played with him during the numerous editions of “Pavarotti & Friends” wanted to be on stage for this occasion to sing once again along with the “Maestro”: a total of 226 channels of mic and line signals coming from the band, the orchestra, the choir, the solo singers and the announcers with 24 additional playback tracks playing “live” the recorded voice of Pavarotti.

Agorà, the Italian production company which supported the event, chose two pairs of DiGiCo SD7 for mixing both in front of house and on stage: both pairs were composed by a first console dedicated to the orchestra and a second one for the band and the solos. Two more DiGiCo SD11 were added in both locations to manage the mics of the announcers and special guests. Two SSL L500 consoles used in sharing mode were chosen to handle the mix for the broadcast feeds reaching the Rai OB Van and the national radios.

Daniele Tramontani and Stevan Martinovic, chief engineers at Agorà, designed the signal distribution system along with the support and suggestions received by Luca Giaroli from DirectOut.

Two different solutions were chosen to enhance redundancy for the signal distribution. A full analog transportation was provided through 4 DiGiCo SD Racks and 8 SSL ML32. A second full Madi solution was adopted by using the DiGiCo optical loop to feed the SD7 consoles and two DirectOut M.1K2 madi routers in “doppelgaenger” (mirror) mode which were collecting the signals from the coaxial Madi outputs of the SD Racks and were providing them to the SD11 consoles and to the two multitrack recording stations. 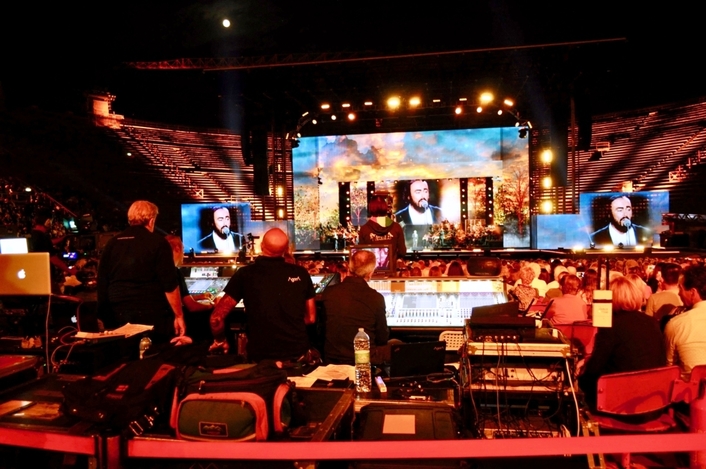 The 1024x1024 channels DirectOut M.1K2 routers were also collecting the signals coming from the playback rig and were distributing them to both the SD7 consoles and the multitrack recording stations.

The playback rig was composed by a pair of MacBook Pros, one master and one slave, connected to the Madi loop via two RME sound-cards. In order to improve the redundancy level of the playback system and to ensure automatic and inaudible switchover between the sources in case of one failing, Daniele and his team chose to rely upon two DirectOut EXBOX.BLDS.

The outputs of the two EXBOX.BLDS were then connected to two DirectOut SPLIT.CONVERTERs which were used to distribute the playback tracks to the M.1K2 routers to reach the “live” environment and the “broadcast” one. Since the broadcast world was running on its own clock domain, a couple of DirectOut MADI.SRC have been deployed to re-synchronize the two MADI streams.

“Several DirectOut devices have been chosen for this live/broadcast event to ease the collection and distribution of lots of signals and increase the overall level of redundancy. And this makes us very proud” says Luca Giaroli, “It was a pleasure to support Daniele and the Agorà team, long-time happy users of our products, and the success of the event proves once more the quality, reliability and flexibility of our devices, which can really adapt to any kind of situation, being it a live show, a broadcasted event or a fixed installation.”

DirectOut GmbH was founded in 2008 by a team of professional sound engineers headed up by Stephan Flock. The company specializes in developing essential pro audio connectivity, networking and bridging solutions for broadcast, studio, live and installed sound applications. Unique in that all members of the DirectOut development team are still active professional sound engineers, the company is thus fully focused on real-world demands and problem solving. The product range, marketed under the brand of DirectOut Technologies®, offers solutions that build bridges between different audio worlds and make systems and formats more flexible. Audio formats supported include MADI, SoundGrid, Dante, RAVENNA and the standards AES67 and SMPTE ST2110-30. Headquartered in Mittweida, Germany, DirectOut products are distributed worldwide.

An endless emotions for Pavarotti on YouTube
AgorA
DirectOut