The garrison town of Leopoldsburg in Belgium was a perfect setting for the large scale promenade theatrical spectacle ‘De Groote Rappel’, directed by Luc Stevens and featuring a large community cast from the city telling the story of two world wars, with the final act played out in a quadrangle in front of a prominent army barracks.

Lighting was designed by Michel Jacobs, a freelance LD with a track record of lighting more unusual or offbeat performances and a penchant for less commercial sectors, and Timothy Haesevoets from Leopoldsburg City Theatre.

The two agreed that Robe moving lights – specifically BMFL Blades and DL4Ss were the way forward to light this challenging scenario.

While site-specific work is simultaneously exciting and galvanising, it requires plenty of thinking ‘out-of-the-box’! The sprawling quadrangle in front of the barracks building was surfaced in tarmac which absorbed lumens alarmingly. Then they had a 13.5 metre wide playing area and a lot of people to cover … so a big powerful lightsource was required. 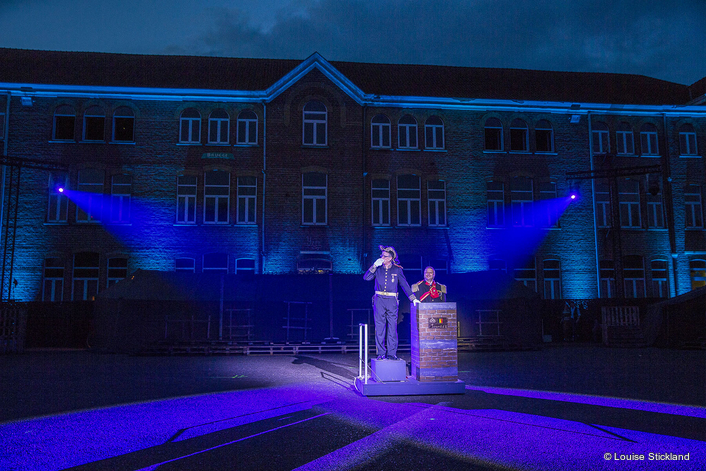 There was only one fixture to do it – Robe’s BMFL Blade!
Of 14 x BMFL Blades, eight were positioned along the front of the grandstand seating, with  six at the back … up on the third floor of the building pointing out and down through the windows from which the glass was removed. They were rigged 3 a side on short trusses on stands.

The front BMFL Blades were used to cover the building with crisp gobos and rich saturated colours – their intensity had great impact even on the red brick building - another notoriously difficult surface for any type of projection to register.

Even the dull black tarmac and its bumpy topography came alive with BMFL Blade gobos etching the surface, and the fixtures were also highly effectively used as searchlights, thrusting beams into the pitch black night sky for the air raid sections of the action.

“We needed a high output fixture with shutters, and right now, there’s nothing better than the BMFL Blade,” stated Michel who had first used them in a black box theatre show earlier in the year.

The 12 x DL4Ss were also picked as a versatile, bright, feature-packed LED profile fixture that is designed for theatrical environments and rigged on six T-towers dotted around the rear of the performance space which meant they could light in either direction – backwards or forwards – as well as illuminating the trees bordering the performance space. This saved on additional foliage wash lights.

The DL4Ss were purchased especially for the show by rental company Demon and delivered via Robe’s Benelux distributor Controllux in time for De Groote Rappel. 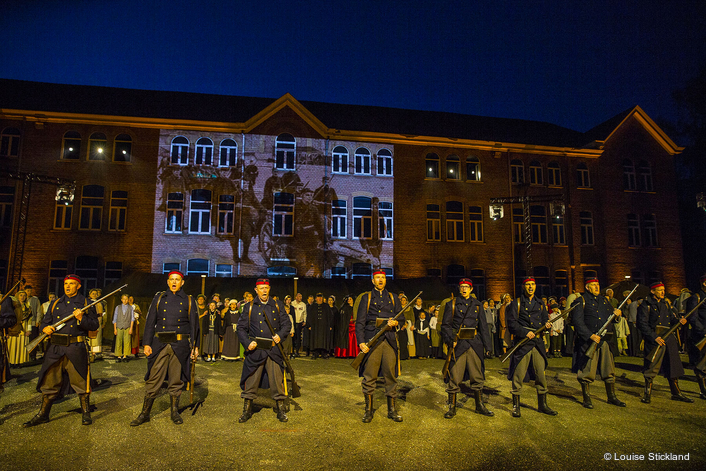 Timothy and Michel also wanted to maximise the use of LED where possible, and most of the other lighting kit utilized in the show was LED based. Running on generator power, all current savings helped.

Crafting an ambience for the piece was also about over-layering different textures of light which was often a very subtle process.

Michel and Timothy had seen DL4Ss in action on other shows and thought they would be perfect near-field profiles complimenting the BMFL Blades.

The DL4Ss produced smooth, even back washes and general illumination, side lighting and secondary gobo layering. The CTO white in these and the BMFL Blades was useful to bring a period feel to certain scenes and capture the tungsten ambience that the director really wanted. 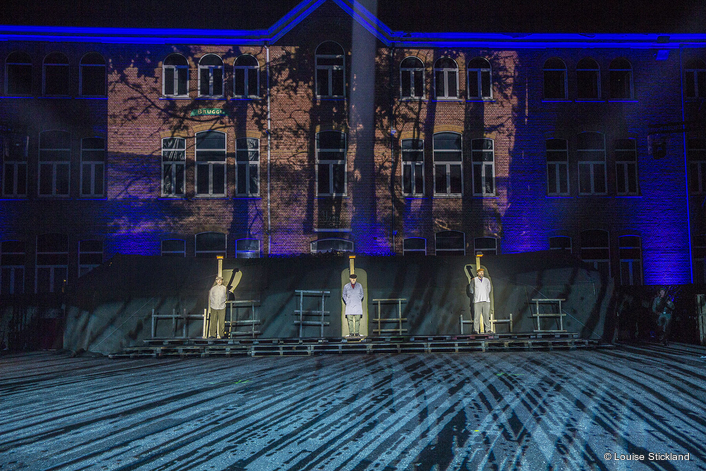 Four Robe Pointes were rigged to the grandstand for front key lighting, sometimes used with their frost filters for covering wider distances and chorus scenes with clean, well-defined light.

All the kit was left in place for the three week duration in which the performances took place, They were fitted with rain covers but it was also essential that they used a brand with a reputation for toughness and durability, so again Robe products scored ... and dealt admirably with some unseasonal weather, plenty of spring showers and cold winds!

Operating lights for the show was Kenan Akus using a ChamSys MQ100 with two fader wings, and Kristof van Broekhoven looked after the sound.

Timothy in his role of technical production manager, was also charged with co-ordinating the event’s other technical departments including audio, projection and staging, and worked alongside a crew of three from the City Theatre. They were joined by two lighting technicians from rental company Demon which supplied the sound system and projection equipment as well. 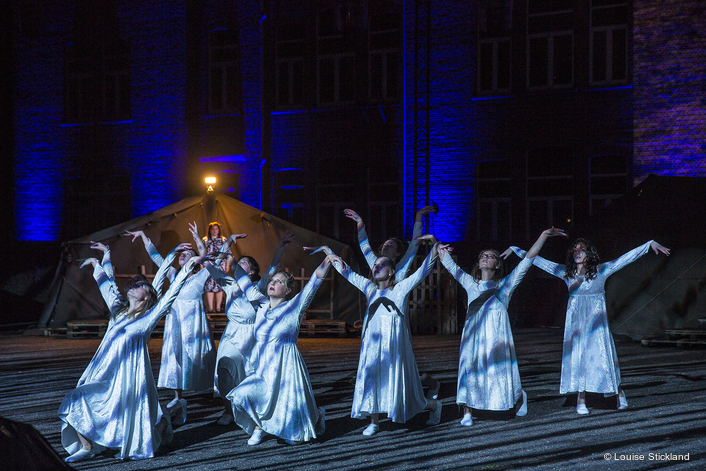 Michel has worked with the director Luc Stevens on several other projects including large scale musical spectacles, and this one appealed to his love of the unorthodox. In addition to the lighting design, he evolved the stripped back ‘makeshift’ set which utilised bits of functional equipment like tents and sand bags that the army had readily available, adding to the atmosphere and transient timeline of the narrative.

The Groote Rappel shows exuded freshness and vitality from a highly skilled production team and an enthusiastic cast. Lighting – for a small amount of fixtures and imposingly large area to cover - embraced all the emotions. It was dramatic, stark, playful and fun, moving the action along and flipping between multiple locations and making the whole experience intimate and personal for the audience to enjoy.