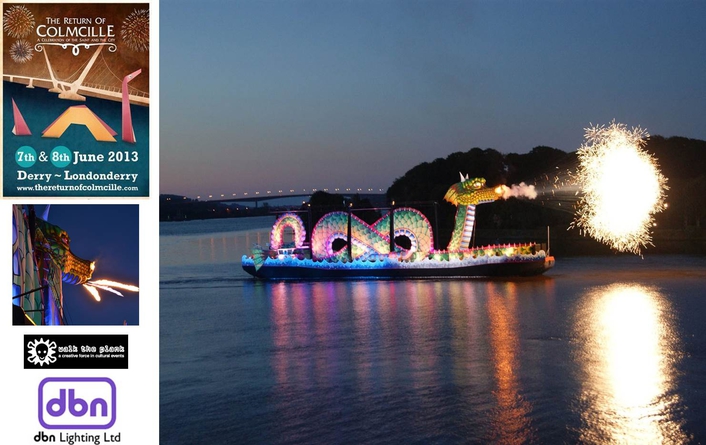 .
Manchester based dbn Lighting helped to bring an ancient legend to life for a landmark event in the UK’s first ever City of Culture, Derry~Londonderry. dbn designed and supplied rigging and lighting for a breath-taking recreation of the famed Loch Ness Monster – which played a starring role in the Showdown on the Foyle finale to the weekend-long celebrations entitled ‘The Return of Colmcille’.

Showdown on the Foyle was a specially commissioned public performance written by Frank Cottrell Boyce, created by Walk The Plank and played out over 30 hours on the streets of the UK’s City of Culture. Artist Francis Morgan’s water bound Loch Ness monster ensured a gripping finale for the tens of thousands of spectators gathered along the banks of the Foyle River, with dbn’s lighting bringing the beast to life in spectacular fashion.

The showdown saw Colmcille, a key figure in Derry’s history and old enemy of Nessie, lead his townsfolk in a thrilling confrontation with the 70-metre long, 18-metre high, technicolour beast - all set against the backdrop of Derry~Londonderry’s famous Peace Bridge, which physically and symbolically unites both sides of the River Foyle.

dbn’s brief was twofold - to design and build a rigging structure aboard ‘The Argus’, a 70 metre long sand dredger made available to the production by the Port Authority, on which the Monster could be built and operated; and to light both the Monster itself and the rest of the performance across the vast site.

The boat carrying Nessie travelled up the river, towards the Peace Bridge where it was met by Colmcille who vanquished the beast in a remarkable scene replete with drama, spectacle, pyro, special effects and fireworks.

dbn’s Nick Todd project managed and co-ordinated all the Monster’s rigging requirements, while Stephen Page designed lighting for this plus two other areas – Queens Quay, an 800 metre stretch of riverbank which was the main viewing area, and the Peace Bridge itself.

Monster Rigging
Nick Todd’s support structure for the Monster was based on a five legged ground support system made from Slick trussing. He worked closely with Francis Morgan - who designed and constructed the Monster - alongside Ian Hall and Malcolm Richards from Total Solutions on the engineering and structural calculations.

The Monster was constructed in two parts:
A 12 metre long solid head, which was mounted on a tele-handler installed in the hold of the boat, which could raise it up by 20 metres – and the body, which filled the full length of the dredger and was made up of painted canvasses.

The body was supported by a 5-legged, 15 metre high black trussing structure, complete with a winch system with steels wound on to rollers at the bottom of each trussing leg, enabling the canvasses to rise and fall in sync.

Design challenges included ensuring that the structure was able to withstand wind that would get under the cloths as the boat moved along the river.

Reinforced trussing foundations were built in the bottom of the hull below deck level to give the requisite strength and stability.

The five masts were all joined together by a spine truss running along the top of the legs, which also carried the winch sets and pulleys for moving the cloths up and down. They were guy wired to 10 tonne deck-eyes welded on to the boat. Customisation of the boat was allowed in order to ensure that the installation was safe.

Rollers built in to the cloths maintained the tension and were attached to the winch bars by steel wires and moved by seven half tonne Lodestar motors and 40 pulleys.

Using the same mechanism, at the end of the show, three giant swans’ heads were raised from the ashes of the slain Loch Ness Monster.

Nick Todd said: “The scale of the job was colossal and that was the main challenge”. It was the first time that Todd has rigged anything like this and also the first time he’s installed a trussing system on a boat!

He continues: “It was hugely exciting and physically and mentally gruelling, but we all enjoyed it immensely. It was fantastic to be involved in such an exceptional project”.

Lighting
Stephen Page drew WYSIWYG models of the Monster’s lighting rig beforehand and maintained enough flexibility in his scheme to be able to make final adjustments and fixture placements once they were actually on site and the Monster was installed. Approaching it any other way would have been impossible.

Fixtures included SGM Palco 3 LED floods, Atomic Colours and 12 of dbn’s brand new Clay Paky Sharpy Washes, which arrived just in time for the event. These were all placed where they could be fitted around the boat, which had a generator on board to supply power.

In particular, two Sharpy Washes in custom dbn domes were used to backlight the Monster’s eyes which worked really well to give the definition and variation required to help convey its emotions throughout the performance.

A Jands Vista S1 programmed by Pete Isherwood under Page’s supervision was utilised to run all Nessie’s lights, triggered by timecode broadcast site-wide from the audio track. 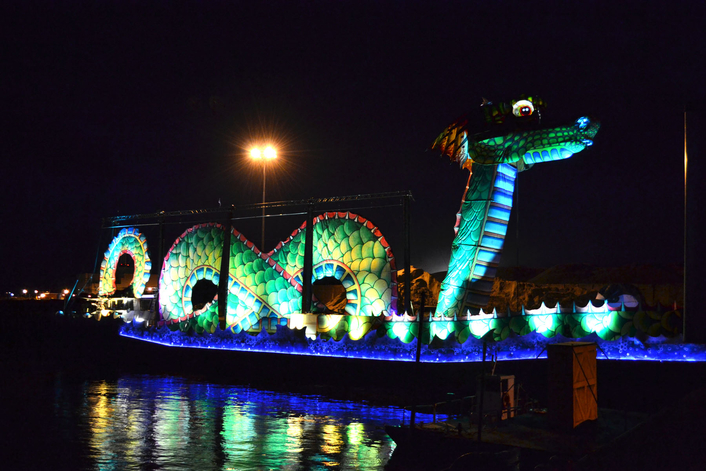 On the quayside, a row of 24 Clay Paky Alpha Beam 700s positioned right on the edges of the water skimmed the area and shot powerful beams up into the night sky, all controlled by Page from a Jands Vista S3 console.

The Peace Bridge was illuminated with 48 x CP Sharpies attached to special brackets designed by dbn to conceal    them under the bridge as discreetly as possible. Their careful positioning also gave a degree of weather protection. The lighting effect accentuated the steely elegance of the Bridge bringing a final touch of magic to the environment as the tale unfolded to the delight of the throngs of onlookers.

Page said, “It was an incredible one-off event that really brought new meaning to the word ‘special’. It stretched the imaginations and technical skills of all those working on the show, and as we all became completely immersed in the action, some incredible teamwork produced amazing results”.

The show engaged audiences of over 33,000 who flocked to Derry-Londonderry for the weekend to catch the drama and fun unfold into a truly memorable experience.