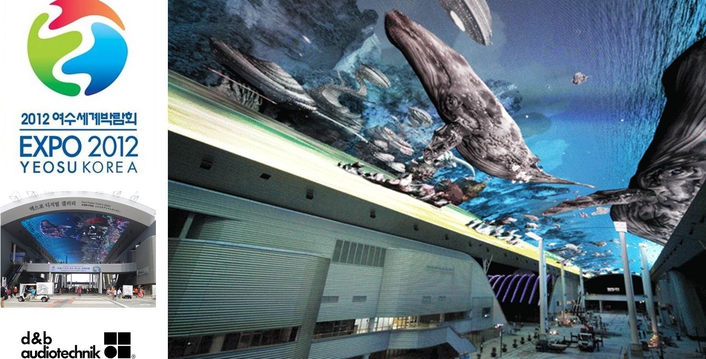 .
A pavilion of cathedral like proportions; a vast ceiling of moving colour and imagery; the deep blues and greens of the deep ocean, so real you can almost feel them wash over you; the majestic progress of the noblest creatures of the sea swimming high above you. What's the missing element?

It has to be sound; the echoing, womb like sound of whale song enveloping the visitor, drawing their eyes up to absorb the vision high above them and so to complete the experience. And not just any sound; sound designers Charles de Meaux, Content Artist and Thierry Coduys, technical 3D sound implementation wanted to create a seamless 3D sonic feeling throughout the Expo Digital Gallery Pavilion at the 2012 World Expo located at Yeosu, South Korea. Its theme of The Living Ocean and Coast was reflected both in its natural setting and its technically ambitious pavilions spread over a vast two hundred and fifty square metre site. Any audio installation here would have to be ambitious, creative and innovative to successfully compete with the dexterous technology on display here. They turned to Xavier Cousyn at d&b audiotechnik in France.

The Digital Gallery, all two hundred and eighteen by thirty metres of it, houses one of the biggest video screens in the world to present virtual and digital arts in large format. Running along the entire arched ceiling the images presents visitors with panoramic experiences from world famous beaches and other oceanic delights: floating icebergs; sea birds flying over and through the hallway; waves and whales moving rhythmically across the vista. Rather than simply aim for a 5.1 or 7.1 surround sound solution, de Meaux and Coduys wanted to create a 3D spherical sound field in the centre of the pavilion so Cousyn's design objective was centred on achieving a holophonic PA system using an ambisonics algorithm.

Tim Frühwirth, from Education and Application Support at the d&b audiotechnik headquarters in Backnang, Germany elaborates on the technicalities, "The big difference between a holophonic PA system when compared to a normal 5.1 surround system, where you have to place both the loudspeakers and the listeners in a given predefined setup, is the general independency of sources and loudspeakers; the accurate imaging for the listener would only be experienced at the central position or sweet-spot. Using this standard technology in a pavilion like the EDG where listeners are frequently passing by, the artists' expectations and the d&b philosophy of 'democracy for all listeners' wouldn't be achieved at all. Following the ambisonics principle, the source will be placed inside the virtual sound system emulation. The controller system knows the location and orientation of every loudspeaker within the installed system so creates and routes the calculated signal via multiple channels to the respective loudspeakers. This allows the individual visitor in the listening area to localise the generated sound source independently of his or her actual position. This achieves an accurate imaging of both the visible and audible content independent of the listener's position, which meets exactly the requirements for this project." 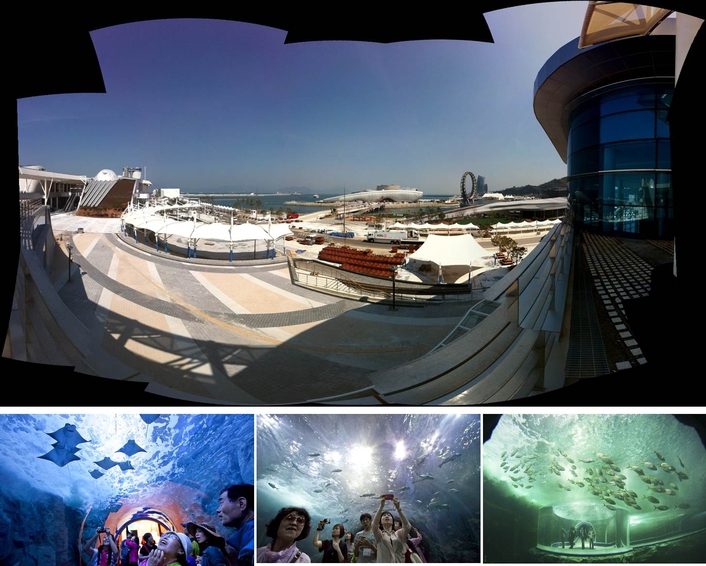 Back at d&b audiotechnik in Backnang, a system of E12-D loudspeakers, picked for their wide horizontal dispersion of 110 degrees that was most appropriate for an ambisonic or holophonic audio solution alongside supporting Qi-SUBS were painted up in the Special Colour (SC) option of light grey to blend into the background. Together with the relevant D12 amplifiers, the loudspeakers were shipped to d&b South Korea in Seoul. Although the system was designed in France and shipped from Germany, it was Seong-Jong Choi and Sun-Jung Kim from d&b in South Korea who installed and tuned the system with support from Frühwirth, this was a truly international effort.

The loudspeaker system was hung using eight pillars distributed in an elliptical shape around the area of the EDG Pavilion with a diagonal diameter of nearly sixty metres from the first to last pillar. Each pillar was rigged with E12-D loudspeakers mounted on three different vertical levels between four and fifteen metres in height and with one Qi-SUB which was mounted between the first and the second level. Each cabinet was driven by an individual D12 amplifier channel so that the positioning tool chosen by the original designers Coduys and de Meaux, the 'IANNIX' Software, could create a spatial sound field. 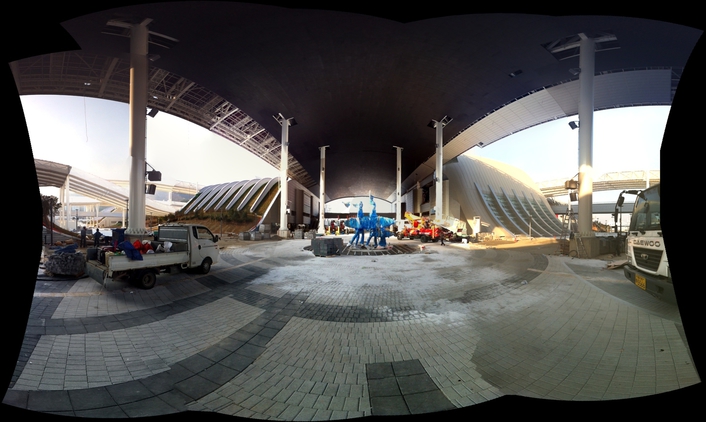 The International Exposition Yeosu Korea 2012 opened for visitors on May 12th and ran for ninety three days attracting between one to two hundred thousand visitors a day. The Dreaming Whale sequence at the Expo Digital Gallery invited visitors to participate in an interactive program and upload their own images onto the screen. Over one million pictures were sent in by over three million visitors to the EDG.  When Frühwirth remarks that, with this d&b audiotechnik installation, "Every listener gets to hear the whole picture; that sweet-spot is expanded to include any number of visitors," one wonders if he had counted up to three million.

A Historical Sound: d&b a... Historic Zhongshan Hall
Tales from the Bridge
The Beautiful Sound of the Belle Époque