Coordinating the different activities that took place over the Diamond Jubilee weekend, including a concert featuring more than 30 performers, a flotilla on the Thames River and a royal procession from Westminster Abbey to Buckingham Palace, was a massive undertaking. It required precise coordination and organization on the part of event organizers and production teams, which is why Delta Sound installed a 112-port Clear-Com Eclipse Median with several V-Series panels in the Jubilee’s event control room. The system, which features eight built-in interface module slots for easy interfacing with third-party systems, allowed event workers on walkie-talkies to communicate with workers on the V-Series panels in the control room, adding greater efficiency to the overall production.

Delta Sound deployed another Clear-Com Eclipse Median, along with a large number of V-Series control panels, for the Diamond Jubilee concert, which took place in front of Buckingham Palace. For the concert, Delta set up V-Series panels in the center of the traffic circle in front of the palace, on its roof and in its back garden. This allowed the sound, lighting, video and stage-management teams working the concert to coordinate their efforts. A highlight of the concert was a set by the ska band Madness where stunning, giant visuals of past English kings and queens, as well as images of typical British-style row houses, were imposed on the palace. Workers used the V-Series panels to ensure the visuals were projected as the band played its hit “Our House.” A third Eclipse Median, along with a dozen V-Series panels, were used by security operations during the Royal Family’s procession from Westminster Abbey to Buckingham Palace.

“We found the Clear-Com system to be very straightforward to use, which is important when it comes to coordinating an event of this size,” says Phil Kidd, Delta Sound’s Project and Comms Manager. “The Eclipse Median systems and V-Series panels were easy to set up and we didn’t have to spend much time training people to use them. We also liked the ease of interfacing with other communications systems, such as the walkie-talkies used along the route of the royal procession. Overall, the systems worked very well for us.” 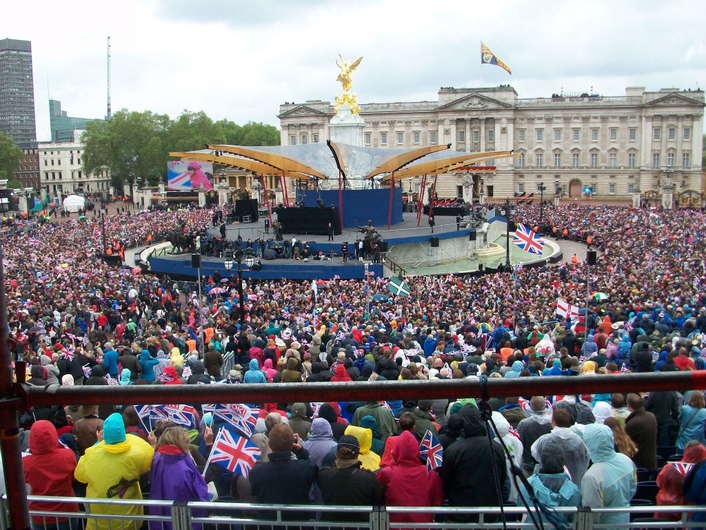 Clear-Com’s Eclipse family of digital matrix intercoms provide a flexible and scalable foundation for point-to-point and group-based multi-connections, supporting up to as many as 3120 user connections on a networked system platform. The Eclipse Median, which comes in a 6-RU frame that houses two CPU and eight matrix slots, with eight built-in interface module slots, is uniquely designed for mobile flight-case systems or any production environment where rack space is limited.