.
Riyadh-based Rhythm Media Production organized two shows in the Taif theatre tent, the first for the Souq Okaz cultural festival and the second for Saudi Arabia's National Day in the presence of his Highness Prince Mishaal bin Majid Al Saud, Governor of Jeddah.

The well-known Saudi director Futais Bugna, owner of the production company and curator of various events for the Saudi royal house, set up two huge shows.

The first was a drama based on the story of the pre-Islamic poet Ilashia, who - like many others - went to Okaz to find inspiration, spending nights in the desert in the company of wine and women. The story tells of how this man became famous for his poems, but also of how he came to a bad end for not embracing the Islamic religion.
The production involved fifty actors, together with camels and horses, on a stage with a fifty-metre proscenium.

The director asked the Italian lighting designer Emiliano Morgia for his creative contribution, which he provided with extensive use of Clay Paky lights.

"There were limitations to the design," said Emiliano Morgia, "because it was impossible to hang any kind of backlighting truss on the structure. I was however able to make extensive use of Alpha Profile 1500s for the frontlighting, plus 24 Sharpys, which I was able to place on the huge tent props thanks to their light weight".

"The Alpha Profile 1500s are incomparably accurate, with an optical sharpness like no other light on the market. I also used several Alpha Spot HPE 700s to illuminate the scenery."

The set was designed by Abdullah Siddique, a naturalized Saudi designer of Pakistani origin.

The show was broadcast live by the national television channel Saudi 1, and was followed by over 20,000,000 viewers: a unique record for this type of event. 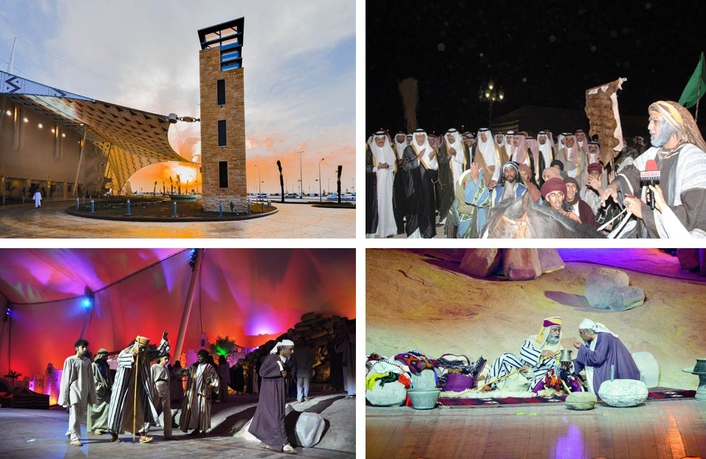 "I am always happy to work with Futais. He is a great director and a person of great humanity. I was put in a position to interpret the whole drama, even without understanding a word of Arabic. However, when a story is well written and performed in such an intense way, you do not need words to understand the meaning."

The lighting system was managed and programmed by associate lighting designer Nick Calthrop, who used two Hog4s connected in a network. He pre-programmed the whole show with the use of WYSIWYG.

Four days after the first big event, a stage was set up on the same site to celebrate the National Day using the same lighting material and an additional twelve 25,000 ANSI lumen video projectors.

Emanuele Morgia concluded: "By using Clay Paky, I am always able to deliver my clients a quality product, no matter where I am, in Italy, Asia or the Middle East. Clay Paky's quality helps me provide a top-ranking product and the clients are always satisfied with what I do. The saturated colours of Clay Paky lights are unmistakable and often even laypeople are fascinated by the Sharpys' unique beauty. My thanks go to Pasquale Quadri, Chairman of Clay Paky, whose work has taken Italian products around the world keeping the level of our image high."