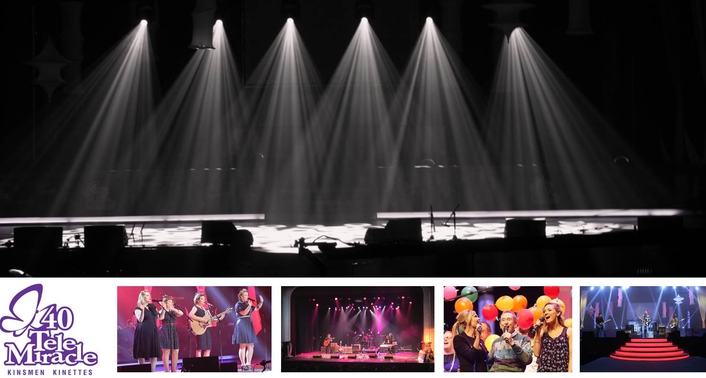 The Kinsmen Foundation is a Canadian non-profit organization that assists Saskatchewan people to acquire special needs equipment and access to medical treatment.    The telethon was staged at Conexus Arts Centre in Regina, Saskatchewan; the production alternates between Regina and Saskatoon annually.

Linus MacDonald marked his fifth consecutive turn as lighting designer for Telemiracle, which continues to increase its production values year to year.  “This time we had new Sony cameras and the fabulous Scenius fixtures,” he notes.  “The show has taken giant steps from a lighting standpoint.  You need good lighting to make good pictures; now, viewers tune in and the show jumps out at them.”

“Every 10 minutes there was a live performance, so we needed a lot of different looks,” says lighting director Slobodan Marin who has teamed with MacDonald on three previous telethons.  “We rehearsed the first hour of the show then everything else was on the fly.  It was non-stop from one performance to another.”

MacDonald first saw Scenius when Andrew Beck, general manager of A.C.T Lighting Canada, demo’d the new lights in Calgary.  “Andrew and I go way back,” he says.  “I asked about the availability of Scenius fixtures for our big 40th anniversary show.  And we’ve just been blown away by them!”

MacDonald and Marin centered the six Scenius spots over the mid-stage area on the fly rail where they were rigged to move to different heights and angles.  “For some rock ’n roll bands we flew the lights half-way so they’d be down and in- your-face for another kind of look,” MacDonald explains.

The telethon opened with the set dimmed down and only Scenius illuminated, its beams “very defined against the camera,” says Marin.  “It was quite an effective and impressive look.”  A 40th anniversary video was shown and when it finished Scenius lit a jib shot of a piano and vocalist.  As the lights came back up the phone bank in the background was visible behind a scrim.

MacDonald likes Scenius’s “variable dimming from 0 to 100” and the “very nice soft edge for mellow numbers.  The colors in the color wheel are so rich, too!”

Marin gives high marks to the “gobo selection, which gave us a variety of effects.  When we put movement on the gobos Scenius looked amazing!”  He also notes how “unlike a lot of other fixtures, Scenius doesn’t distort certain darker blues to the camera.”

MacDonald emphasizes the power and punch of the lights. “When we changed from 8º to 50º the beam lost very little intensity if any.  It was still very powerful and cut through the hazers.  We got comment after comment from the video crew afterward about how the lights punched through.”

In short, MacDonald found Scenius “awesome” and says, “it did everything the literature said it would – and much more.”

“Clay Paky fixtures are always number one on my list,” adds Marin.  “I use them whenever I can – on movies, commercials and concerts.”

Francesco Romagnoli, Clay Paky Area Manager for North and Latin America, added, “Our fixtures work as well on television as they do for live events.  This was an impressive program and we were glad to be a part of it.”