Clay Paky at the One Harmony Choir Festival 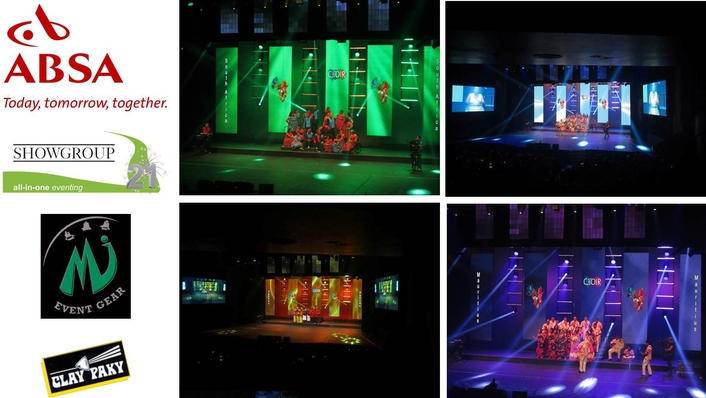 .
Choirs from 12 African countries competed in the 9th annual One Harmony Choir Festival at the Joburg Theatre. Having supplied the full technical equipment since the show’s inception, Showgroup were honoured to be involved once again.

This competition recognises the commitment, sacrifice and hard work of all the choir members, employees of the Barclays Africa Group, who practiced uncompromisingly, outside of normal working hours.

When travelling abroad ten years ago, Robbie Blake, director of Showgroup, was inspired when seeing Clash of the Choir. “Back in the day, Robbie pitched a similar concept to ABSA bank when they wanted to do something for their staff,” explained Andries from Showgroup. ABSA -  now under the Barclays Africa Group umbrella - have run the event ever since.

For the latest competition, the crew moved into the Joburg Theatre as Starlight Express was moving out. “The Joburg Theatre, especially the technical manager Simon James are on the ball and are able to provide whatever you ask for,” said Andries, responsible for the design of the show and project manager.

Showgroup sub-contracted MJ Event Gear for additional equipment and staff. The companies regularly work together and have formed a wonderful relationship over the years. 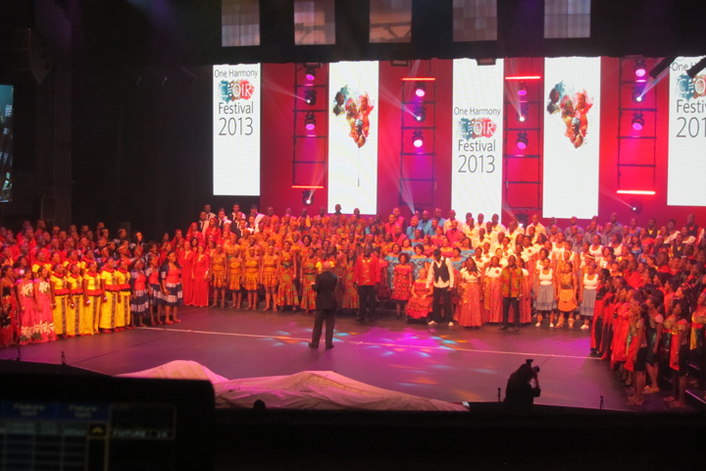 This was the first year HD was used for the live broadcast. The production was recorded for a designated television channel and ABSA / Barclays Africa Group branches were invited to log in and vote for their choir of choice.

It was tricky to get the lighting just right. “In rehearsals when the camera first arrived, we lit a single choir with 16 side lights, 2ks for backlight, 2k top lights and Profiles,” said Andries. “When the director arrived he asked, ‘Is that all you’ve got?’ One of the items included 460 people on stage. Needless to say, it took some tweaking and moving choir members about to get the right look for camera.

With experience in designing Johnny Scholtz was asked to light the show. “He had a big gel list,” laughs Andries!” As always, the Clay Paky Sharpies were popular in this festival.

The greatest challenge was fitting all the gear onto the stage. There were two 14m stage tracks which moved the choir on and off the performing area. Two stage managers were kept on their toes to ensure a smooth production.

This year marked a significant step forward for the festival as choirs from each of the countries in which Barclays Africa operates were represented for the first time. Choirs from Botswana, Egypt, Ghana, Kenya, Mauritius, Mozambique, Seychelles, South Africa, Tanzania, Uganda, Zambia and Zimbabwe participated.