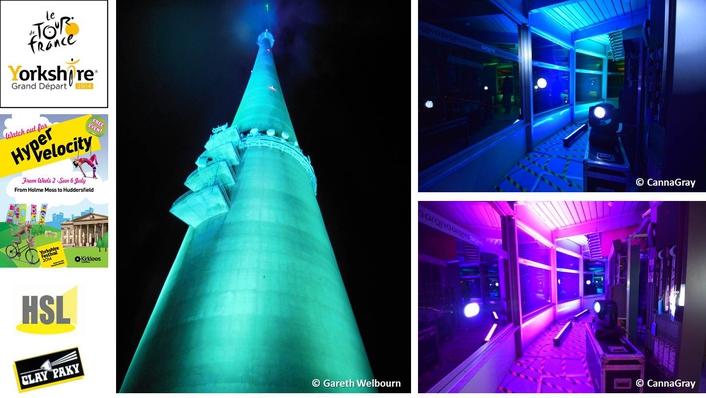 The Arqiva Tower is one of Yorkshire’s most famous landmarks at a height of 330m it is the tallest standing structure in the UK
Lighting designer James Bawn specified the strong beam of the Clay Paky Sharpy to crown his colourful lighting design for Kirklees’ Arqiva Tower, known locally as the Emley Mast, during the opening of the Tour de France celebrations in Yorkshire.

The ten Clay Paky Sharpy fixtures, supplied by Blackburn based hire outfit HSL, beamed out from the tower’s 272m high control room creating dramatic aerial effects across the skies above Yorkshire’s Emley Moor that could be seen for miles around.

“As part of the 100 day Yorkshire Festival, Kirklees held a local week long ‘Hypervelocity’ festival to celebrate the Leeds opening of Tour de France,” explains Bawn. “As part of the festival resident artists and designers were asked to light up famous landmarks. As I grew up round here and know the area well I was asked to put together a design for the Arqiva Tower on Emley Moor.

”Because of his attachment to the local community Bawn wanted to create a lighting design that had an inclusive element to it.

“The idea behind the design for the Arqiva tower was to get the local residents involved,” explains Bawn. “During the two days that the tower was lit the Yorkshire community was able to control its colour by Tweeting in using the hashtag #lightthemast. The event was so popular that this became the fourth biggest Twitter trend in the UK over those two days!”

The Arqiva Tower is one of Yorkshire’s most famous landmarks at a height of 330m it is the tallest free standing structure in the UK. To light such a formidable structure Bawn selected fixtures that he knew could provide high-octane, powerful effects.

“I knew the Clay Paky Sharpy was the right tool for the job before I even specified it,” explains Bawn. “I used the fixtures to create various high-altitude effects, everything from simply shooting out light across the sky in tight beams to panning which created a high-speed 360º ‘helicopter’ effect.”

In addition to needing fixtures with high outputs it was imperative that Bawn and his team used lightweight fixtures that could be easily transported up the tower’s shaft to the 360º control room at the top.

“At 148cm x 19kg the Sharpy really fit the bill,” continues Bawn, “It provided me with a powerful beam fixture that was also small in size and lightweight. There is not much space up in the control room so the fixtures we used up there had to be below a certain size otherwise logistically the whole thing would have been impossible.”

The award winning Sharpy is renowned for its super bright, razor sharp beam that belies its lightweight exterior. The fixture has a well deserved place as one of the most popular lights used in the entertainment technology sector.

“I knew what the Sharpy was capable of before I even specified it,” finishes Bawn. “Needless to say it did not let me down.”