Billed as ‘the UK’s most popular classic music show’, the performance features not only the aural beauty of the Royal Philharmonic Orchestra, conducted by John Rigby, but also state of the art lighting and laser technology to create a visual feast as well.

Put on by the legendary classic music promoter Raymond Gubbay, the dramatic overtures were complemented by cannons, guns and 2,000 indoor fireworks, which brought the show to its famous thundering finale.

To achieve the bombastic looks, Marenghi carefully selected a rig of Clay Paky fixtures which were suitable for the splendour of the Royal Albert Hall but also produced the latest effects to wow the audience.

Clay Paky Sharpys were rigged above the floor seating and programmed to create a rainbow of colour, using the Sharpys’ precise and powerful beam. The Sharpy offers 14 different colours and 17 gobos, allowing you to change the shape of the beam and create an array of spectacular mid-air effects.

“The optics of all the Clay Paky fixtures we used are wonderful, allowing me to create a multitude of effects with far fewer fixtures,” says Marenghi. “We all know that the Sharpys are bright, but seeing what they are capable of, ‘searching’ the hall and beaming onto the audience with such vivid colours was incredible.”

Marenghi specified Sharpy Wash fixtures for general wash on the stage, the orchestra and singers, and to light the conductor’s position. 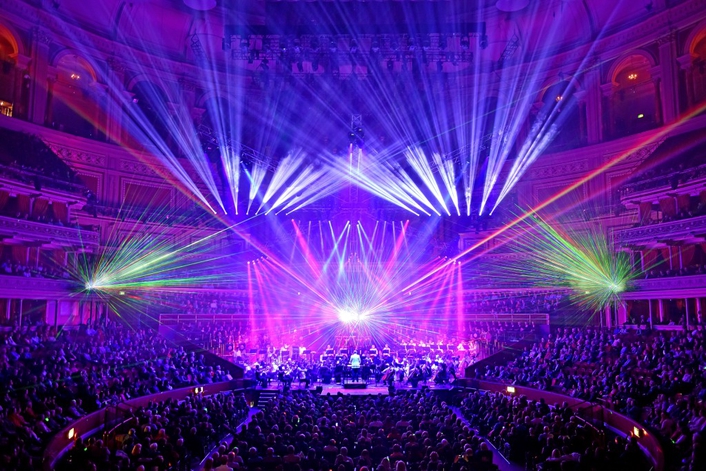 The finale of the show featured a huge Union Jack flag unfurling from the ceiling and over the organ as balloons and streamers were released from the roof. To light the flag, which was the centrepoint of the dramatic ending, Marenghi specified four Clay Paky Mythos fixtures.

“Mythos are fantastically bright with an outstandingly large light beam and beam angle, which allowed us to light the entirety of the Royal Albert Hall’s organ and the flag as it descended, with just four lights!” adds Marenghi.

The Clay Paky fixtures were supplied by Stage Electrics with the Alpha Spot HPE 1500s, in the main rig and HPE 700s on the stage floor. From here the fixtures supplied the aerial and stage wash gobo effects alongside the general stage washes from the Sharpy Wash 330s. 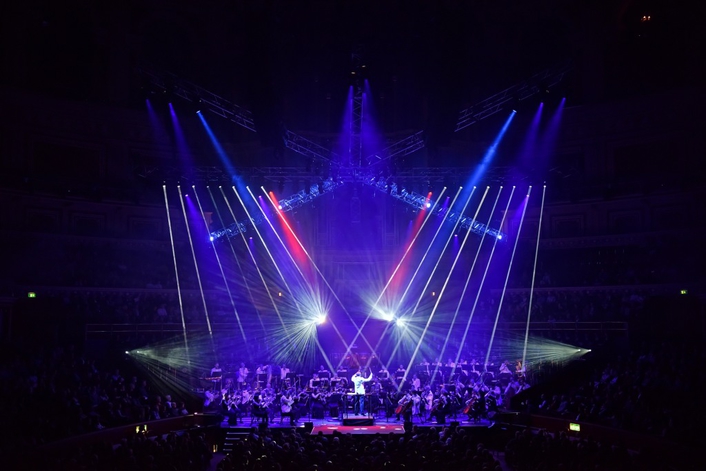 “We have a strong ongoing relationship with Clay Paky as they have an ear for lighting designers and their aspirations regarding new fixtures, they take a lot of feedback from LDs and turn that into some fantastic and innovative products,” says Marenghi. “As the lighting designer, it’s my responsbility to choose the best technology available for the job.”