Imelda Staunton stars as the legendary Mama Rose in a space now enhanced with improvements to foyers, front of house, the auditorium, backstage facilities and technical infrastructure. The refurbishments are part of the RENEW project, which aimed to sustain and improve the unique Festival Theatre building at the same time as working sympathetically with the original design.

"Charcoalblue worked closely with the Chichester Festival Theatre and Haworth Tompkins to improve the circulation, accessibility and audience sightlines, increase the seating capacity, technical access, replace infrastructure with more sustainable technologies to minimise future running costs and upgrade and improve the auditorium rigging, lighting and sound systems," says Charcoalblue's Project Manager Alex Wardle. "CFT can now hang more equipment over the stage and get to it more easily. The entire stage is demountable, which means that 'Gypsy' can be staged with the band in an orchestra pit, rather than behind the stage. We worked with Skelly & Couch and GDS to develop an LED version of Chichester's 'starry night' houselights, which use less power and don't require the crew to spend hours changing lamps."

The project arose from the recognition that the original building was operating on a scale way beyond what was envisaged in 1962. Originally built on a budget to operate for an 11-week summer festival with 75,000 visitors a year, the theatre is now open year-round with over 300,000 visitors annually.

Wardle spent a lot of time with Chichester Festival Theatre's (CFT) technical team, getting 'under the skin' of the client to understand what was required.

"I'm proud to say that Charcoalblue gave the time, resources, and staff expertise to this project, pulling in all of our experience and matching it with CFT's in-house team's needs - it was truly a collaborative effort, between us we could create something that each side couldn't do alone," says Wardle. "The CFT building presented some serious challenges due to its shape, structure, and infrastructure, which required a lot of head-scratching and detailed analysis. However, we managed to create a much more streamlined and usable space, especially back stage where accessibility and practicality has been transformed from the original design."

The key improvements include: bigger foyer areas with more space, light and seating - and twice as many toilets; improved access facilities with two new lifts, making the theatre fully accessible on all levels; transformed auditorium with increased seating capacity and refurbished seats; an increase in the auditorium rake, improving sightlines and intimacy by bringing audiences closer to the stage; a new extension housing a rear stage which is level with the stage, a large new get-in lift, significantly improved backstage facilities for actors, creatives and theatre staff; changes to make the building more energy efficient including a new ground source heat pump system to both heat and cool the building. 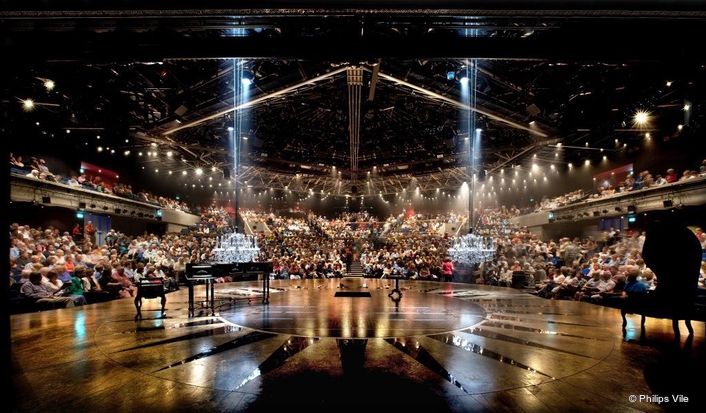 The renewed auditorium: The entire stage is now demountable. 'Gypsy' can be staged with the band in an orchestra pit

"Charcoalblue has been tremendously supportive in helping us walk that tightrope of 'can do' and 'cannot do' you find in every building project," says Dan Watkins, Project Director, Chichester Festival Theatre. "The CFT team has been guided through the decision-making process with patience and calm."

The Grade II* listed Chichester Festival Theatre is one of the UK's leading producing theatres, regularly selling out the 1,200-seat auditorium and transferring plays and musicals into the West End of London. The theatre was inspired by Tyrone Guthrie's thrust stage at Stratford Ontario and designed by architects Powell and Moya. It opened in 1962 under the directorship of Laurence Olivier and the building was Britain's first modern thrust stage theatre.

About Charcoalblue
Since Charcoalblue's inception in 2004 the company has become the go-to consultancy for many of the country's leading architects, venues and theatre organisations.
In just under ten years Charcoalblue has provided its services to some of the UK's most recognised venues including national treasures such as: the Royal Shakespeare Company, the Royal National Theatre and Glyndebourne Festival Opera. Charcoalblue has also been an integral member of the design teams for cutting edge venues including Siobhan Davies Dance, The Young Vic and Graeae.
In addition Charcoalblue has delivered a number of temporary venues, perhaps best known is The RSC Courtyard Theatre and - one of Charcoalblue's most visible projects today - the recently opened NT Shed on London's Southbank.

Since inception the company has extended its geographical reach and today Charcoalblue provides its distinctive design expertise in Europe, the Middle East and beyond. The company has contributed to high profile venues such as Antwerp's Queen Elisabeth Hall and the Qasr al Hosn redevelopment in Abu Dhabi.
In 2012 Charcoalblue opened its US Office in Manhattan, New York. Since then the company has accepted and delivered projects from across America including Steppenwolf Theatre Company, Chicago Shakespeare Theater and St Ann's Warehouse in Brooklyn.
Today Charcoalblue provides full consultancy and implementation services in theatre design, space planning, acoustics, technical system design and strategic business planning.
Charcoalblue's collaborative approach and attention to detail has consistently won the company, and its staff, industry awards, ecstatic reviews from the theatrical and architectural press and, most importantly, high-praise from the performers, technicians and audiences who work for, and inhabit, their spaces.