The skill of multimedia artists, 59 Productions, the musical talents of internationally acclaimed cellist Sol Gabetta, and the magic of BlackTrax realtime motion tracking system has come together to create the most spectacular and memorable promotional film for the BBC Proms to date.

It encompasses performance artist, Sol Gabetta debuting her highly anticipated performance of Elgar’s Cello Concerto in E minor.
A world first, the artwork that is presented on the cello was designed by 59 Productions and Gabetta’s cello is the smallest surface area that the team has ever mapped. This particular project was a challenge because the surface area of the cello is tricky to map out, especially since Gabetta wanted to be able to move the instrument as she normally would when playing.

Small and discreet BlackTrax Beacons were placed on the cello in hidden places so its position could be calibrated and surface mapped on to the cello and track its movements, which are then submitted as data to the production’s media server. Thus ensuring that when the cello moved, the projected image also move, thus ensuring that the images are perfectly imprinted on the intended surface area with complete accuracy.

What was traditionally an aural spectacular, the element of video has now been brought in with astounding and spectacular results. As Andrew Caspari, head of digital at BBC, said in a behind-the-scenes video interview: “Things that might be going on in the minds of the listener are all encompassed within the musical instrument itself.” 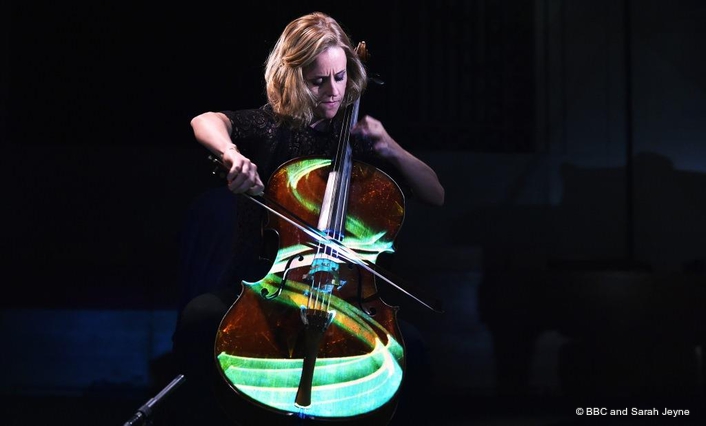 BBC Proms is an eight-week summer season of daily orchestral classical music concerts and other events that starts on July 15, 2016