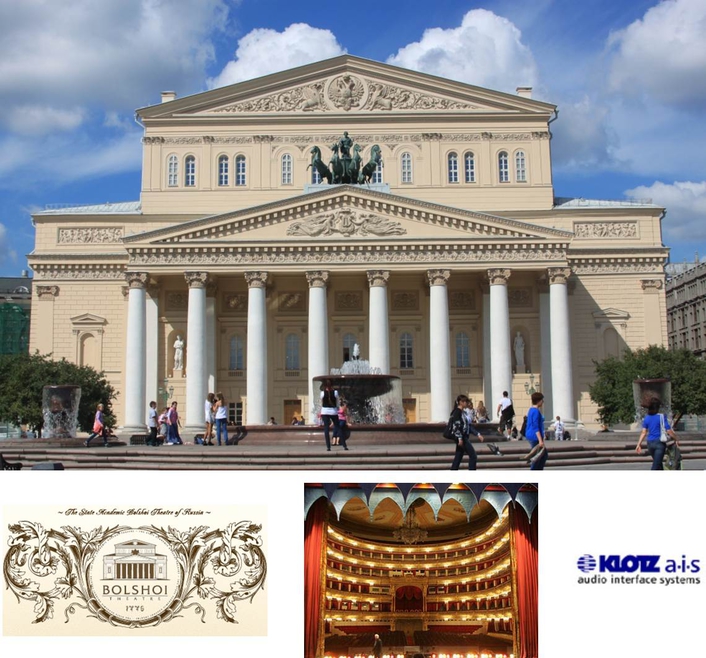 Full-scale renovation of Moscow's world-famous theatre completed
The official reopening of the Bolshoi Theatre on 28 October 2011 marks the successful completion of one of the most challenging and extensive theatre renovations in modern times, taking a total of over six years. Only the very best technical components were good enough for the world-famous ballet and opera theatre, a prime symbol of Russia's cultural and musical status. KLOTZ cables were used for large parts of the audio-visual cabling throughout the theatre.

Over 300km of professional audio, video, camera and optical fibre cables were supplied for the ambitious and technologically sophisticated project by the internationally known German cable producer KLOTZ a.i.s., based in Vaterstetten near Munich.

The primary goal of the Bolshoi Theatre project managers was not only to renovate the opera and ballet theatre thoroughly, but also to restore its legendary acoustics. During project planning the client stressed the importance of high technical performance and future-proof design for all audio and video components used. For this reason, around 70 km of state-of-the-art KLOTZ Fibre Optic Breakout Cable alone were installed to power the latest fibre-optic technology. While optical fibres in the OS2-ZWP (Zero Water Peak) category were used for single-mode applications, multimode cables have OM3-category fibres. The rigorous fire propagation standards under test category A in accordance with IEC 60332-3-22 were complied with by using ultra-flame-retardant FRNC material for cable jackets.

KLOTZ a.i.s. was closely involved in the planning and execution phases of the project over a three-year period, working with its local sales partner to ensure ongoing delivery of all cable types in keeping with the meticulous schedule. The project was one of the largest tackled by KLOTZ a.i.s. in  2010/11.

Frederic Kromberg, Director of International Sales EMEA, is particularly keen to stress the excellent collaboration with KLOTZ's Russian partners: "Experience and professional implementation by all staff and partner companies involved in the project are absolutely critical in any large-scale project. I am especially delighted that we and our partners were successful in completing a project as prestigious as the Bolshoi Theatre.“

The Bolshoi Theatre in Moscow was founded in 1776. The theatre building has stood on its present site in the heart of Moscow since 1780. Seating a total of 1,800, the building - in Russian Classicist style - is one of the world's most magnificent theatres.