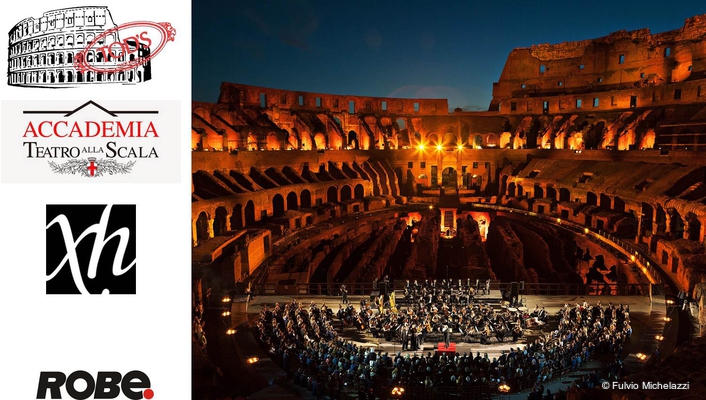 The Colosseum in Rome – world famous heritage site and one of Italy’s most popular tourist attractions - was originally constructed in 70 – 80 AD and is the largest amphitheatre ever built. This summer it was reopened after three years of extensive refurbishments – the first in its history.

The momentous occasion involved a high profile gala event. A special classical programme was played by the Accademia Teatro alla Scala conducted by Zubin Mehta, and the Colosseum was lit by lighting designer Giancarlo Toscani who utilized twenty Robe BMFL WashBeams for this unique occasion.

Giancarlo was asked to propose a lighting scheme by the show director, Fulvio Michelazzi, working for event producers Studio Exhibita for end client Grupo Tod, one of the co-sponsors of the restoration project along with the Italian government working in a PPP arrangement.

The brief was to light the iconic structure tastefully, preserving its breath-taking architectural and historical integrity and also to emphasise a ‘Made in Italy’ concept, for which he used the logo and the colours of the Italian flag to highlight ‘simplicity and elegance’.

This was the real challenge. He needed a fixture that was super-bright to throw light long distances across the venue which has a variety of diameters of between 156 and 188 metres due to its elliptical shape and also a source with finesse and quality.

He chose the BMFL WashBeam as the best option to provide the power to illuminate and colour the inner walls of the Colosseum for the performance. Even in the dark shades the effect was bright and effervescent, and he could shape the output precisely using the shutter blades which was vital to get the desired results.

Using structures or trussing had to be avoided in case of damaging the building, so the luminaires were diligently positioned around the Colosseum, using available spaces not accessible to the public like balconies and walls on each ring of the amphitheater. 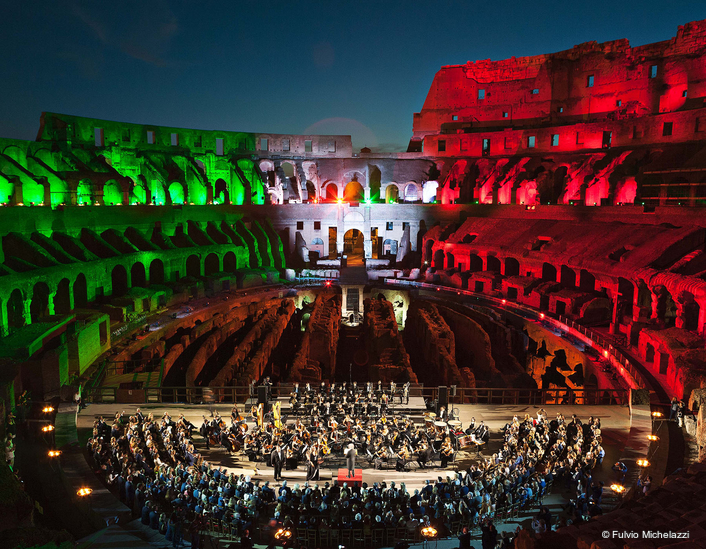 In advance, Giancarlo created a 3D graphical presentation of the proposed lighting for the client offering a virtual 360 degree view, and illustrating how the original stonework, standing for many centuries, might look with his carefully considered application of light.

He needed the lighting treatment to add to an already magical and special feeling and to   play with the shadows, texturing and other intricacies of the stone, enabling him to create subtle movements with sinuous cross fading, adding depth and allowing the environment to breathe and come alive.

Producing a dynamic effect on the static stone was an exciting path to follow that required great imagination. With lights seemingly chasing shadows … and vice versa, it seemed like the walls of the Colosseum were re-living the history “in a tide of emotions" he expressed.

He comments, “Robe’s products are extremely reliable and I believe it is among the best manufacturing brands in this industry today".

Assistant LD and collaborator Danilo La Rosa helped programme the show. The event was produced by Studio Exhibita, who oversaw the realization of the entire project. under the guidance of supervisor Marco Ramon, project leader Elisa Brambati and executive producer Caterina Carlini. The BMFLs and other lighting equipment for the re-opening event were provided by New Light "Milano". 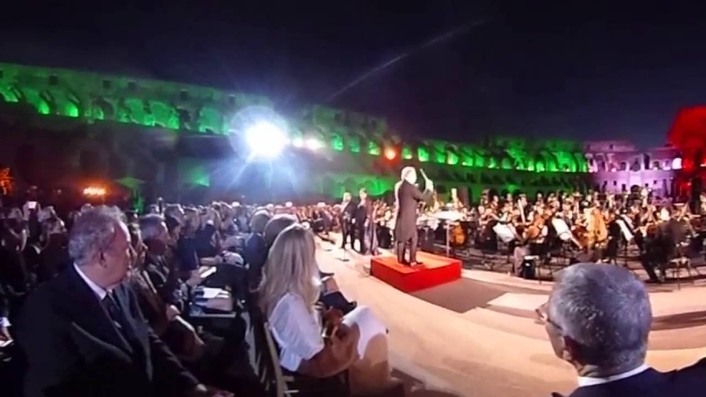