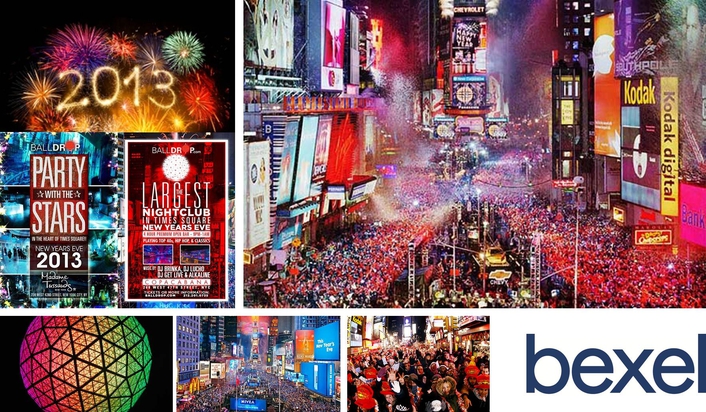 .
Bexel, a unit of the Vitec Group’s Services Division and a leading worldwide provider of broadcast services and solutions, will once again be on-site supporting live coverage of the iconic New Year’s Eve celebration in Times Square as it is broadcast around the world. Bexel's team of expert engineers will coordinate the complex wireless operations and establish a fiber infrastructure for all feeds going to and from the production truck handling the coverage. For over a decade, Bexel has provided equipment and services to support national and international broadcasts of the Times Square celebration.

As this year’s event entails five zones of RF coverage—four outdoor locations, spanning from the main outside stage at 43rd Street up to 46th Street at the Nivea Stage, as well as inside Times Square Studios, including the green rooms and production hallways—Bexel will deploy its RF Over Fiber Antenna System. Designed to enhance the show's wireless capabilities, the system is scalable to any size building or location and offers a single point of interface for wireless equipment to the production truck. Comprehensive coverage requirements for the host network extend from 47th Street and Broadway to 43rd Street and Broadway.

Full duplex, Bexel’s RF Over Fiber System offers the capabilities of both transmit and receive carriers over RF fiber—accommodating wireless microphones, IFB and wireless intercoms in one system. It also consolidates the required RF equipment, which can save on the use of very limited and coveted RF spectrum. In addition to Bexel-ASG’s RF Over Fiber Antenna System, other RF equipment provided by Bexel includes 12 channels of wireless PL using six Telex BTR800s, 24 belt packs, four Lectrosonics IFB transmitters and six wireless microphones. Bexel will also staff the event with six on-site engineers for audio and wireless setup and support.

“Seamless coverage of all zones through the RF Over Fiber System is a tremendous challenge due to the sheer quantity of wireless devices in use, the shrinking UHF spectrum and the density of people at the event,” says Jim Dugan, senior project engineer, Bexel. "Fortunately our expertise and solutions will allow us to provide another memorable New Year’s Eve to those watching on television."

Bexel will also provide the fiber infrastructure for all feeds going to and from the production truck in Times Square. Installed during overnights by local union workers prior to the event, there are about three miles of fiber set up around Times Square. "These fiber solutions are the backbone of the show," says Perry Sanderson, technical sales specialist/fiber, Bexel. “Bexel fiber essentially touches all feeds that are broadcast around the world." Bexel will provide a custom rack built with fiber optic systems to accommodate signal transport to various locations around Times Square, including Duffy Square and Nivea Stage, to name a few. This infrastructure will then carry these signals from surrounding events and the classic ball drop and distributed to domestic and international broadcasters.

“Thanks to the relationships cultivated over a decade with the Times Square Alliance, Bexel is uniquely positioned to provide fiber optic infrastructure support,” says Sanderson. “Our portfolio of rental equipment and technical expertise allow us to create a fiber network that ultimately provides the opportunity for everyone around the globe to experience the most iconic New Year’s celebration in the world."