SIS LIVE at Jodrell Bank for BBC Stargazing LIVE 2013
In January SIS LIVE provided outside broadcast and uplink facilities for the third series of BBC’s Stargazing LIVE 2013. Between 8th and 10th Jan three shows of one hour each, presented by Professor Brian Cox and Dara O’Briain, were broadcast from the control room and other locations at the Jodrell Bank Observatory.

This enthralling series of Stargazing programmes, which aired on BBC 2 and BBC HD, covered such topics as the search for life on Mars; how to chart the history of the Universe by looking into space, and a study of comets, meteoroids and asteroids. The British public was encouraged to get involved through a number of events around the country with Astronomical Societies and National Trust venues hosting star-parties and providing great locations for budding amateur astronomers.

Presenter Liz Bonnin delivered various live and recorded inserts for the programme from locations in the USA, including from NASA’s Jet Propulsion Lab in Los Angeles where she reported on the latest Mars findings uncovered by the Curiosity Rover. In the second show she met the teams at NASA tasked with building the largest space telescope ever constructed and in the final episode she travelled out into California’s Mojave Desert to see how we track space objects which pass close to the earth, including those potentially on a collision course. These inserts were delivered by satellite link to Atlanta, transmitted by transatlantic fibre to Germany and then satellite linked to Jodrell Bank.

Via a live link from the BBC Weather Centre meteorological experts were also able to give viewers live forecasts on when and where to expect the best conditions for their own stargazing activities. An outside broadcast feed was also taken in from a replica of the Herschel telescope in Derby, UK.

SIS LIVE provided a main HD and back up SD circuit with two way communications, allowing these inserts to be cut into the programme. All incoming and outgoing links were handled at Jodrell Bank by the SIS LIVE hub communications vehicle Link 21. Link 21 is the largest TV satellite uplink truck in the UK and has enormous circuit capacity. It’s capable of generating a six channel MPEG multiplex on its dual redundant uplink whilst simultaneously managing the reception of up to five satellite feeds from other venues.

SIS LIVE’s flagship outside broadcast vehicle OB 1 was ideal for these broadcasts due to its large production area, with every seat in the production area taken up by an operational person. This large space enables clients like the BBC to accommodate everyone, including in this case the Head of the BBC Science Unit Andrew Cohen. Stationed at the Jodrell Bank Observatory OB 1 handled all incoming feeds, combining them to create this complex programme. On-site there were six broadcast cameras moving between three different locations: the main control room, the exhibition centre, outside by the main telescope. Two special starlight cameras in the nearby ‘dark’ field and a remote pan and tilt camera on a 34m hoist gave further shots of the proceedings.

One challenge of handling these multiple sources came with the management of different formats which had to be converted. The crew and equipment aboard OB 1 had to upconvert and standards convert the various incoming images to match the output. Scan converters were also employed to convert output from laptops into HD formats suitable for transmission. 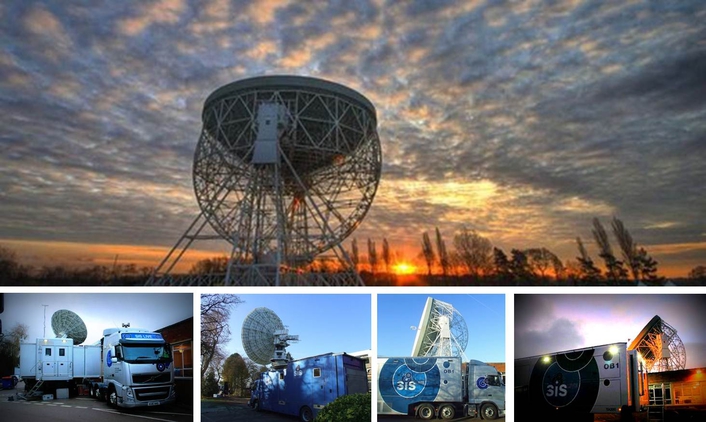 Inside the studio itself three in vision 52” plasma screens were installed, plus a 63” plasma screen which was remotely operated via an iPad by Professor Brian Cox, allowing him to illustrate the various mind-bending concepts and theories discussed. In-studio sound was captured from four different positions using up to 10 radio mics and 3 in ear monitoring systems. SIS LIVE also installed two independent edit suites – one located in OB1 and another remotely in Jodrell Bank observatory, which afforded users 24hr a day access.

Through its iDirect system SIS LIVE also provided two independent internet broadband networks which proved essential, allowing the OB unit to downlink graphics and also providing the production team with essential resources for the creation of the show.

These highly entertaining and educational shows aired each night on BBC2 and BBC HD with the first episode receiving around 3.1 million UK viewers, with an additional 30min programme titled ‘Back to Earth’ broadcast directly afterwards receiving 2.1m viewers on the first night.