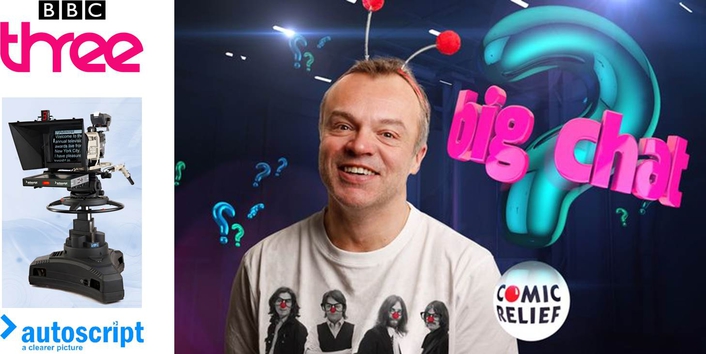 "The teleprompting system was set up on the Tuesday ahead of rehearsals on the Wednesday," explains Charlotte Latham, Head of Rentals - Autoscript. "This was a ten camera show of which six on-camera units were driven by an operator controlling a laptop PC running our WinPlus Prompting Software. The prompt script was routed via the studio control room to each camera in Studio Three. Live transmission took place from 7 pm on the Thursday right through to the small hours on Friday. The operator had to be on the ball and alert to sudden changes from production whilst supporting the presenters needs at all times."

The evening was a great success for everyone involved. Graham Norton achieved his ambition of breaking the world record for the most questions asked during a television chat show, reaching a total of 175. During the programme viewers donated £1,022,982 for Comic Relief.

Autoscript produces a wide choice of TFT flat screen on-camera prompters, now including the LED backlit range, in sizes from 3.5 to 19 inches. These have greater clarity and higher contrast than earlier models in the series, and are more energy efficient. Miniscript 5.6 has all the functions of its larger TFT cousins including composite BNC and Hi-rose inputs. It weighs just 480 grammes, making it perfect for handheld ENG and Steadicam use.

About Autoscript
Based in Twickenham near London's Heathrow Airport, the hire division of Autoscript (a Vitec Group company), offers a wide range of prompting systems including highly advanced lightweight flat-screen on-camera displays, wireless prompting, optical scroll controls with no potentiometer and a unique dual-colour tally system. A full hire service is available for all types of studio, office, stage or outdoor Teleprompter shoots, ranging from television shows and films to corporate productions, conferences and awards. Autoscript supplies all the equipment a client requires, a technician to set it up and an operator to input scripts, make changes, and control the speed of the words on the screen. Autoscript's hire division maintains the UK's largest team of teleprompter operators and riggers, plus a 24 hour booking and support line.