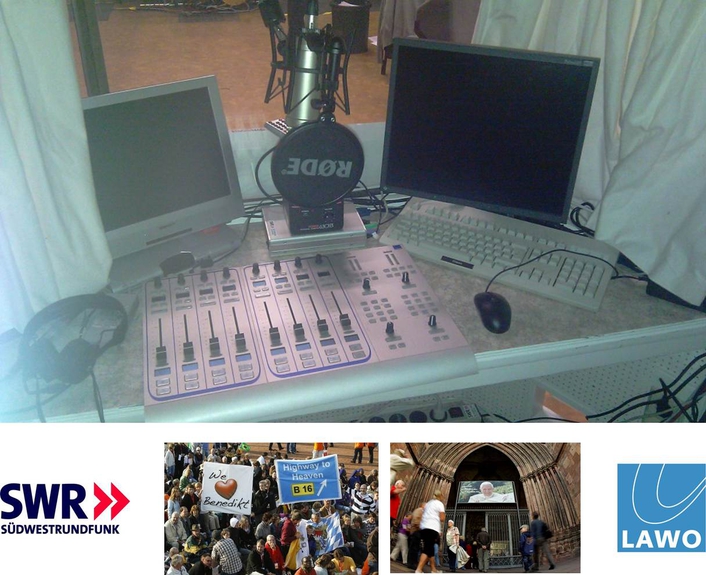 ARD Radio Covers Papal Visit in Germany with Lawo Technology
Germany’s SWR broadcast centre served as the routing complex for all ARD radio stations during the papal visit in Germany from September 22 – 25. Not simply providing a hub for all the source signals from seven remote locations, the centre also fed the ARD stations with fully produced audio contributions and two stereo feeds: one carrying live reports and soundbites, and the second one supplying live interviews with return feeds. Lawo’s crystal consoles and KS-16 modules were used to handle this broad array of sources – a relatively slim, but brilliant, technical solution!

For radio, the ARD must fulfil the individual requirements of approximately 40 different ARD stations who will have interviews and reports schedules that all differ from one station to another. Consequently, each station was provided with a ten-minute time slot during the papal visit, with the broadcast centre connecting the appropriate live signal with its corresponding return feed.

Tight Schedule
With SWR’s broadcast centre acting as the contact address and hub for all ARD divisions, as well as for the other production locations involved, the sheer number of requests from various broadcasters, and the correct switching of corresponding return feeds presented the greatest challenge. Thus it was essential that an up-to-date schedule, including any potential changes, was available at all times. Links to the OB vans, according to this schedule, had to be prepared in advance.

With the editors creating their contributions in the broadcast centre, each editor had to have direct access to many different audio sources. To ensure this, workspaces were equipped with Lawo KS-16 modules. A panel with additional keys designed specifically for use with Lawo components, the BR version of the KS-16 offers 16 keys and two VCA controllers for level and panning. During the papal visit, it was also used as a router, allowing to choose any desired source in real time, such as the international feed or a report.

Additionally, up to 16 stereo signals were recorded and saved in the broadcast centre using a DigaSystem unit. The routing of internal and external sources was facilitated using the Lawo hardware’s matrix function. Similar to SWR’s broadcast of the papal visit, atmos sound was provided by ZDF or N-TV; the mix was primarily created in the broadcast centre, following a similar procedure to that used during the FIFA Women’s World Cup.

Crystal Clear Audio
The edit suite featured an eight-fader Lawo crystal as the production console, a self-op workspace, and a commentator’s workplace for the exclusive feed. The second crystal was the heart of the broadcast centre, equipped with two faders for the programme feed (atmos and announcer), two faders for commentary, and four faders for recording, pre-listening, and the production of broadcast segments. The crystal console provides those specifications that make it the ideal solution for such tasks. 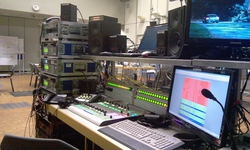 The identification code of each respective feed could be switched at the push of a button. A two channel monitoring control allowed switching from stereo to mono to supply the left and right speakers of the main monitoring system with separate signals. “For this production, we were basically looking for a freely programmable playout console with routing capabilities. I think that all Lawo products of any size offer this feature, but of course the crystal holds a key advantage over the mc² series or the Nova products when it comes to logistics, ie. its small size,” explained Sascha Schwoll, sound engineer for SWR, when asked why the crystal was chosen for this production.

He added that the crystal consoles also allow complete function chains to be activated at the push of a button, for example, changing a source input without altering any other parameters. “The central programming of macros via TCP/IP with the configuration software and Boolean algebra is always quickly and easily done, and allows a variety of functions to be adjusted individually for every end user,” continued Schwoll. “Moreover, the colour coding of keys and the large, freely definable graphic representation of all DSP parameters via the VisTool screen, ensure a clear overview at all times.”

All-rounder KS-16
SWR has currently up to six KS-16 modules at its disposal. These are used as a monitor matrix, a router, GPI/O control, and talkback or signal display.

Simultaneously pressing the source and the destination keys in the editing workplace, for example, switches a feed through the AND function, while the OR function can be used to revise other switching actions. The text-priority function allows the creation of dynamic labelling to display the active switching on a key.

Sound engineer Sascha Schwoll concludes with an explanation of the equipment selected for this task: “The most important factor in the choice of technology is its actual application during a project. For the papal visit, the OB vans provided us, most of the time, with feeds in which the audio had already been pre-processed. In that situation, the ability to process signals easily is, while still important, not our priority. However, functionality as a router is much more important. This requirement is fulfilled by the entire range of Lawo consoles, including both the smallest and most extensive solutions.”