Art and History: “Concert of Light” and grandMA enchant Jerusalem 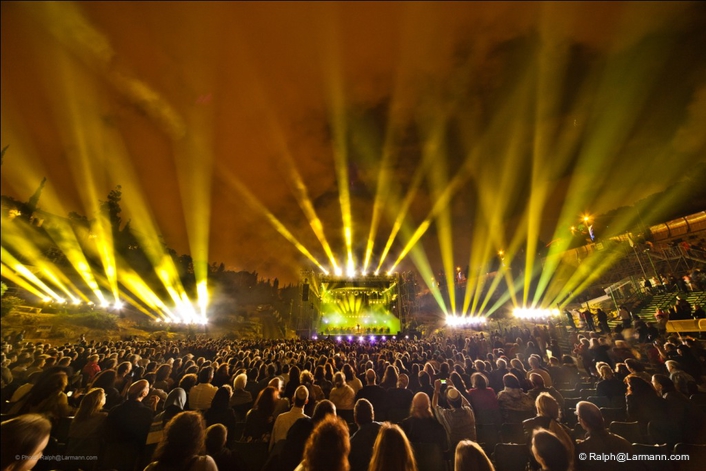 Concert of Light
Via the music of Brahms, Grieg, Beethoven, Tchaikovsky or Verdi you can travel back in time. A journey that seems so fitting for the city of Jerusalem, which breathes history with every building. It was therefore a perfect match when the music of these well known composers opened the "Jerusalem Festival of Light 2010" with the performance “The Light Concert". Taking place at the Sultan’s Pool in the Israeli capital the concert was merging music and lighting in a high-class event.

The performance included the work of internationally renowned lighting designer Gert Hof and the music of The Jerusalem Symphony Orchestra IBA orchestrated by Gal Altrovich. With the old city walls of Jerusalem as a dramatic backdrop to the event, it also relied on the latest technology, with a grandMA system used for lighting control. Lighting director and programmer Ofer Brum ran the show on a grandMA full-size console with a grandMA light as a backup and two MA NSPs (Network Signal Processors).

Ofer Brum explains the development of the concert’s lighting: “The show programming was done on a grandMA full-size with MSD (Martin ShowDesigner) 3D lighting visualisation software. I made the 3D model, including stage trusses, moving hoists and all lighting gear. After the model was approved by Gert Hof, it took four days to program the whole show. Pre-programming the show proved vital, as we only had two nights on site to focus and test the whole setup.”

Besides a plethora of other lights 63 x 4K search lights were installed for the show and reached with their beams into the night sky above Jerusalem.

Gert Hof gave us an exclusive insight into developing this project: “The reason for this event was the Israeli Music Festival and the Festival of Lights in Jerusalem. For the first time I was not working with my own crew or equipment. All personnel and equipment, which included a grandMA, were supplied by the Israeli company ‘The Art of Light’ in a highly professional and focused operation. “

“I chose the music for this event together with conductor Gal Altrovich, with the intention that it begins and ends with songs from Jerusalem. That is the reason we chose ‘Me’al Pisgat Har HaZofim’ for the finale.”

Says Hof: “The whole show was planned over a period of nearly four months. My focus was the language and alphabet of light. You have to read and hear manifests of light to translate them into architecture built high above in the sky. Orchestrations, events, all art is only interesting if it reflects the courage, passion, obsession, willingness to take risks and the thoroughness of the director – and it also has a unique character. An event is always a positioning, a definition and a delimitation. My orchestrations are shaped by my faith into the extraordinary, the peculiar, the visionary.”

“Surrounded by Mount Zion, the Mount of Olives, the Garden of Getsemani, the Wailing Wall…these are the things that make Jerusalem special,“ explained Hof, “I cannot and will not compare this event to my other works. It’s the respect for this city – right here, that I stage with my heart.”

Hof continues: “For me Jerusalem is the city of cities. It’s one of the oldest towns of the world. Surrounded by so much rich biblical history, this is a place with tales of great woe, the crucifiction and the resurrection of Christ is very special to me. It was a huge task to stage an event in the Holy City. As a German I feel a great humbleness being at this place. This event is a present to the residents of Jerusalem, and that’s why I relinquished a fee. This show is a bow to Jerusalem and a thank you because I was allowed to stage this event. I tried to amaze the people and to open their hearts. I wanted to give them the courage to dream.”

When asked about his first trip to Jerusalem Hof narrated: „My first visit in Jerusalem was to Yad Vashem. It was one of the most impressive moments in my life and has shaped my thinking and feeling ever since. That’s the reason why this event is governed by very personal emotions.”