Over the years, London based live production company ARC Sound has produced many corporate functions in the Underglobe, the events space situated beneath London’s famous Shakespeare’s Globe Theatre. But since the reconstruction in wood of the original Elizabethan playhouse on the Thames South Bank, a full production set up has never been allowed, or indeed attempted, in the main theatre space itself.

However, all that has now changed. To celebrate the Bard’s birthday in April, a concert audio production set-up was allowed into the 1500-capacity space for the first time. As James Dougill’s company has a long standing contractor relationship with the venue, they were asked to plan and produce a working solution which would meet both the technical requirements of the performances, whilst also being sympathetic to the unique nature of the building.

“This production was unique, as The Globe hasn't allowed anything this ambitious to take place previously,” confirmed Dougill. “I am certain eyebrows were raised initially when all these flight cases started appearing in a venue made entirely out of wood. But the fact we were able to achieve this without creating any noise pollution was down to the detailed pre-production planning we undertook before the event.”

They also ensured that the main loudspeaker system complied with the maximum weight load of no more than a ¼-tonne to the oak beams in the theatre’s ceiling.

Headlining were The Magic Numbers, supported by singer songwriter Johnny Flynn, along with magicians Barry and Stuart, Piff The Magic Dragon and Chris Cox. With the exception of the Magic Numbers all other performances took place on an oval thrust, which was in front of the main loudspeaker array hangs. 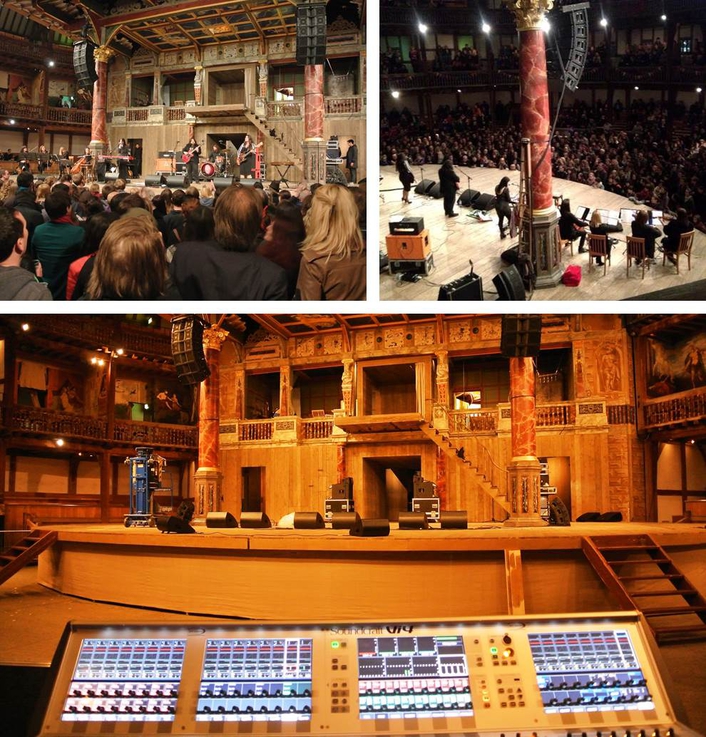 The ARC Sound director explained the rationale behind the design. “Although the throw distance was quite small, the coverage we required was steep—and since we were unable to suspend any further weight from the theatre ceiling, we opted for sharply angling back the VRX clusters. The key criteria here was the vertical coverage required to distribute sound evenly from the downstage edge right up to the third tiered balcony.”

The system was set up using a combination of the VERTEC LAC2 (JBL’s dedicated line array calculator) and Smaart field analysis, coupled with the company’s own extensive experience of deploying and using the products.

With a thatched open roof, James Dougill was mindful of the potential hazards of sound spill encroaching onto the Thames. “I wanted to get the boxes up into the air, focussed downwards, rather than on the ground pointing up,” he said. “Monitoring the volume during the show was more a question of using common sense than the SPL metering and LAeq measurement equipment we’d set up.”

At front of house ARC Sound fielded their Soundcraft Vi4, with 64-channel software upgrade, while down at the stage Raghav Narula was responsible for all of the onstage monitor mixes (also operating at near 64-channel capacity on one of the company’s Soundcraft Vi1 consoles).

James Dougill mixed the house sound, before creating a generic FOH set up (and an external rack of FX) for The Magic Numbers’ sound engineer Max Bisgrove — but instead, Max preferred to use all the desk’s internal reverbs and FX.

Summing up, Dougill said the quality of the amplified sound could hardly have been better. “The full range of VERTEC and VRX loudspeakers we stock gives us a very broad tool set to work with, and can be consistently relied upon to deliver.  Their profile was ideally suited to this application, and if the glowing comments we’ve received about the sound quality are anything to go by, we got it right.

“It was a huge privilege to have been involved in this project — and The Globe were so delighted they are already talking about the next event.”