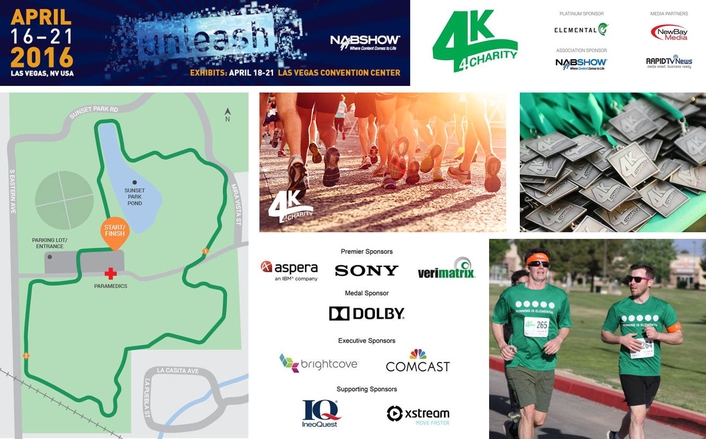 The 4km (2.49-mile) running and walking event starts at 7:30 am and loops through Sunset Park, which borders McCarran International Airport in Las Vegas. Light snacks and beverages will be available after the run. The 4K 4Charity Fun Run at the 2016 NAB Show benefits global charity Mercy Corps, an international development organization that helps people around the world survive and thrive after conflict, crisis and natural disaster, and Las Vegas-based charity The Shade Tree, a shelter for women, children and pets that are victims of domestic abuse.

Free Bus Transportation
Event participation is made easy with bus transportation to and from the run location provided free of charge. Buses will pick up participants from major NAB Show hotels starting at 6:45 am on event day and will drop off at the same hotels and the Las Vegas Convention Center (LVCC) after the run concludes.

“Registrations are up year-over-year and we’re looking forward to a great event, thanks to the generosity of sponsors and individual supporters,” said Laura Barber, director of publicity and events for Elemental. “I encourage everyone attending NAB Show to sign up today for this unique, fun and healthy activity!”

About the 4K 4Charity Fun Run
The 4K 4Charity Fun Run Series commemorates advancements in video technology by the global media and entertainment industry and the technology vendors that support them. Open to registered attendees at select industry tradeshows, the 4km (2.49-mile) run promotes wellness, networking and charitable giving in a fun, casual environment. To date, this event has raised more than $200,000 for global charities, including OXFAM International and Heifer International as well as local charities, such as The Shade Tree. For more information, please visit: www.4K4Charity.com/NAB.

About NAB Show
NAB Show, to be held April 16-21, 2016 in Las Vegas, is the world's largest electronic media show covering the creation, management and delivery of content across all platforms. With 103,000 attendees from 166 countries and 1,700+ exhibitors, NAB Show is the ultimate marketplace for digital media and entertainment. From creation to consumption, across multiple platforms and countless nationalities, NAB Show is home to the solutions that transcend traditional broadcasting and embrace content delivery to new screens in new ways.