3D Mapping at the "Blue Night" in Nuremberg

.
One of the biggest annually-held events in southern Germany is the "Blue Night" in Nuremberg, in which artists deal with the theme of light and present their work to the public. According to the organizers, the Blue Night attracted more than140,000 visitors to the Nuremberg city center and thus was a complete success.

One of this year's highlights was a 3D mapping projection on the façade of the new city hall with a total size of 43 x 13 meters, realized by the Frankfurt media production agency das modular and the technical service company ATMO&SPHERE.

Utilized for this purpose were four Barco HDQ-2K40 projectors with a total output of 160,000 center lumens to achieve maximum luminance and appropriate contrasts. Warping and video playback were integrated via the company-owned Coolux Pandoras Box Quad systems.

The Frankfurt architect and artist Martin Böttcher was responsible for the idea of "Phantastonauten". It provided the framework for the concept of image content. Video content, created with 3D programs and GreenBox recordings, as well as sound design were produced in the studios of das modular. 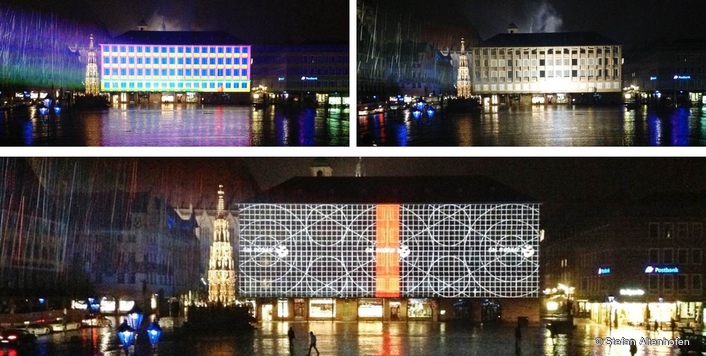 Both companies das modular and ATMO&SPHERE specialize in customized solutions in the area of professional event technology and have successfully executed joint projects for several years. The specialties alongside content / media / sound design also include the technical and creative implementation of special and event structures.
A specially developed exhibition stand system (named System Modular) is also part of the portfolio as well as an in-house recording studio. 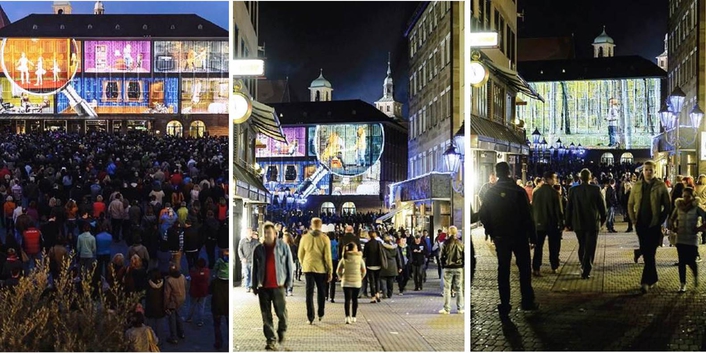