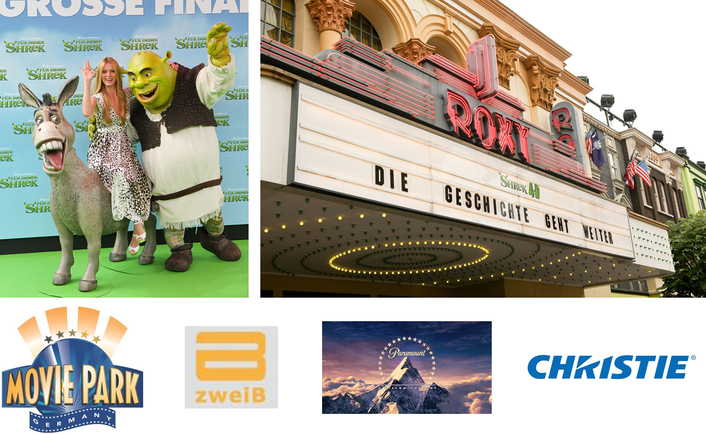 In the film itself, the popular green ogre is made to lead a quiet life with his family. After some initial hesitation, Shrek (German actor Sascha Hehn), settles for signing autographs on pitchforks, instead of frightening villagers like before. Yet deep within him, the bellowing of the beast is still there and is forcing its way out. Driven by the desire to feel like a proper ogre again, he lets himself be persuaded by the crafty Rumpelstiltskin (German actor Bernhard Hoëcker) to enter into a grave pact.

Suddenly, Shrek finds himself in an unusually twisted version of the legendary kingdom of Far Far Away, where ogres are hunted, Rumpelstiltskin is king and Shrek has never met his beloved Fiona (German actress Esther Schweins). Now it’s his turn to clear the damage his fault has caused and to save his friends, return his world into its original state and once again hold his big green love Fiona in his arms. In the grand finale, Shrek takes the audience with him into the most spectacular adventure so far, which is given additional depth through impressive 3D imagery.

For this premiere, Paramount Pictures Germany commissioned the team from zweiB, whose managing directors Marco Busler and Tammo Buhren were responsible for the technical implementation and provided the equipment. In terms of projection technology, they opted for two Christie CP2000-XB units. As Tammo Buhren explains, the 2K DLP Cinema® projectors were the ideal devices for this noted premiere. “Our task was to show digital cinema in 3D and in order to achieve that, certain specifications and requirements have to be fulfilled. On top of that, a high light output is needed in order to provide adequate brightness to the screen for 3D.”

In the three-dimensional world, Shrek needs all his strength to get things back to normal and the zweiB team provided the perfect illusion. No easy undertaking, since they were working with a screen measuring some18 metres by 8 metres in height.

The 3D signal for the new Shrek adventure was provided by a Dolby DSP100 server using the Dolby 3D-LS process. To support the technology, including both projectors, the zweiB team built a separate projection cabin into the room in order to cover up the server and technology from the audience. 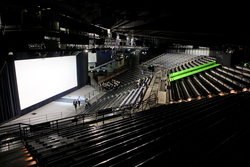 Christian Meyberg, responsible for technology at Paramount Pictures Germany GmbH, had agreed upon the cinema prior to the event and was every bit as enthusiastic about the sound and visual quality as was the cheering audience, including the prominent guests. All this took place in a hall that was never in fact intended as a large-scale cinema.

“These Christie devices are ideally suited for our particular business, in the course of which it does happen that we have to convert a hall or other venue into a cinema auditorium. On the one hand, the projectors provide an extremely high light output and on the other they provide the robustness and reliability that are required in rental operation”, says Tammo Buhren.

As a piece of 3D fun, SHREK FOREVER AFTER is three times as amusing, three times as exciting and three times as breathtaking! In the fourth and last sequel “Shrek Forever After” the lovable ogre fulfils the high demands and remains a thrilling adventure for young and old. Reason enough for this film which cost 135 million dollars in production to have already taken 71.3 million dollars at the box office during the first weekend in the USA. In Germany it left the competition far behind over the first weekend and despite hot summer weather and the World Cup football, it drew an audience of 400,000 into cinemas. Shrek is back!