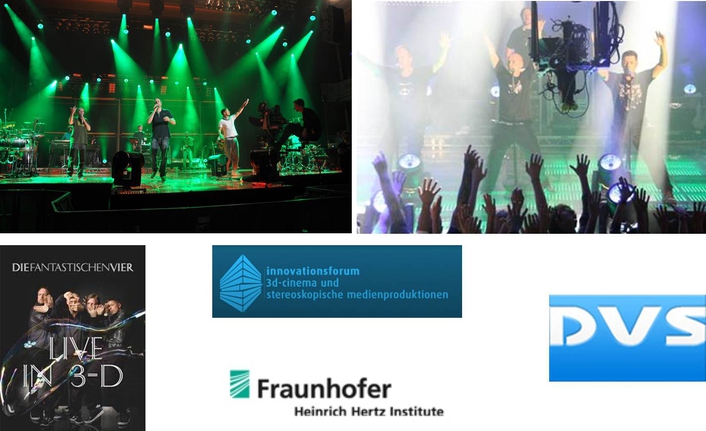 On September 28 a 3D live transmission via satellite gave thousands of fans the chance to attend the concert in movie theatres
For the first time in history, a 3D live concert was transmitted via satellite – thanks to reliable DVS technology. Countless fans gathered in movie theaters as the famous Germ an hip-hop band ”Die Fantastischen Vier” performed live on stage. DVS provided essential equipment for the 3D workflow inside the OBVan.

On the occasion of the "Forward2Business" congress about 3D Cinema and Stereoscopic Media Production in Halle (Germany), DVS technology helped to catapult the German band “Die Fantastischen Vier” into the third dimension: On September 28, a 3D live transmission via satellite from an OBVan gave thousands of fans the chance to attend the concert in one of 100 movie theaters all over Germ any, Austria, Switzerland, Luxembourg and Belgium. Equipped with 3D glasses, they experienced their favorite hip-hop band in 3D – at the exact same time that the concert took place.

The live broadcast of concerts in 3D constitutes a technological novelty: While in post- production it is easy to edit and depth grade 3D material, a live situation requires immediate adjustment of stereoscopic parameters in order to guarantee a perfect 3D experience for the audience. 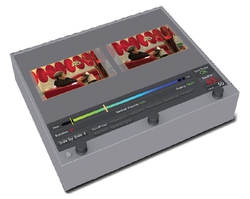 DVS enabled a seamless stereoscopic workflow at the event: In the 3D production chain, DVS’s video server VENICE was used both for ingest and play-out in the OBVan. DVS integrated STAN, the stereoscopic analyzer from the Fraunhofer Heinrich Hertz Institute into its video server. The whole team benefitted from massive time savings thanks to VENICE’s high-speed capabilities and appreciated its multi-channel options that allow for both ingest and play-out of stereoscopic 3D material in H D. Furthermore, the DVS SpycerBox served as the heart of the workflow as the central storage forthe entire uncompressed data coming from the five sets of 3D cameras involved. The material is currently being edited for the Blu-ray production.

Hans-Ulrich Weidenbruch, DVS CEO : “We always love for our equipment to be part of world premieres as D V S constantly strives for innovation. It was a great pleasure to provide a thrilling 3D concert experience with our VENICE video server – and many more will follow.” 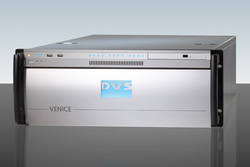 Thanks to its open system structure, VENICE can be integrated seamlessly into any already existing environment. The video server supports a variety of formats and codecs typical to broadcasting such as AVC-Intra, DVCProHD, DNxHD ® (8/10 bits) and XDCAM HD422, thereby paving the way for smooth production processes. Equipped with a new channel-grouping feature, VENICE enables parallel recording of e.g. stereoscopic material as well as frame-accurate starting and playing out of up to four camera streams, one per system , which is proving to be extremely helpful, especially in multi-camera productions. Furthermore, several VENICE video servers can be combined with each other. The current multi-camera view offered by VENICE allows for simultaneous viewing and separate control of four channels – switching between different screen windows is not necessary.

The central media hub SpycerBox offers the possibilities of a complete SAN system and proves to be a quick and cost-effective storage solution. With its numerous connection options, SpycerBox easily integrates into existing IT infrastructures and is custom-tailored towards collaborative workflows for DI with a demand for shared storage and real-time data access.