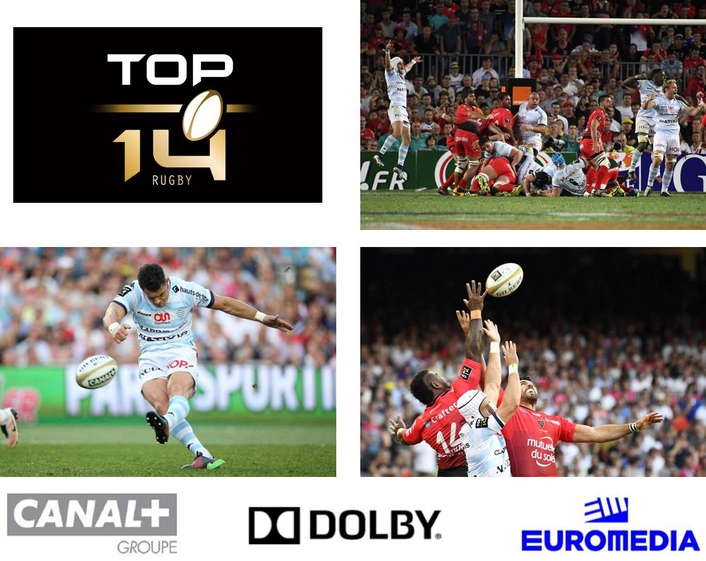 CANAL+ group, Dolby and Euromedia have worked together to complete the world’s first ‘live’ commercial test broadcast to feature Ultra HD and Dolby Atmos® sound. The test broadcast was completed during the Top14 rugby final, between RC Toulon and the Racing 92 on Friday June 24th, 2016.

Dolby Atmos sound fills your room and flows all around you with breathtaking realism to create a powerful entertainment experience.

Originally designed for the cinema, Dolby Atmos has many benefits for live broadcasting, especially sport. It allows you to capture the true atmosphere of the stadium and the intensity of the up-close action on the pitch. Combined with Ultra HD, CANAL+ subscribers experienced a new era of live sport on television.

CANAL+’s subscribers having a Fiber connection from Orange can enjoy this broadcasting with the new Livebox.

CANAL+ group reaffirms its position as a leading broadcaster, being the first to bring news technologies to TV audiences.

About Euromedia
In Europe and Internationally, EUROMEDIA covers all technical aspects of the production process, from filming through to broadcasting. Thanks to its expertise and extensive resources, EUROMEDIA has the capacity to broadcast daily sporting events, shows and TV programmes. EUROMEDIA is constantly working on broadening its technical innovations know-how in order to assist its clients in creating the television experience of the future

About Dolby Atmos
Dolby Atmos delivers moving audio—sound that can be precisely placed and moved anywhere in three-dimensional space, including overhead. It brings entertainment alive all around the audience in a powerfully immersive and emotive experience.

About Dolby Laboratories
Dolby Laboratories, Inc. (NYSE:DLB) creates audio, video, and voice technologies that transform entertainment and communications in mobile devices, at the cinema, at home, and at work. For more than 50 years, sight and sound experiences have become more vibrant, clear, and powerful in Dolby.

About CANAL+ group
CANAL+ Group is the leading pay-TV group in France, ranking first both for its premium-content networks with the generalist channel CANAL+ and associated channels, and its themed networks. With CANALSAT, it is also the top multi-channel platform and distributor for pay-TV offerings in metropolitan France and French territories overseas, as well as in Frenchspeaking Africa. A pioneer in innovative TV services, CANAL+ Group has a high international profile, with a presence in pay-TV in Poland and Vietnam. Overall, CANAL+ Group subscribers number nearly 16 million worldwide. Through its subsidiary STUDIOCANAL, CANAL+ Group is the European leader in production and distribution of feature films and TV series. A free-to-air TV operator with three national channels, including France fifth-ranking national channel, and in-house advertising sales division CANAL+ REGIE, the Group is also a benchmark player in commercial TV. CANAL+ Group is fully-owned by Vivendi, a global media and content production and distribution group.