Wimbledon in 3D - A World First 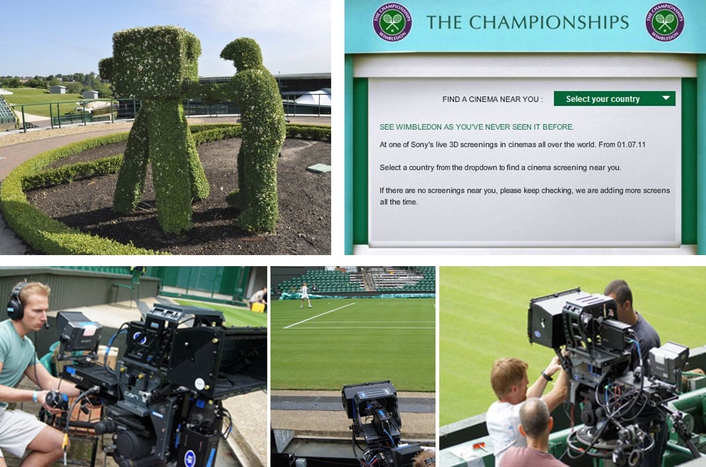 Sony technology aims to bring Wimbledon to cinemas worldwide
The 2011 Wimbledon Championships will see Sony and key partners bring a live HD 3D feed of Men’s Singles Semi-Finals and the Ladies and Men’s Singles Final to 3D capable cinemas and homes around the world, bringing the magic of Centre Court to a global audience for the first time.

Find A Cinema Near You

From the lens to the living room: Making it happen

Based on the 3D experience gained at several key sporting events over the past two years, Sony’s work with Wimbledon is on the cutting-edge of broadcast innovation. Sony has partnered with experts across the industry to make Wimbledon in 3D a reality and is the only broadcast manufacturer able to provide an end-to-end solution that delivers 3D content and expertise across the value chain.

Sony: An expert in live 3D

Enabling the broadcast of this iconic game in 3D also represents a continuation of Sony’s commitment to delivering compelling 3D content. The lack of live 3D content has always been a challenge, but sport broadcasting is tipped to change this, as the growth of content enables 3D to make the leap into the living room. Wimbledon is the next step on this journey, as Sony builds on its depth of experience already garnered from pioneering 3D broadcasts in other sports, including the FIFA World Cup 2010, the Ryder Cup 2010, the Sony Open Golf in Hawaii and Augusta and the UEFA Champions League Final 2011 among others.

Beyond the grounds of Wimbledon, Sony is working with Supervision to collaborate with a number of different exhibitors that will take the live 3D feed to cinemas around the world. From Hong Kong to Ecuador, global cinema exhibitors have partnered with Sony Digital Cinema 4K to screen the finals of the 2011 Wimbledon Championships, attracted by the opportunities presented by alternative content.

Return of the wow factor

The key for the cinema industry of the future is to re-inject the wow factor into the cinema-going experience – creating an experience that is hyper-real, interactive and emotionally engaging. Part of this lies in providing great content, but Sony Professional believes that technology such as 4K ultra-high-definition projection and HD 3D are the killer technologies that will get people out of their houses and back into the cinemas. The increase in the 3D films being shown is obviously one route that many cinemas are taking to boost their revenues. But alternative content is fast becoming the focus for reinvigorating the industry.

Not only Sony is filming the world’s premier tennis championship in 3D for the first time, but Sony is also aiming to screen the coverage live in High Definition 3D at 3D-capable cinemas across the globe. The live 3D production, in partnership with the Wimbledon host broadcaster the BBC, will also be offered to interested global broadcasters.

Sony will be giving fans the perfect opportunity to experience the Championships like never before in a completely new environment. Capturing the breathless performances, the drama, the passion and the unique atmosphere of the famous Centre Court, Sony will be bringing the exhilaration of Wimbledon to a larger audience than ever before. Fans will be able to see live every forehand, smash and volley in stunning big screen, HD 3D reality.

Find A Cinema Near You