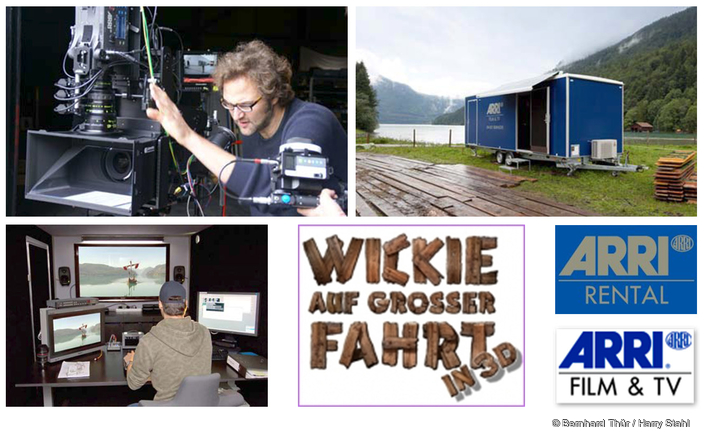 DoP Christian Rein - The ARRI on-set services trailer - Access to state-of-the-art technology
As a full service provider ARRI Rental supplies the camera and grip, as well as the entire 3D equipment. The package includes four brand new ARRI ALEXA digital cameras and the complete onset 3D playback and viewing equipment. ARRI Film & TV, meanwhile, will deploy its postproduction to the set for the duration of the shoot. The ARRI Film & TV on-set service trailer, created for this very purpose, is fully air-conditioned and equipped with state-of-the-art technology and space for several work stations.

This sequel to the first successful Wickie film, under the direction of Christian Ditter, is being produced by Rat Pack Filmproduktion in co-production with Constantin Film Produktion and B. A. Produktion. ARRI Rental and ARRI Film & TV have developed, in close collaboration with Rat Pack Filmproduktion and Constantin Film, one of the most cutting-edge 3D workflows, and are providing the latest state-of-the-art technology and software, including support and personnel. Consequently, Rat Pack Filmproduktion can take full advantage of the entirety of these newly developed services on location. Preparations for the shoot began at the end of last year. Filming commenced on August 31, 2010, on sets in Bavaria (Walchensee, Deisenhofen, Burghausen, Bavaria Filmstudios) and Malta. The ARRI Film & TV on-set services trailer will travel with the production throughout.

The package includes four brand new ARRI ALEXA digital cameras, which record onto two Codex Portable Recorders, as well as the entire on-set 3D playback and viewing equipment. Two customized Stereotec midsize rigs, equipped with motorization, controls and data capture system from ARRI Rental, were created especially for this shoot. All relevant metadata needed later in postproduction will be saved on location and passed on directly to the on-set services trailer from ARRI Film & TV. For the various crane shots a Super Scorpio telescopic crane and a Supertechno 50 with a modified 3D remote head will be used.

ARRI Film & TV – Always On Board

ARRI Film & TV will deploy its postproduction to the set for the duration of the shoot. ARRI Film & TV’s onset services trailer is fully air-conditioned and offers enough space for several workstations, including a 65’’ 3D monitor, 2D broadcast monitor, grading panel and eight seats for screening purposes.

Two Codex lab stations are available in the trailer to receive the digital footage shot on set. Two ARRI Film & TV staff members are in charge of:

All of these tasks will be completed with the COLORFRONT on-set dailies software, which has been optimized for 3D shoots in close collaboration with ARRI and with the help of archiving software developed by ARRI.

To a great extent the metadata from the dailies grading and the stereoscopic parameters can be utilized later on during postproduction on the Lustre, as well as during the completion of the VFX work. The daily 3D screening will take place at the end of each day of shooting in the onset trailer. The entire digitally shot material will be shown with synchronized scratch sound, as well as with a stereo-geometrically and color-corrected image.