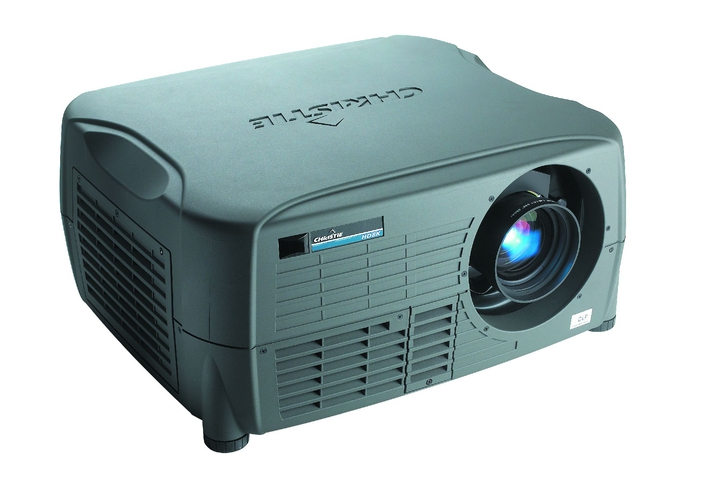 HD8K Projector from Christie
If you are planning to attend NAB 2010 with stereoscopic 3DTV in your sights, then Vizrt’s booth is the place to be. Not only will there be powerful, proven stereo 3D technology on display, visitors will also get a glimpse of real-time, stereoscopic 3D HD imagery. This stunning, novel stereo 3DTV experience will take place in Vizrt’s booth SL5408 at the 2010 National Association of Broadcasters show from April 10-15, 2010 in Las Vegas, NV.

The two Christie projectors will work in tandem to display the left and right eye perspectives that synthesize to form a true, credible stereo 3D effect when viewers watch it through special 3D glasses provided by INFITEC.

“The quality of our stereo 3D graphics projected on Christie’s projectors is unsurpassed,” says Gerhard Lang, Vizrt’s Chief Engineering Officer. “The HD8K projectors have true native HD resolution of 1920x1080. And they use Xenon illumination, which is the pinnacle of image color accuracy, and is needed for the filter technology provided by INFITEC. The output is the way stereoscopic 3D is meant to be viewed.”

The 3DS presentation will also include recorded material with overlaid graphics

Fuller adds: “We’re excited to support Vizrt’s virtual presentation at NAB with the highest quality projection to showcase its capability. From scientific visualization to 3D cinema and beyond to this next frontier, Christie looks forward to exciting new ways to engage audiences through great partnerships of capabilities such as this one.”

The content for the 3DS projected canvas will come from the Viz Virtual Set on the Vizrt booth. In addition to the feed from the virtual set, the 3DS presentation will also include recorded material with overlaid graphics and also full screen graphics.

Christie will present Vizrt graphics within its booth (#SL2005) at the NAB convention. Among the most prominent broadcast organizations producing content in stereoscopic 3DTV are: Sky Sports/UK, which is launching a dedicated stereo 3D channel later this year; the BBC and ESPN, both of which are providing some sporting events in stereo 3D in specially equipped cinemas.

Christie Digital Systems USA, Inc. is a global visual technologies company and is a wholly-owned subsidiary of Ushio, Inc., Japan, (JP:6925). Consistently setting the standards by being the first to market some of the world’s most advanced projectors and complete system displays, Christie is recognized as one of the most innovative visual technology companies in the world. From retail displays to Hollywood, mission critical command centers to classrooms and training simulators, Christie display solutions and projectors capture the attention of audiences around the world with dynamic and stunning images.

Vizrt's products are used by the world's leading broadcasters and publishing houses, including: CNN, CBS, Fox, the BBC, BSkyB, ITN, ZDF, Star TV, Network 18, TV Today, CCTV, NHK, The Globe and Mail, Times Online, The Telegraph, and Welt Online. Furthermore, many world-class production houses and corporate institutions such as the Stock Exchanges in New York and London use Vizrt systems.