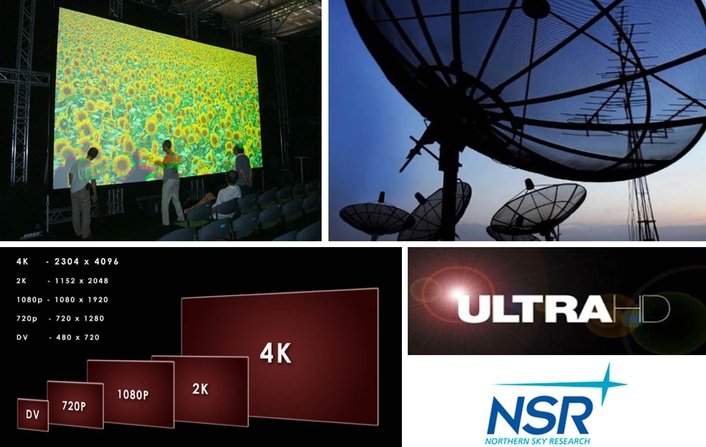 .
NSR's newly released UltraHD via Satellite finds, over the long term, UltraHD channels representing a respectable but niche opportunity for satellite companies. This nascent market is expected to start at a low base in 2015 with just 15 channels being demanded by the global cable TV, IPTV and DTH industries combined. The global satellite UltraHD market is expected to reach $412 million in 2025 from an $8.2 million revenue base in 2015.

With ROI metrics being volatile in the early part of the market cycle, the expectedly small niche that UltraHD is likely to serve lends to the pay TV industry’s slow adoption of this new video format. One of the major market restraints is the level of risk taking by service providers, which is key to ecosystem development. TV manufacturers are one of the first to ante up as UltraHD TV sets from major manufacturers like Sony, LG and Samsung are being unveiled. Content including movies and sporting events, as well as cameras to shoot UltraHD, are already available. 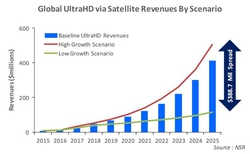 Also contributing to the ecosystem is the satellite industry via Eutelsat’s launch of a dedicated UltraHD channel to benefit the broadcasting chain. “However, real risk-taking has to come from TV content owners and service providers who will be delivering UltraHD to households. At this stage of the market cycle, there does not seem to be enough impetus towards substantial investments,” according to the study’s author Jose Del Rosario, Senior Analyst for NSR.

Over time, the market should begin to grow at higher levels; however, the percentage of UltraHD channels compared to SD and HD channels is expected to be a very small share. “Although regarded by some in the industry as potentially ‘the next big thing’ or the largest revenue driver for satellite communications, it is NSR’s view that UltraHD will be a small niche with minimal impact in revenues and channel carriage over the long term, relative to SD and HD growth,” notes Del Rosario. 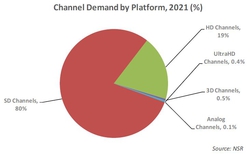 UltraHD via Satellite provides an honest assessment of revenue opportunities, and anticipates key issues, challenges as well as regional consumption patterns that are vital in qualitatively and quantitatively analyzing the value proposition of provisioning UltraHD as part of a pay-TV provider’s strategic offering.