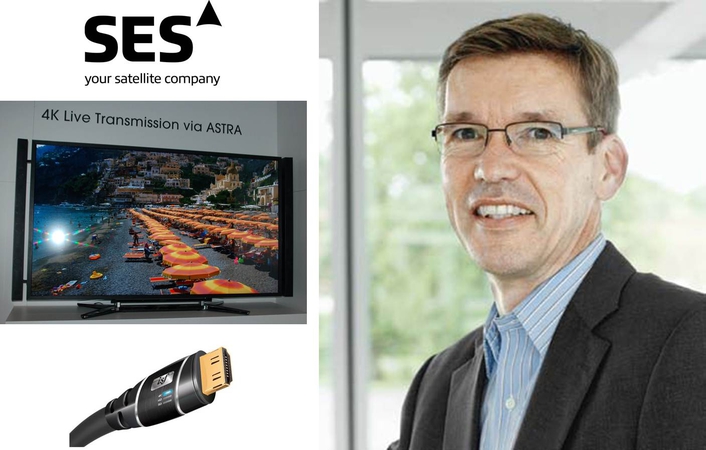 Wrede stressed how ready SES is with 4K/Ultra-HD
While there’s a sense of growing enthusiasm for 4K/Ultra-HDTV transmissions from equipment vendors, display manufacturers, satellite operators and perhaps even some well-heeled early adopters, some experts are urging caution while almost pleading for various industry elements to pull their fingers out in order not to disappoint the public.

Thomas Wrede, SES’ VP/Reception Systems, speaking on the margins of the huge Satellite 2013 show in Washington said that there was still a considerable amount of work to be done in the background. “SES is extremely serious about Ultra-HD, but we need an agreed standard for HDMI connectivity, for a start,” said Wrede.

“Work needs to be done with the Hollywood studios as to how we are going to secure their content and the High Definition Content Protocol (HDCP) standard needs updating. And all this before silicon has been laid down. It is true that work is being done by some silicon chip suppliers but much more work needs to be done. For example, we want to start demonstrating Ultra-HD programming at the point-of-sale but again what hardware can we use, what HDMI interface can we use?”

Wrede stressed how ready SES was with 4K/Ultra-HD, including preparing a test channel with specially shot material (mostly captured in Barcelona recently) but said the next few months, and certainly the period leading up to IBC in September, would be crucial. He was additionally looking forward to seeing what the encoder and compression specialists would be showcasing at NAB and IBC, given their importance to the whole transmission process.

Ultra-HD: 135 channels by 2017
Ultra HDTV, the ‘next generation’ broadcasting standard should see test channels to be launched this year, says Credit Suisse in a report for clients.

The investment bank, which used its report to examine the state of health of Europe’s satellite industry, said the 3840 x 2160 pixel transmissions (8.3 megapixels) were good news for satellite operators in that it would lead to a greater demand on satellite bandwidth. It could also lead to greater demand from the pay-TV industry which is expected to lead the adoption of the new broadcasting technology.

Japan will launch a 4K Satellite Channel in 2014

The bank says that the roll-out, and take-up, of Ultra-HD is likely to be speedier than that of HDTV. “In the early 2000s when HDTV was launched,” says the bank’s report, “a lot of consumers were still watching analogue TV. Analogue customers cannot watch HDTV, even if they have an HDTV set, which reduced customer uptake and the initial willingness among broadcasters to invest in HDTV. We believe all SD customers will be able to add Ultra HD programming if they have an Ultra HDTV set in the same way as they can currently watch HDTV programming.”

“The replacement cycle of TV sets is now around 6 years, shorter than the 10 year replacement cycle when HDTV was launched at the end of 1990s/in the early 2000s; this could drive a quicker uptake as the penetration of Ultra HDTV sets of households will be quicker.”