UEFA CL Final in 3D by TV3: In Cinemas and on TV 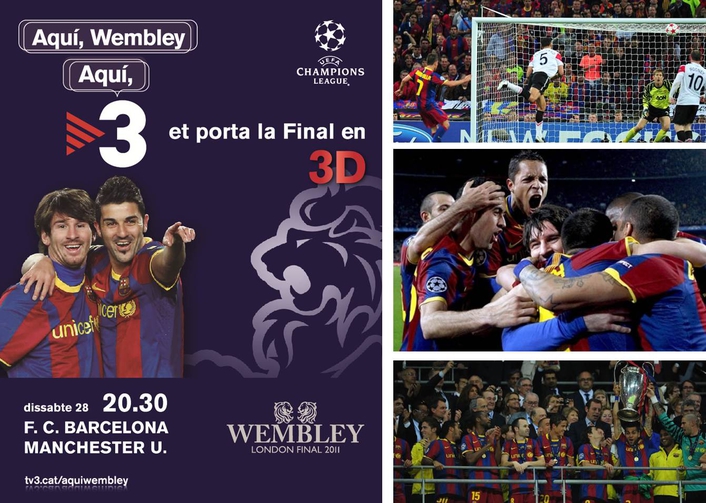 The football match between Barça and Manchester United had a great following, also in the cinemas across Catalonia
More than 5,000 people watched the Champions League final match in 3D at the cinema, in a unique and pioneering initiative taken by TV3 to cinemas across Catalonia. A total of 22 cinemas in 17 cities offered the only 3D images of Barça’s victory that were available in Spain, in a broadcast by TV3 and by TV3HD channels in parallel to that of television. Six cinemas in Barcelona city, as well as cinemas in Mataró, Terrassa, Gavà, L’Hospitalet and Badalona sold out all available tickets. Overall, 75% of seating space in all cinemas that broadcast the match in 3D was filled.

Through this new 3D initiative, TV3 reasserts its pioneering commitment to the new broadcast and production formats. In fact it broadcasted the final match in all currently existing formats – standard, HD with Dolby Digital sound, and in 3D. This is the third occasion in which TV3 distributes the 3D signal of Champions League matches. The first was the 2010 final held at Spanish Bernabeu Stadium – on that occasion, TV3 produced the HD signal for the whole world and in 3D for the first time for an event of such magnitude. The second occasion was the first-leg match of the Champions semi-finals of that same year between Madrid and Barcelona. But Saturday’s final was the first to reach cinemas across the whole of Catalonia as well.