TV3 to distribute the Champions League final match in 3D 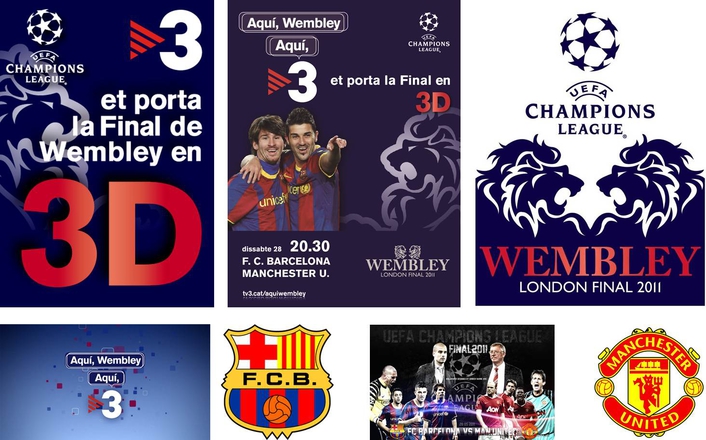 More than 7,500 people shall watch the match Barça - Manchester in stereoscopic format at 23 cinemas in 18 Catalan cities
TV3 is to distribute the 3D Champions League final match of 28 May between FC Barcelona and Manchester United to cinemas across the whole of Catalonia. More than 7,500 people shall have the chance to watch live the final practically as if they were seating at Wembley stadium – a unique and pioneering experience to be taken by TV3 to 23 cinemas in 18 cities, in a broadcast by TV3 and by TV3HD channels in parallel to that of television.

The images of the London final will be distributed by TV3 to Catalan cinemas will be produced by British operator BSkyB and will be the only 3D images available in Spain. They will have their own production, different to those in 2D to be broadcast by television. They will rely on 24 additional cameras that will offer 12 specific three-dimensional positions to take the greatest advantage of depth. Thus the spectacular nature of the stereoscopic format shall be enhanced, offering an experience as close as possible to that of watching the final at the stadium.

Through this new 3D initiative, TV3 reasserts its pioneering commitment to the new broadcast and production formats. In fact it shall broadcast the final match in all currently existing formats – standard, HD with Dolby Digital sound, and in 3D. This is the third occasion in which TV3 distributes the 3D signal of Champions League matches. The first was the 2010 final held at Spanish Bernabeu Stadium – on that occasion, TV3 produced the HD signal for the whole world and in 3D for the first time for an event of such magnitude. The second occasion was the first-leg match of the Champions semi-finals of that same year between Madrid and Barcelona.

Televisió de Catalunya's 3D broadcasts are carried out using the side-by-side technology – one of the best known internationally. This technique sends two sets of images to the same channel, one set for the right eye and another set for the left. The result on a TV set not adapted to 3D would be a screen split into two sets of apparently identical images. But on a TV set customised for this type of broadcasts and using the right pair of lenses, by means of this technique the brain adds up the two sets of images and can experience a feeling of three-dimensionality on a flat surface.