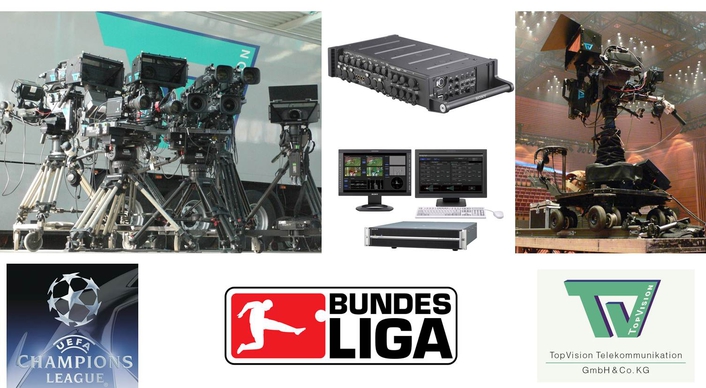 “Our first steps into the third Dimension were very instructive and we have learned a lot since our first 3D production which was the UEFA champions league match VFB Stuttgart – FC Barcelona in February 2010”, remembered Eduard Palasan, Managing Director of TopVision Telecommunikation GmbH and Co. KG. “We were courageous, have invested and tested a lot, and have improved our 3D workflows continuously and to finally position us as one of the top 3D production companies in Europe. Our longstanding cooperation with the leading 3D specialist Sony Professional has paid off. The 3D technology bits and pieces are perfectly harmonized, we work efficiently and the quality of our 3D productions is more than convincing.”

Since the second round of the `Bundesliga´ season 2010/2011 TopVision produces one match of every match day in 3D. The equipment consist mainly of Sony HDC-1500R cameras, Element Technica 3D rigs, 3D enabled HDCU-1000 camera control units, HD-1200 chip cameras from LMP and MPE-200 3D processor boxes, HDCAM SR VTRs and MVS-8000 vision switchers from Sony as well as XT2 servers from EVS. All the equipment provides TopVision with sufficient bandwidth to produce 3D signals in 2x 1080i or a 3G signal in 1080p.

Another centerpiece of the 3D workflow optimization is the Sony HDFA-200 box. It combines the two HD signals of a HDC-1500R camera pair including metadata, return signal, intercom, rig commands and power onto just one fiber cable and transfers the signals to the 3D OBVan where the signals are analyzed and optimized via the MPE-200 processor box. The implementation of the new RCP software allows the shading operators to control one 3D camera pair via one RCP-1500 remote control panel in the same way as they are used to control one camera – this facilitates the 3D production further.

“The HDFA-200 shows its workflow enhancements already during the set-up of the 3D equipment, because only one cable has to be laid to the 3D camera pairs,” explained Ralf Zuleger, key account manager at Sony Professional. Together with Andreas Berghaus, product manager live production and the Sony service team lead by Bernd Rauch, he has supported TopVision in selecting the right equipment for the 3D productions. “The deployment of the MPE-200 box makes the 3D production considerably leaner and more efficient because Topvision needs less staff and can set up the 3D production equipment in less time,” Zuleger concluded.