Top Match of the Week with TopVision's Dedicated 3D OBVan 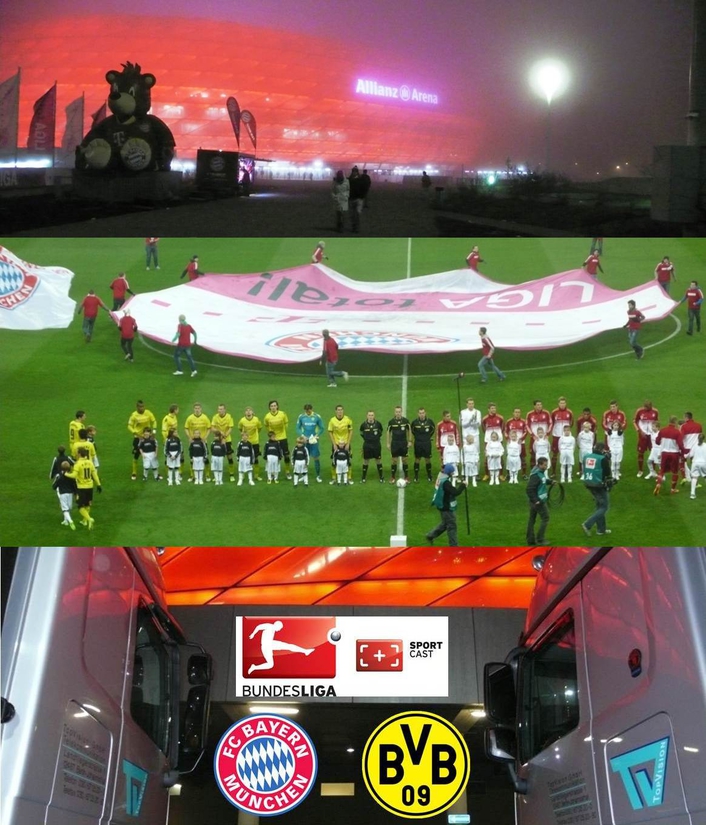 The German Bundesliga has achieved the next evolutionary step towards 3D coverage in a multi-platform distribution world
Borussia Dortmund opened up the Bundesliga title race by beating leaders Bayern Munich 1-0 at the Allianz Arena to reduce the deficit at the top of the table to two points, on a weekend of despair in Germany. A goal from Mario Gotze early in the second half was enough to inflict a second home defeat on Bayern, who lost by the same scoreline to Borussia Monchengladbach on the opening day of the season. Both Dortmund and Gladbach are now Bayern's closest challengers in the table with just two points separating the Bavarians from the two Westphalian sides with four games to go before the winter break.

All the excitement of the action in the Allianz Arena was covered in 3D by TopVision’s dedicated 3D OBVan featuring some outstanding new gear: the MVS-7000X vision switcher from Sony, the XT3 server from EVS and the BIRDY 5:0 from SKKran in combination with LMP’s HD:1200 cameras on an LMP 3D rig with the related two Multi-X 3D universal 3D video processors mounted on the BIRDY. 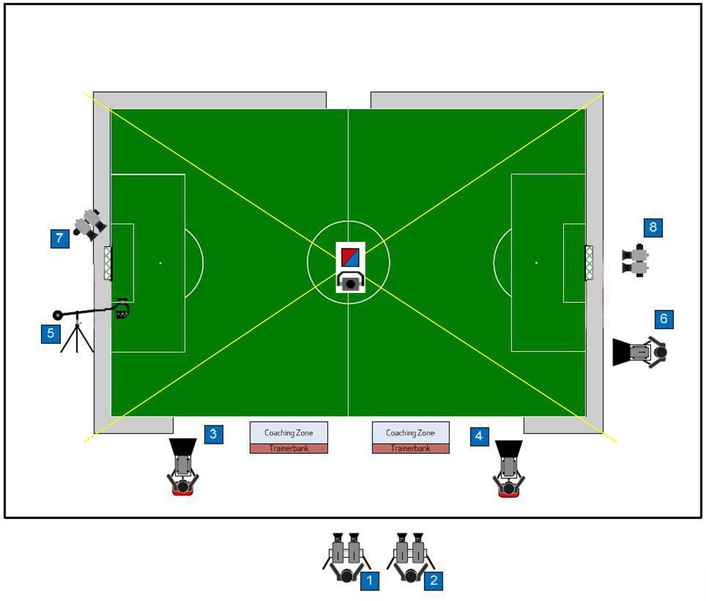 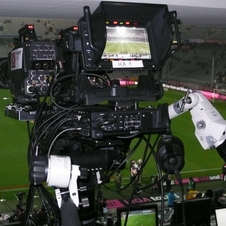 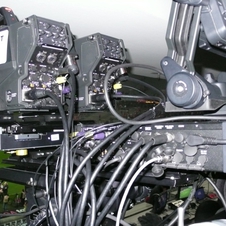 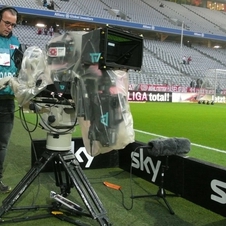 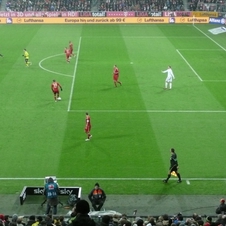 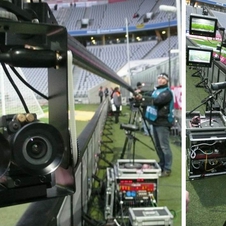 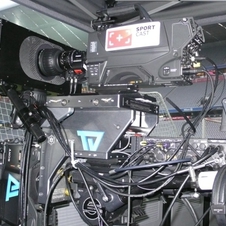 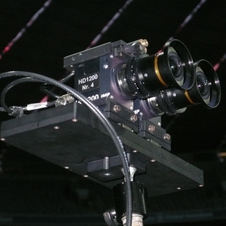 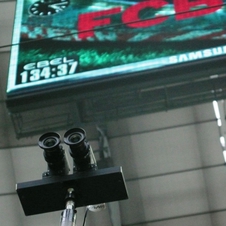 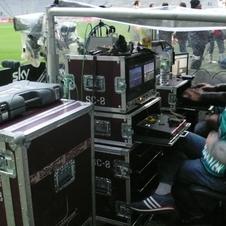 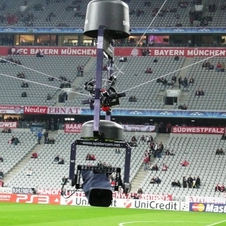 The 3D production setup in detail: Camera pairs #1 and #2 were Sony HDC-1500’s mounted on side-by-side rigs from 3ality Technica and positioned high next to the traditional HD camera platforms. Camera pairs #3 and #4 consisted also of two HDC-1500’s mounted on an 3ality Technica “Quasar” mirror rigs. Camera pair #5 was the BIRDY 5:0 with the LMP side-by-side rig and two LMP HD:1200 chip cameras. Camera pair #6 (again two HDC-1500’s) was setup in the same way as camera pairs #3 and #4 on a 3ality Technica “Quasar” mirror rig. The “behind the goal” pairs #7 and #8 were made up of HD:1200 mini cameras fixed on side-by-side rigs from LMP. The left and the right eye camera signals from all the 3ality Technica rigs were fed into Sony’s fiber optic video transceiver HDFA-200 and send together with the camera, lens and rig control data via one optical fiber cable to eight Sony MPE-200 production processors located in TopVision’s 3D OBVan. All theHDC-1500 cameras were equipped with Canon clutch-less zoom lenses and the rigs were mounted on Sachtler tripods. 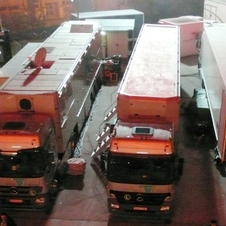 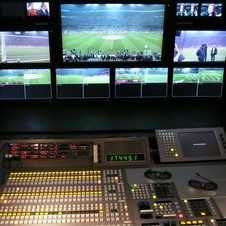 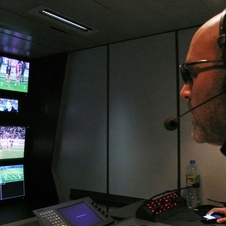 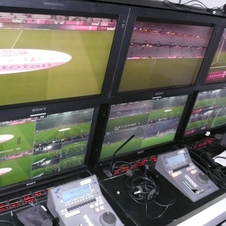 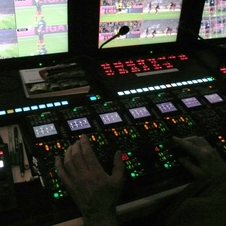 The camera signals were mixed on the MVS-7000X from Sony and recorded on the EVS LSM network for SloMo playback. For communication purposes a Riedel Artist system is on board.

The 3D convergence area is integrated in the related tender truck. Here stereographer Richard Hingley together with five convergence engineers to ensure a quality experience for the viewers. After more than one and a half year of 3D experience – TopVision produced its first 3D match (VFB Stuttgart – FC Barcelona) on 23 February 2010 – the current 3D production concept is based on some straight forward guidelines:

• Longer duration shots
• Longer duration replays
• The Z axis is used to choose replay angles and live shots
• Lateral movement has to be avoided
• The cut has not be forced
• Shots have to be composed to include foreground and background layers to provide depth.

With this in mind the cameras are framing wider to avoid forcing cut, panning, and zooming. Also less replays are used during the matches. With this in mind the Sportcast/TopVision 3D productions of the German Bundesliga have achieved the next evolutionary step towards 3D coverage in a multi-platform distribution world. 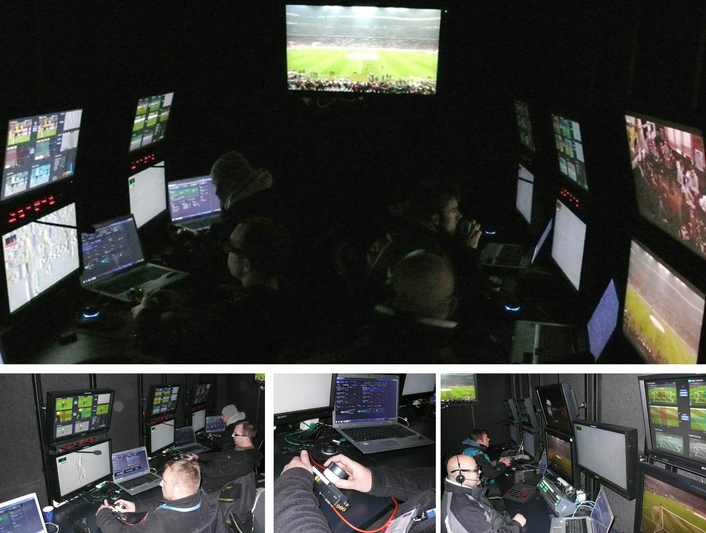