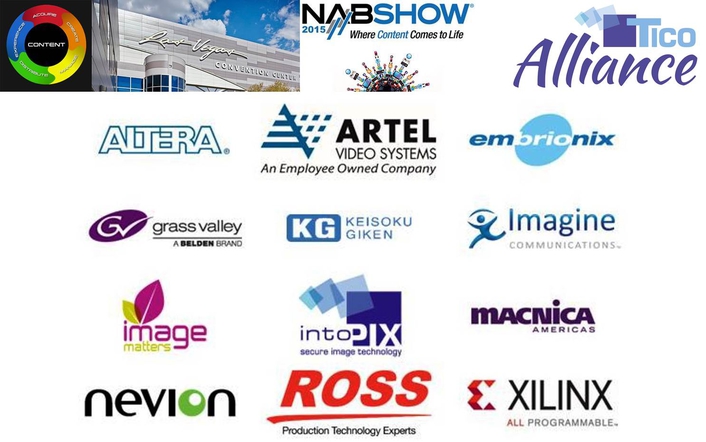 The new TICO® compression technology will ease the challenge of moving 4K/UHD over current SDI infrastructure and IP Networks
Leading Broadcast equipment manufacturers, OEM providers, broadcasters, electronics brands and technology companies announced today the launch of the TICO Alliance. TICO is a new lightweight compression technology, which enables 4K/UHD to be transported over legacy SDI infrastructure and modern IP production and contribution networks. TICO has been developed by intoPIX and work is now ongoing at the SMPTE to publish TICO as Registered Disclosure Document (RDD) for the benefit of the entire broadcast and media industry.

The alliance is a coalition of companies united to set the bar for next generation infrastructure by establishing TICO in the new IP-based Live production ecosystem that allows to seamless update and upgrade the existing SDI-based workflows. The group is created to ease 4K/UHD adoption over the current SDI and the new IP-based infrastructures.

Benefits of TICO compression for UHD, SDI-based and IP Live Production
To support transportation of UHDTV streams across the IP network or the existing 3G-SDI infrastructure, a new smart, fast and light compression is needed. 10 GB Ethernet or 3G-SDI networks are widely deployed and operated cost effectively within the Broadcast landscape.

TICO will help Broadcasters to fully benefit from a seamless, integrated and high-quality Ultra-HD ecosystem from end-to-end. With a visually lossless compression up to 4:1, TICO enables the mapping of a single 4K/UHD 2160p60 stream over a single 3G-SDI link. Over 10Gbps Ethernet, it allows the simultaneous transmission of up to 3 streams of 4K/UHD 2160p60.

TICO provides an extremely low latency (limited to just a few pixel lines), preserves video quality across multiple generations of encoding/decoding, fits into the smallest cost effective FPGA devices and runs efficiently in software. This technology is designed to enhance live IP systems by increasing efficiency and reducing cost for both HD and 4K/UHD video.

First step toward standardization and adoption
In December 2014, intoPIX announced the creation of a Registered Disclosure Document (RDD) at SMPTE. This will ease the integration process of all new adopters and supporters of the TICO compression and shares recommendations to map 4K/UHD TICO streams over 3G-SDI or IP Networked infrastructures. The members of the TICO alliance are closely collaborating with intoPIX on the SMPTE RDD draft document.TICO Alliance.

Altera: Umar Mughal, Director Broadcast Business Unit: “As the Broadcast industry moves to Ultra HD with higher resolutions, higher frame rates, and better pixels delivering an overall better quality experience to customers, Broadcasters are faced with the challenge of getting more data through the same or limited transportation connections. Our customers are now able to implement TICO to allow them to quickly upgrade their products without needing to change existing infrastructures and meet the needs of the next generation video needs. There is also added benefit of visually lossless compression to reduce overall ecosystem costs including the reduction of external memory bandwidth needs.”

Artel Video Systems: Richard Dellacanonica, President: “The transition to 4K UHD is inevitable and with it comes significant technical challenges related to transporting it uncompressed. Standard fiber and IP infrastructures designed to handle such large data requirements cost effectively currently do not exist, thus in most cases mezzanine compression will be required. TICO, with its low overhead, latency, and virtually losses quality, is the ideal compression format for that application and we are pleased to be involved with the consortium.”

Embrionix : ‘’In our changing market, a variety of formats will be available and used in production environments. Embrionix is pleased to collaborate in the TICO consortium to allow SFP, SFP+ based products to support TICO in addition to other transport formats without the major investment cost of a new infrastructure. The emSFP with TICO codec will enable seamless path to IP and to UHDTV integration.’’

Grass Valley, a Belden Brand - Charles Meyer, CTO Production: “Our company sees the advantage of TICO for live production environments. The UHDTV roadmap calls for ever increasing data rates. TICO allows us to provide our customers infrastructure scalability for the next decade while simultaneously reducing latency to imperceptible levels.”

Image Matters – Jean-François Nivart CTO: “TICO has a great future! With a typical compression ratio up to 4:1, TICO fills the gap between improved video quality expectations and actual data transport links! It perfectly completes the image compression technology range. The efficient MPEG standards compress images with ratios higher than 30 to 1 to cast them to the end-viewer. The high quality JPEG 2000 standard is used in DCP and IMF with compression ratio between 8 and 30 to 1 to protect the viewer experience and preserve image quality for future generations. TICO offers a new and efficient implementation to carry the highest video data throughput on local production and post-production network. It keeps the quality through Ethernet and SDI. It enables easy implementation on CPU, GPU and FPGA. Image Matters will be proud to support the TICO with its IM-X product range enabling OEMs for a fast and easy UHD adoption.”

Imagine Communications - Steve Reynolds, CTO “Imagine Communications is focused on enabling 4K/UHD for our customers. We see both 3G SDI and 10GbE as essential parts of that ecosystem and we are fully supportive of the TICO initiative. Collaboration among industry leaders in establishing universal standards is critical as we address the challenges of moving the industry towards live production of 4K/UHD.”

Keisoku Giken : "TICO is the superior technology which will overturn the common sense of the relation between beautiful images and the bandwidth."

Macnica Americas – Marc Levy, CTO : “TICO compression is a very exciting product, and the answer to transporting UHD live video over the same network infrastructure as HD or 3G live video with minimal impact on the gate count and latency, and no impact on visual quality. We are actively integrating TICO into our SMPTE 2022 High Bit Rate Video transport solution, and expect TICO to become an integral part of high-bit rate video transport for many years to come.”

Nevion - Johnny Dolvik, Chief Product and Development Officer says: "The move to UHD for content production and distribution, with higher resolution, higher frame rates, and higher dynamic range, represents another large step change of increased bandwidth and processing requirements. At the same time, the industry is trying to do more with less; putting content on new distribution channels while reducing production cost. This is where TICO lightweight compression will come to the rescue, allowing broadcasters and content producers to take advantage of these new exiting formats in live production, engaging audiences in a new way, while still keeping the data rates for UHD signals below 10G. This is important because it will mean we can take full advantage of the commoditization and cost-savings of 3G-SDI uncompressed video links, 10G Ethernet and IP networking.”

Ross Video - Troy English, CTO: “TICO offers a great compromise between quality, bit rate and size to implement. We are actively evaluating it for potential future applications in live production. Ross Video likes to get on board and encourage interoperable solutions like TICO.”

About the TICO Alliance at NABShow2015
The show is taking place at the Las Vegas Convention Center, April 13 through 16. Several demos using TICO are organized by the Alliance supporters including Altera, Grass Valley, Imagine Communications, intoPIX, Nevion, Macnica Americas and Xilinx, leveraging 4K/UHD over 10GbE IP Networks or 3G-SDI infrastructure.
intoPIX, the provider of TICO technology, is showing the FPGA IP-cores implementations combined with the SMPTE 2022 IP transport standard with 3G-SDI mapping with partners such as Altera, Macnica Americas and Xilinx. Based on the TICO compression technology, intoPIX has released first 4K/UHD 60P TICO codecs running on FPGA and real-time CPU, designed to address the move of the Broadcast industry towards a fully networked IP ecosystem.
More intoPIX FPGA & Software product releases are scheduled for release after the show, during Q2 & Q3 of 2015.