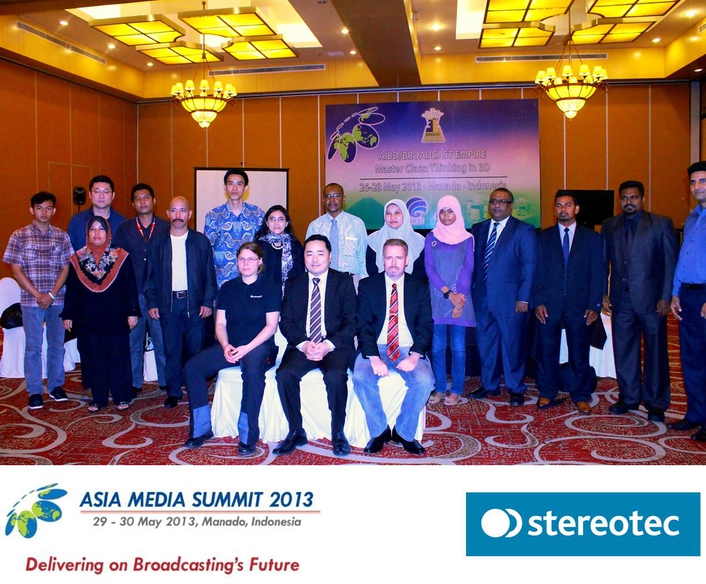 The Asia Media Summit (AMS) 2013 was organized by Asia-Pacific Institute for Broadcasting Development (AIBD) and hosted by the Ministry of Communication and Information Technology (MCIT) together with Provincial and Local Governments. The AIBD is a large regional inter-governmental organization. It was established in 1977 and currently has 43 member organizations in 26 member countries. The Summit expects to gather about 500 top-ranking broadcasters, decision makers, media professionals, regulators, scholars, and stakeholders from within and outside Asia Pacific area to examine what the future holds for broadcasters in a region.

STEREOTEC held the pre-summit “Think in 3D” Master Class which was designed to convey the 3D philosophy to the partakers".  The multinational participants ranged from Directors, Cinematographers and Broadcast Production. The Aim of the workshop was to encourage the exploration and integration of this new medium into the process of visual storytelling. The Stereographer Sarah Rotter who has worked on large international S3D Productions such as "Hansel & Gretel: Witch Hunters", “Wickie And The Treasure of The Gods”, “Hypenation 3D”, alongside with Florian Maier founder of Stereoscopic Technologies GmbH designed the pre-summit workshop.

The Workshop was used to express the theoretical fundamental knowledge concerning 3D, perceptual psychology, Optics, Recording and reproduction technology. This was achieved by using 3D Film and Pictures examples, and “Making of” Material. In addition the ground rule of 3-D Content Creation “Do not hurt your audience” (resulting from lacking quality standard causing 3D motion Sickness) was explored. Furthermore an opportunity to develop practical experience of the deployment of 3D Content Creation was achieved by Hands-on approach. STEREOTEC Nano Rig in combination with the Cunima’s was used to film live motives to demonstrate the effects of various 3D Parameter settings.

STEREOTEC is a leading 3D rig manufacturer and one of the most innovative service providers for stereoscopic film production.

Capturing 3D and 2D at the Same Time