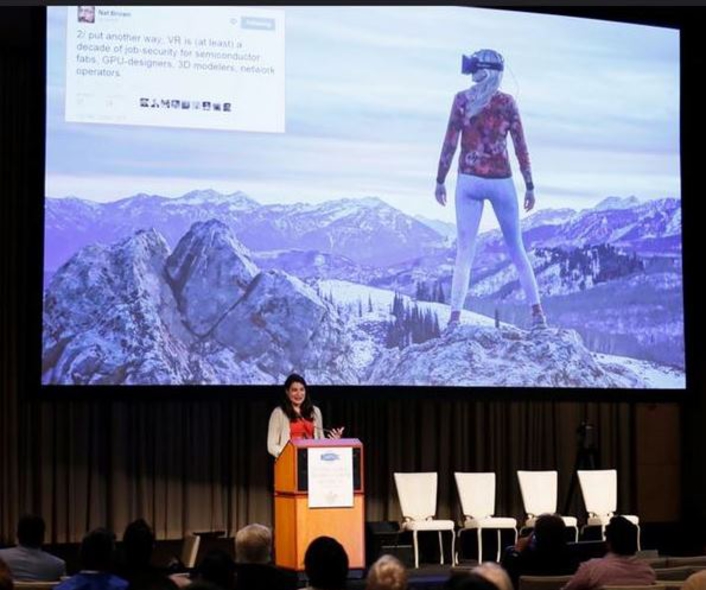 While VR (virtual reality) has gxhdfgsdgdfgsdfg VR and augmented reality, as well as mixed reality in media and entertainment.

2015 hasn’t exactly been a blockbuster film release year but SMPTE (Society of Motion Picture and Television Engineers) 2015 Symposium attendees are eternally optimistic that tomorrow’s releases will be richer, better and there will be more.

Job Security – SMPTE keynoter Layla Mah, lead architect for VR and advanced rendering at AMD and the creator of the company's LiquidVR technology, set the tone for the VR/AR/MR in film session by emphasizing that the technology had a lot of potential, and except for special applications, was years away from delivering money-making visual experiences for the M&E industry.

Layla Mah, lead architect for VR and advanced rendering at AMD and the creator of the company's LiquidVR technology, started the opening Symposium session by emphasizing that the technology is still in the very early stages for M&E and that there are a lot of hurdles yet to be overcome before it will be in worldwide release.

One of the slides in Mah’s presentation said it best,“VR is (at least) a decade of Dxxxx xxz  żxx  semiconductor fabs, GPU designers, 3D modelers, network operators.”

Obviously, studios will want to move the adoption more quickly to help their bottom lines.

While the demonstrations at the conference all centered on the various versions of the goggles gamers are accustomed to, her vision of tomorrow was immersive technology that could be an untethered experience using something between a contact lens and a pair of regular glasses.

There are a lot of advances that are nezvkhzjdsrilafkjfnvzb.kzxf;gjhaspouroua an unbelievable volume of entertainment storage.

Drawing researchers from across their organization, Samsung demonstrated/discussed an array of hardware and software approaches they are taking to submerge us in the virtual world-- completely disconnected from our actual environment.

To show how much agreement people have in the technology, each of the Samsung speakers had his own pet acronym – VR, AR, MR.

Relating their research to the film industry, Sajid Sadi, Tech Lead and Senior Director of Research, Think Tank Team, said their technology is more than just a research curiosity but is still about at the 8mm film stage of entertainment.  They are exploring how people shoot and use cameras, the length of their takes and editing as well as focusing the viewer’s attention  and physical/mental responses.

All of the speakers warned that moving ahead too quickly would only put immersive technology/application on the same path as 3D, which has been invented at least four times in my lifetime. 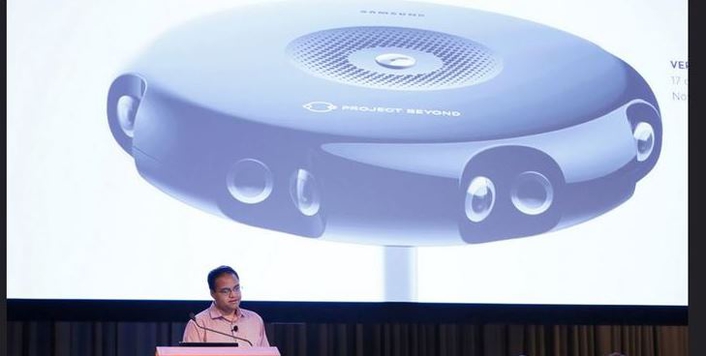 Early Stages – The Samsung technology session discussed the various tools and applications that are being developed for the M&E industry.  The researchers showed and demonstrated one of their initial camera units which are “good enough” for some projects but certainly not something that every filmmaker will have to or want to buy and use tomorrow.

Perhaps Sadi said it best, “Our camera isn’t there yet but it is useable for some filming.”
We’re personally more interested in the continual use of the technology and if it can be in the form of a contact lens or an “ordinary” pair of glasses; rather than, as one speaker envisioned, an individual wearing one of the headsets while you’re walking around and seeing monsters, creating virtual graffiti or encountering friends.

Somehow, that idea failed for Google Glass, but maybe it will be so compelling people will want to live in a combined virtual/real world rather than in the here and now …. Gawd, hope not!

One of the most asked (and unanswered) questions of the first day was “Is VR a New Art Form?”

In fact, perhaps the most interesting panel session of the day covered the subject with idea leaders from business, the industry and education. 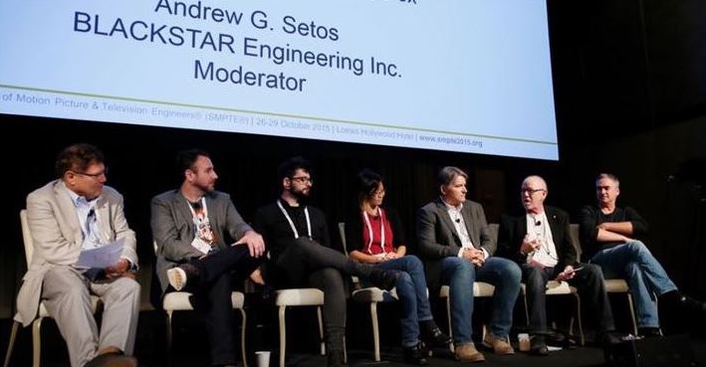 Art Form – Filmmakers and academics each had their own definition of the new technology, where it fit in the industry and when it would really arrive.  Andrew Setos (L), of Blackstar, moderated the session with panel discussions by (l-r) Paul Bettner, Playful; Colin Foran, HBO; Vicki Lau, visual effects artist; Cliff Plumer, Jaunt Studios; Steven Poster, International Cinematographers Guild; and Ted Schilowitz, 20th Century Fox.

Speakers spent a lot of time warning the M&E industry not to rush the technology to people’s screens, saying they didn’t want “their” technology to suffer the same fate as 3D (resurrected every 5-10 years) or having herds of glasstonauts roaming the streets.

Several of the speakers noted that VR/AR/MR interact with individuals in totally different ways and they admitted they believe that more study has to be done on how it interacts with and impacts the mind, ears, eyes and body.

Pete Moss, whose self-chosen title VR Dude and Lead Engineer at Creative Content Studio of Unity Technologies, noted that ultimately, the technology will anchor people in the real world and provide simulation of alternative worlds/experiences and added, "Sorry Hollywood, but 360 video is not VR."

The speakers said visual storytellers had to think differently without giving them many guidelines during the session other than they had to take into consideration the total person.

While the VR/AR/MR experts are still learning how they can apply their technology to visual storytelling, that certainly hasn’t stopped filmmakers from using it to tell their stories.

Samsung and 20th Century Fox demonstrated one of their latest goggle-attached “films” and most of the people who gave it a try thought it was different and interesting but felt that a lot of trial and error work will be done before it goes primetime. 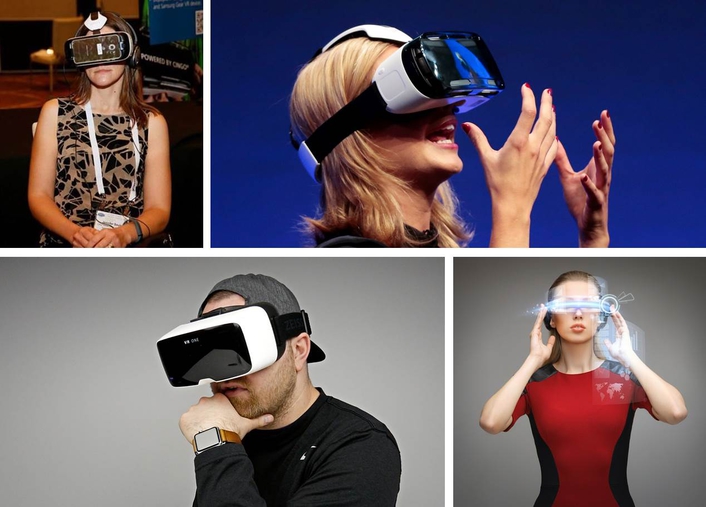 Is Seeing Believing? – Jen Soule, president of OWC, donned the goggles to experience (not certain you can say watch) 20th Century Fox’s VR demonstration film.  Most of the SMPTE attendees took their turn to don the goggles to see the story unfold.

One thing is for certain; cinematographers, animators and VFX artists will have to learn a whole new set of skills to help ordinary folks live in and around the two environments--especially without the dumb goggles.

They’re great for gaming, taking a quick trip to some exotic location by yourself, real estate tours, medical “practice” and things like that. But no one could tell me what would happen if I was attacked by zombies, thrust into the middle of a battle, in a car accident or fell a couple of hundred feet in the VR/AR/MR world.