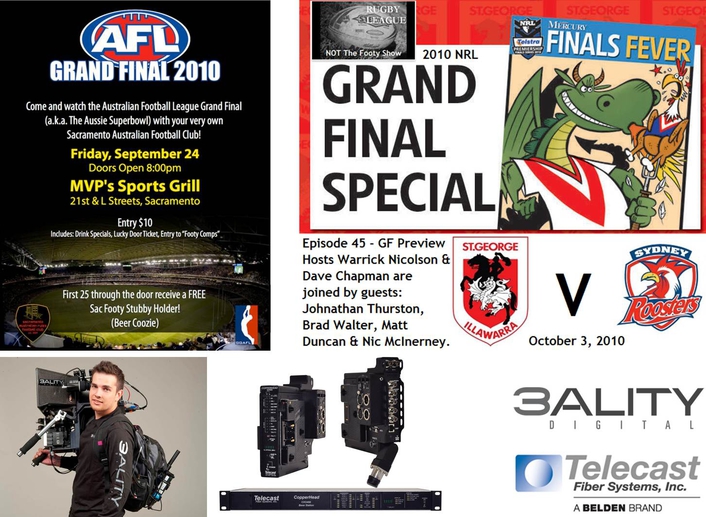 "With the CopperHead 3400, we can multiplex all of the many signals from our 3D rigs onto a single two-fiber hybrid cable. It's pretty unheard of to find a solution that can multiplex so many packets onto a single fiber pair, but that's the big advantage of the Telecast gear — it allows us to do more with fewer fibers and fewer cables," said Matt Battaglia, chief engineer for 3ality Digital. "We have always relied on Telecast Fiber Systems for our fiber optic connectivity needs because they understand broadcasting and broadcasters. With the CopperHead 3400, they have delivered a one-of-a-kind product that's uniquely addressing an important niche in the marketplace."

For coverage of both events, 3ality Digital supplied its new TS5 handheld 3D rigs equipped with the CopperHead 3400 transceivers to its client, OB truck company Global Television, who in turn provided production services for Australia's Channel 7 and the Nine Network. The first product of its kind to mount directly onto a dual-camera 3D rig, the CopperHead 3400 transported the two uncompressed HD camera signals from the rig's dual Sony HDC-P1 cameras, as well as enabled full control of those cameras and the 3D rig's interocular and convergence operations, all to and from the truck. The CopperHead also delivered the other signals required for production, including return HD/SDI, genlock, intercom, tally, and audio signals, as well as power to the entire rig, including motors, cameras, and viewfinder — all over a standard SMPTE hybrid cable.

"3ality Digital's 3D camera platforms and technologies have a well-deserved reputation for delivering top quality stereoscopic images for broadcasters, production companies, and studios," said Jim Hurwitz, director of product management for Telecast Fiber Systems. "3ality Digital's use of the CopperHead 3400 for the Australian sports events was a great demonstration of how fiber optic technology can be used to make sophisticated 3D cameras easier to deploy and operate, and Telecast is proud to have been able to provide this solution for these groundbreaking broadcasts."