.
Five Skquattro pedestals and a wide range of additional support equipment have  supplied by The Camera Store (TCS) for a live stereoscopic broadcast of Tchaikovsky's Swan Lake from St Petersburg.

Starring Yekaterina Kondaurova, the Swan Lake 3D Live Special Event will be relayed on Thursday 6 June from the Mariinsky Theatre to cinema audiences in more than 50 countries around the world. It will also be screened in the newly opened Mariinsky 2 auditorium. Many seats in the theatre will be moved to make room for eight large 3D camera rigs. Two of the Skquattro pedestals will be on tracks on the far left and right and three more will be in the body of the stalls, as will a MovieBird crane to capture movement of the Mariinsky dancers from very high angles. Another camera rig will be in the orchestra pit trained on the conductor and artistic director Valery Gergiev.

The 3D event will be produced by London-based Glass Slipper.

Find a Cinema near you and book a ticket here

"We will be using three static and two tracking TCS Skquattro pedestals for the live relay," comments camera operator David Gopsill. "They enable us to achieve the stable imaging essential for 3D cinema audiences while retaining the freedom to vary camera height and lateral position throughout the live performance. Each pedestal will be fitted with stereo-paired Sony HDC-P1 cameras operating in 1920 x 1080 high definition. We were initially asked to source the grip equipment locally but nothing was available that could match the versatility of the Skquattro. We have also brought in from TCS a Vinten OB Quattro, eight Vinten Vector 750 pan and tilt heads, plus a Vector 430. These will support cameras delivering video from various angles."

Developed by TCS from the Vinten Quattro pedestal, the Skquattro gives camera operators the ability to deliver low and high angle shots while moving laterally along a track. The pedestal supports a camera and viewfinder combination weighing up to 100 kilogrammes and allows up to 99 centimetres of 'on-shot' elevation adjustment. Originated in 2010 for use in the restricted area of a theatre, the Skquattro is now used on some of the largest productions in British television. 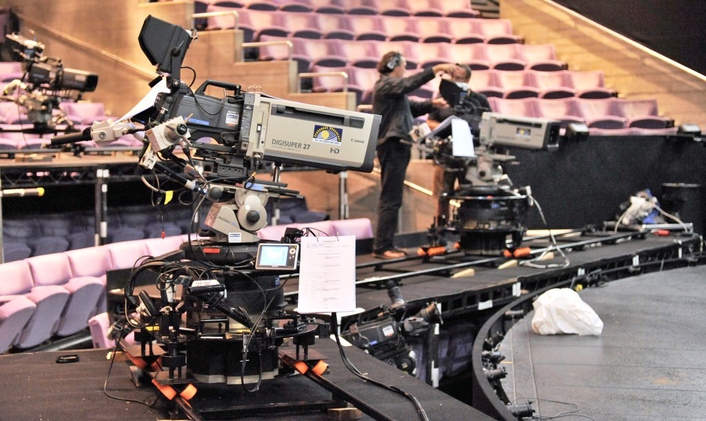 Opened in 1860, the Mariinsky Theatre became the pre-eminent music theatre of late 19th century Russia, where many of the stage masterpieces of Tchaikovsky, Mussorgsky, and Rimsky-Korsakov were first performed. Through most of the Soviet era, it was known as the Kirov Theatre. Today, the theatre is home to the Mariinsky Ballet, Mariinsky Opera and Mariinsky Orchestra. Since Yuri Temirkanov's retirement in 1988, the conductor and artistic director Valery Gergiev has served as the theatre's general director. The new building, opened in May, is located opposite the 19th century original.

Established in 1996 and based in West London, The Camera Store (a Vitec Group company) draws on many years of experience as television cameramen to guide clients in their choice of equipment. It has a large stock of standard equipment, including pedestals, tripods, heads, crane arms, lighting, fibre-optic cable and camera-support accessories. The Camera Store offers a countrywide rapid response delivery and collection service embracing large or small items. It is always ready to meet the challenge of improving existing kit or developing new production tools.