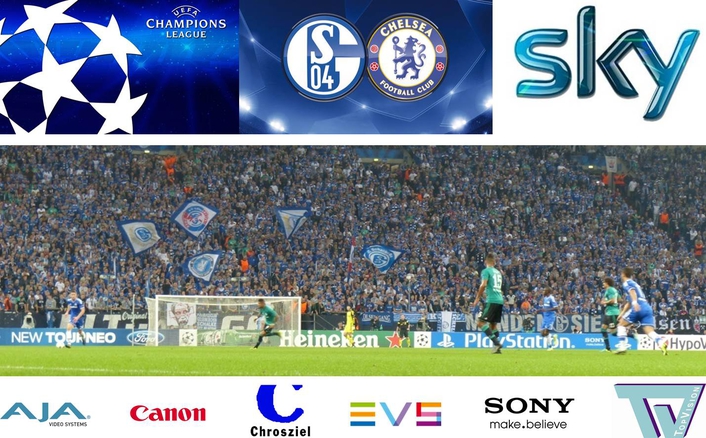 .
For any television innovation, the main driver is always sport. If it allows you to create better, clearer, more engaging sports coverage then the innovation has a good chance of succeeding in the consumer marketplace.

Sport on television has developed dramatically over the last decade, with a clearly established language. It depends on large numbers of cameras, and importantly on multiple replays from those cameras. Sports fans expect to see key action points from different angles and at different speeds, to understand what happened and to appreciate the skills involved. 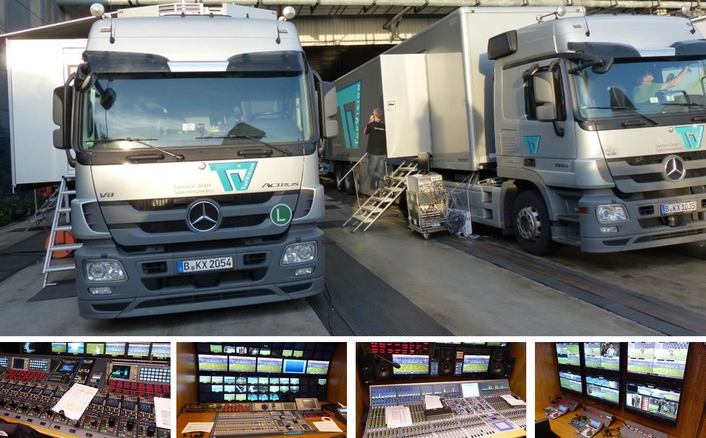 The RCP for the Sony F55 was operated as any other RCP on board of the TopVision HD Ü5.1 OBVan

With the UEFA Champions League match Schalke vs. Chelsea Sky Germany has demonstrated its pioneering credentials once again. Together with the production company TopVision Sky Germany integrated a 4K SuperZoom solution into the HD live signal workflow. The 4K SuperZoom application consisted of a Sony F55 camera and an EVS XT3 server in combination with an AJA Corvid. The RCP for the Sony F55 was operated as any other RCP on board of the TopVision HD Ü5.1 OBVan.

The 4K SuperZoom solution delivers brilliant sharp close-ups that provide innovative, detailed pictures – particularly rewarding when it comes to debatable referee decisions! Thanks to the high resolution of the 4K format, image details can be selected for demonstration purposes and played back in full HD resolution. That means that the viewers at home see much more than the referee on the pitch.

With the 4K test recording of the soccer match between Bayern Munich and Borussia Dortmund in December 2012 and a first off-air test of the 4K SuperZoom at the UEFA Semi-Final Bayern Munich vs. FC Barcelona in April this year, Sky made the first move towards the next generation of television.

Alessandro Reitano, Director Sports Production at Sky Germany explained: “In addition to the integration of 4K recording technology in a live broadcast, the goal at the Veltins Arena was to test the signal flow and the use of 4K cameras with lenses and accessories suitable for live event coverage,” and he continued, “4K is incredibly exciting for us and even more exciting for our customers. Currently 4K/UltraHD is still a thing for the future, but at this early stage, the first experiences are already amazing. The test today at the UEFA match is just another of many more steps to underline Sky’s position as an innovation leader in the TV and entertainment area in Germany and Austria. We foster development in order to be the front-runner in the next TV revolution and to offer our customers the best entertainment experience possible. 4K/UltraHD delivers spectacular detail that opens the possibility for a whole new way of shooting and presentation on large screens in our customers living rooms.”

Sony F55 with EVS XT3 and AJA Corvid
The Sony F55 with an Aladin MKII focus, zoom and iris controller from Chrosziel now allows to attach any PL mount lens to the camera. At the Veltins Arena a Canon 30 – 300 PL lens was on hand. The camera was positioned close to camera 1 (the main camera for the HD production) high at the middle of the arena. The camera was tied electronically to an EVS XT3 and an AJA Corvid. This combination enabled the operator to zoom into the picture and to replay the particular part in slow motion. 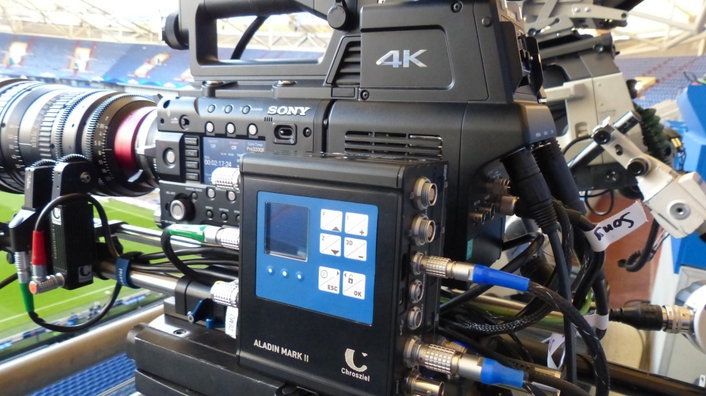 The Sony F55 with an Aladin MKII focus, zoom and iris controller from Chrosziel

Right from the beginning the EVS XT3 server platform was designed to be future-proof and was developed with massive internal bandwidth and processing power. Most importantly, it was built to be flexible in configuration, allowing bandwidth, I/O and storage capacity to be determined to suit the application. This allowed the configuration of four 3G SDI feeds as a single logical channel. This was the form in which the 4K signal from the F55 camera was received.

Importantly, the flexible configuration of the XT3 server means the four channels are bonded, so a standard LSM control panel was used to control the 4K recording and replay. LSM operators will need no further training, and will notice absolutely no difference in working with 4K content, apart from better pictures on the monitors. 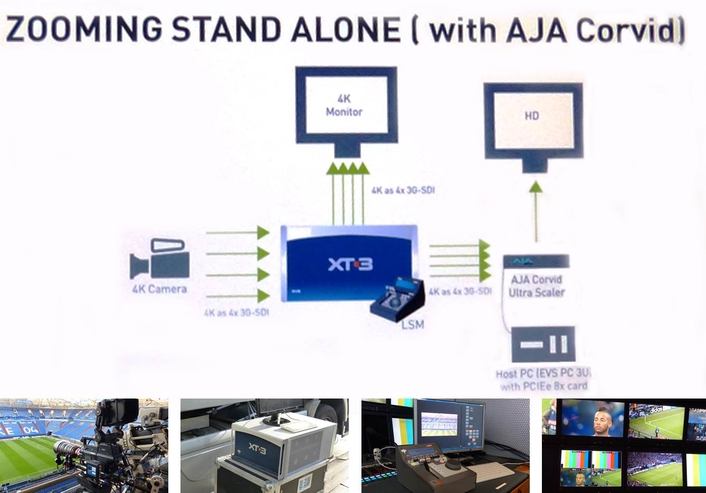 The use of the standard XT3 platform means that all the functionality of the server remains available, including off-speed playback for slow motion replays. Together with the AJA Corvid the solution addressed the option of zooming in to a 4K picture. However EVS servers have long supported a feature called Target Track, which allows an operator to identify an area of the picture and zoom in to it. The zoom function was realized by a first version of a touch panel (which currently is operated via a mouse). 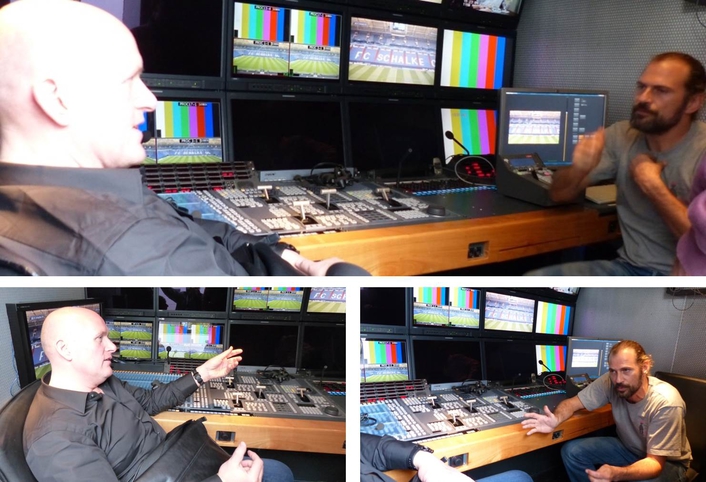 Already prior to the match, the director Jürgen Kress discussed possible workflows with the EVS operator Ralf Armbrüster. Already in the warm-up time of the teams the 4K SuperZoom was on air with great success and more than once during the match, e.g. the first goal of Chelsea was replayed by using the digital SuperZoom features.

“These are exciting times for our industry,” states Brian Sullivan, CEO of Sky Germany. “There are many new and innovative ways for consumers to access content and to enjoy it. Ultra-HD is one of the most promising solutions – even if we are still in an early development stage. However Ultra-HD has the potential to revolutionise the visual experience in the future. Already today we have new production and transmission functions such as a SuperZoom that highlight the amazing resolution and granularity. As innovation leader in Germany and Austria, we want to make sure that our customers will have the privilege to enjoy the best entertainment experiences.”

“By 2020 there will be over 200 Ultra HD channels worldwide, rising to over 1,000 by 2025. The availability of Ultra HD TVs in the home and Ultra HD services by pay TV operators with advanced set-top boxes will drive the commercial opportunity for channel launches and content production,” says Morrod.